Good evening BellaNaijarians and welcome to another weekly round up of trending news stories that made headlines across the country this week.

How has your week been? We hope it has been splendid!

As usual, it’s been an eventful week and the headlines have been buzzing with a range of news stories. BellaNaija has prepared a recap of major stories that made headlines this week. We hope you have an interesting time as you catch up on the happenings across the country.

The Commissioner of Police in Imo state, Adisa Bolanta, has confirmed that the family of Nkiru Sylvanus, the abducted Nollywood actress paid N8 million ransom before she was released. Nkiru was kidnapped In Imo State last Saturday but was released alongside former Mr. Nigeria, Kenneth Okolie, on Thursday 20th December 2012. Bolanta told newsmen in Owerri on Friday that the family defied repeated warnings from the police not to negotiate or pay any ransom to the abductors.He said the family of the Special Assistant to the Governor on Public Affairs, did so without the knowledge of the police.

There has been a slight improvement in candidates’ performance in the November/December 2012 West African Senior School Certificate Examinations – with 150,615 candidates, representing 37.97 per cent of the 396,614 that wrote the examination recording credit passes in five subjects, including English and Mathematics. Announcing the results of the examination on Friday, the Head of Nigerian National Office of the West African Examinations Council, Mr. Charles Eguridu said that last year, only 139, 827 (36.07 per cent) of the candidates that wrote the examination made the minimum benchmark for entry into tertiary institution, while 24.16 per cent achieved it in 2010.

The trial of the 13 persons accused of the murder of four students of the University of Port Harcourt (UNIPORT) on October 5th 2012 was stalled on Thursday due to the failure of prisons officials to produce them in court. This came as the police arraigned three more persons for the murder of the students. At the resumed hearing on Thursday morning, the prosecutor told the court that the accused persons were in the court cell, but could not be brought in because of shortage of prison personnel. The students were killed by a mob in Omuokiri village of Aluu, a neighbouring community to the university.

An electrical fire was on Thursday morning reported at the Murtala Muhammed International Airport, Ikeja, Lagos. An eyewitness said the fire emanated from some cables, which apparently melted under heat, as some welders were working at the extension of ‘D’ Wing of the international airport. Airport officials swiftly cut off power supply to the arrival and departure halls, in order to forestall any untoward development and isolated the scene of the spark. Billows of smoke were observed rising to the sky from behind the arrival hall.

The final burial rites of Late Governor Patrick Yakowa of Kaduna State was concluded this week in his home town of Fadan Kagoma in Jema’a LGA of the state amid tears and eulogies. The funeral service which held at Saint Paul’s Catholic Church, Fadan-Kagoma Thursday morning, witnessed many top politicians across the country break down in tears as the remains of the late governor was brought into the Church. The former governor’s widow, Amina, who had earlier been condoling with sympathizers and villagers; at the sight of the casket bearing her husband’s remains, broke down, sobbing uncontrollably. 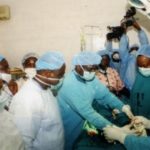 A major medical breakthrough has been recorded in the nation’s capital, Abuja, as a team of Nigerian doctors have successfully carried out a kidney transplant operation on a 20-year-old patient, Gabriel Onogu. The landmark operation took place last Friday at Viewpoint Hospital in Gwarimpa Estate, Abuja by a team of surgeons led by Mr. Elijah Maina and his partner, Prof. Hakeem. Three more patients are on the list for transplant which the hospital believes will also be successful. Maina, a consultant, trauma-vascular and general surgeon, had worked in the UK before he came back to Nigeria.

Operatives of the Economic and Financial Crimes Commission (EFCC) on Wednesday, December 19, 2012, arrested one Bashir Abdu at the Mallam Aminu Kano International Airport, Kano over money laundering. Abdu, a Nigerian but with a Dubai resident permit was on his way to Dubai on board Egypt Air when he was arrested by the EFCC for failing to declare the $130,000 (One Hundred and Thirty Thousand dollars) on him. He only declared the gold bars with him and 30, 000 Saudi Riyals.