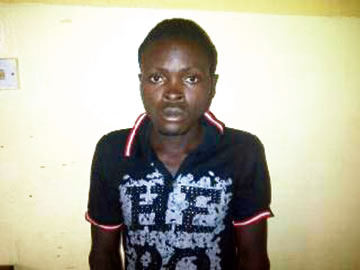 Kayode Akanni,  a 25-year-old man, has been arrested by Ogun state police for allegedly raping a 3-year-old girl

Police Public Relations Officer, Muyiwa Adejobi, disclosed the incident via a statement yesterday, Vanguard reports.
Adejobi stated that the parents of the girl contacted the police when they noticed bruises on girl’s genitalia. Investigations led to the arrest of the suspect, Akanni, who reportedly confessed to committing the crime.
The victim has since been hospitalized.
“The Commissioner of Police has condemned the act and promised to carry out thorough investigation and perfect prosecution of the matter as such will deter people from engaging in such barbaric act,” Adejobi said.
Photo Credit: Punch
Related Topics:child abuseKayode AkanniMuyiwa AdejobiRape
Up Next