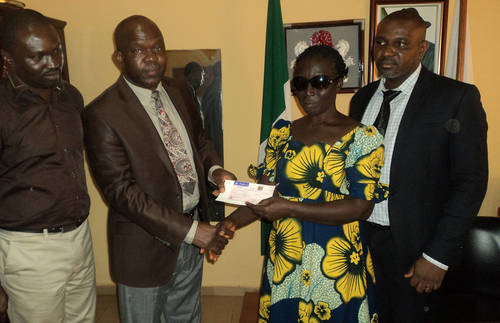 The Economic and Financial Crimes Commission (EFCC) said it recovered N550,000 from a gang of fraudsters who swindled a blind woman, Mary Ihekanacho of N830,000 in a job scam.

Wilson Uwujaren, spokesman of the EFCC in a statement in Abuja said the draft of the recovered money was presented to the victim on Wednesday.

The statement said the syndicate had conned the woman by promising to facilitate her son’s employment with one of the major oil companies.

It said the fight against corruption was a collective one.

The statement called on the public to support the commission in the discharge of its duties by coming forward to give evidence in court when needed.

It commended officers of the commission for their passion to ensure that the matter was followed to its logical conclusion.

“I had lost hope. I prayed and asked God to take control and was surprised when Richard called me and told me that the young man has been arrested,’’ the statement quoted Ihekanacho as saying.

She called on Nigerians to support the EFCC in its effort to rid the nation of fraudulent activities.