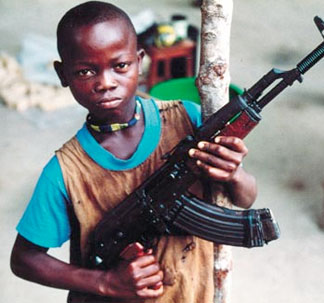 Oyo State Police Command is to rehabilitate 11 child robbers arrested in Ibadan, the state capital, on June 15, the Commissioner of Police, Mohammed Katsina, said on Thursday.

Katsina, who disclosed this in an interview with the News Agency of Nigeria (NAN) in Ibadan, added that the arrest of the kid robbers was part of initiatives by the command to ensure a crime-free environment in the state.

He further stated that some of the kid robbers, aged between 12 and 14, conspired and invaded a house around the Challenge Area of Ibadan, where they stole the sum of N11,000.

“Based on information, the Anti-Robbery Squad of the command was sent out immediately and they were surprised to see kids of 12 and 14 years of age coming out to make confessional statements,” he said.

Katsina, who also expressed pity on the plight of the kids, explained that they voluntarily narrated to the police details about their activities.

He lamented that the involvement of the kids in robbery activities could be attributed to lack of parental care and poverty.

“Most of these children are from broken homes and I wish parents can learn from the plight of these kids and take proper care of their children.

One thing that keeps disturbing me is the voluntary narration and sincerity of the kids. They have no shelter of any sort and to them, their future starts and ends on the bridge.

Their only means of livelihood is to savage innocent members of the public, be involved in pick pocketing, robbery and related criminal activities,” he said.

Katsina noted that 90 per cent of the kids arrested were not residents or indigenes of Oyo State.

“Some of them are from Benin Republic in search of greener pastures in Nigeria, in a negative way,” he said.

The police boss disclosed that one of the 11 kid robbers, a 12-year-old boy, was apprehended in Ogbomoso in a robbery-related conduct.

“In the course of the arrest, he led us to six other members of his group, where four of them were minors and the two others adults.

The boy is from Kwara State, as we got to know from his confession. He confessed that his father was living happily with his mother until he married a second wife.

As a result of that, there was a problem and the mother moved out with the kid robber and relocated to Ogbomoso,” he said.

Katsina, however, added that the command was currently taking care of the 11 arrested minors.

He also said that Governor Abiola Ajimobi had promised to assist in the rehabilitation and provision of adequate care for the kids.

“When I spoke with him, he said that there were rehabilitation centres in Ibadan, where the kids would be provided with basic care amenities. The governor also said that the state government would assist to provide job opportunities for unemployed youths in the state at the newly-inaugurated Waste-to-Energy projects.”

The Oyo police boss, however, called on parents and the governments of the neighbouring countries to monitor the activities of their children and wards, while admonishing Nigerians and philanthropists to assist them.