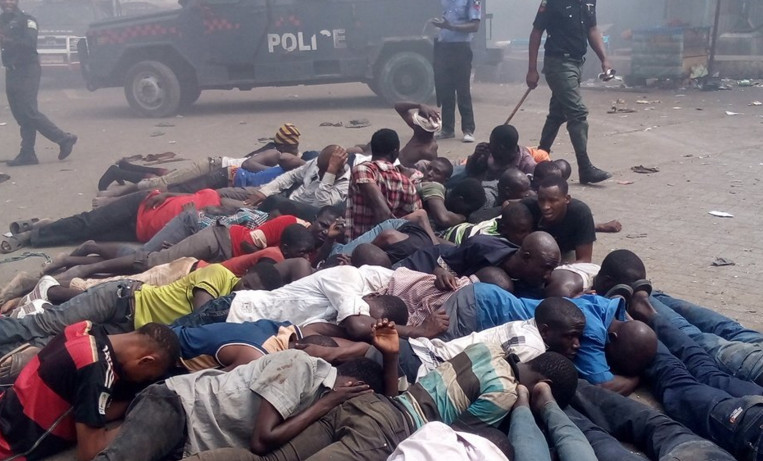 Suspects Ordered to Lie Down by Rapid Response Squad

Yesterday saw the apex of an inter-ethnic clash between Hausas and Yorubas in the Mile 12, Ketu area of Lagos. Unfortunately, at least 10 lives were lost, 40 houses burned to the ground, many cars and property razed and vandalized and many people still missing, including a 19 month old baby.

The conflict was said to have started on Wednesday. An okada (commercial motorcycle) operator injured a woman at Mile 12 market. The okada man refused to take the woman to hospital, resulting in her death. That night a series of clashes occurred between Hausa and Yoruba residents of the area. 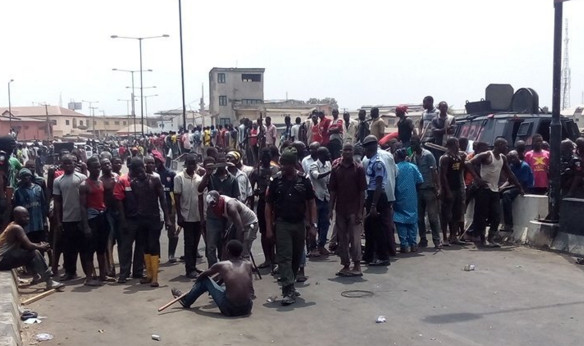 Yesterday Governor Akinwunmi Ambode of Lagos State responded immediately, assuring Lagosians that the state is for all ethnic groups, while imposing closure of the popular Mile 12 market and some streets in the area to ensure people’s safety. 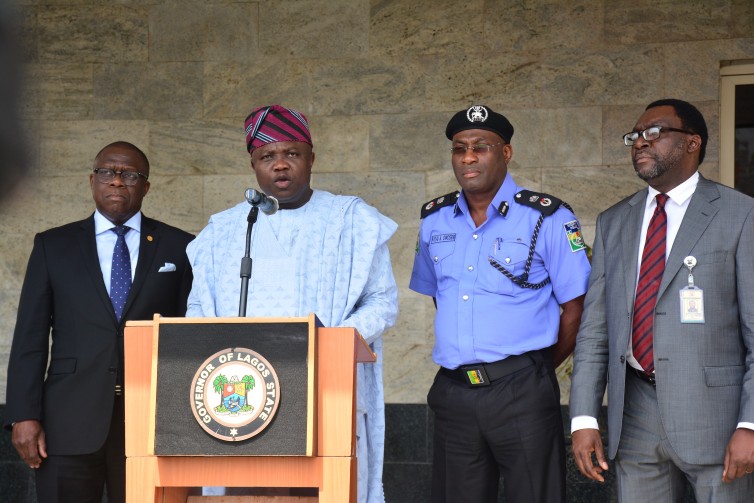 “Let me assure Lagosians that the state is home to every tribe and ethnic group and nobody should give this disturbance any ethnic coloration whatsoever. Every law abiding citizens should go about their normal businesses.”

“In order to further restore calm, I have ordered that Mile 12 Market be temporarily closed and urged traders, community leaders and other stakeholders to eschew violence; be calm and law abiding.

“Furthermore, I have also ordered a temporary restriction of movement in the following streets; Oniyanri Street, Maidan Street, Agiliti 1 and Agiliti 2,” he said.

The Governor said the police and security operatives have been deployed to the area to quell the dispute, assuring residents that peace will be restored in the area.

“I have just been informed that some miscreants and criminal elements have exploited that dispute to cause a breakdown of law and order within the area. These types of clashes do occur from time to time in a multi-ethnic city like Lagos and the government has responded appropriately.

“The public is hereby assured that we will not shy away from our responsibilities to protect lives and property and we will deal decisively with those criminal elements who fan the embers of ethnic strive”.

You can read his statement in full on his website.

The Mile 12 Perishable Traders Association today appealed to the Lagos State Government to reopen the market, so they can continue to make a living.

A resident of Agiliti Street in Mile 12, near Lagos, Danjuma Jubril, on Friday pleaded with the police authorities to provide adequate security for the burial of people killed in the bloody clash in the area on Thursday.

Jubril told the News Agency of Nigeria (NAN) that the tense security in the area was not conducive for proper interment of the dead.

”Some of the corpses are inside Agiliti River. We cannot bury or retrieve the bodies in the river because of the security situation. The burial ground we use is at Agiliti. We have sent message to the DPO in charge of this area that we need police escort to bury them.”

Jubril, who said he was born at Mile 12 more than 30 years ago, blamed the deadly clash on hoodlums extorting money from commercial motorcyclists and trucks carrying food items.

He advised that armed security men should be stationed permanently in the area in view of the incessant clashes.

”Security agents did not respond quickly when we called them. If they had responded immediately, the crisis would have been contained in time,” Jubril said.

NAN reports that a detachment of armed policemen, soldiers and civil defence corps had been patrolling the areas, where ethnic Yoruba and Hausa-Fulani people engaged in hand-to-hand clashes resulting to many deaths.