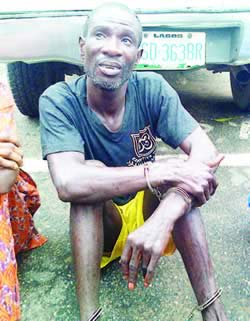 The Lagos Police Command has arrested the mastermind of the Babington Macaulay Junior Seminary Schoolgirls’ abduction.

According to PUNCH, 37-year-old Felix Sylva from Delta State, was arrested by the operatives of the Special Anti-Robbery Squad at a hideout in the Arepo area of Ogun State, on Saturday.

“Lamiameni and I got the job of the Ikorodu schoolgirls for our gang. There was a third leader, called Millions. In the end, I made N300,000 from the schoolgirls’ abduction. I was a timber dealer in Delta State before coming to Lagos State.

I stayed in the Majidun area and I have two children. I went with the gang on the day we abducted the schoolgirls. Lamiameni and others held guns. I did not. My role was to talk to the families of the schoolgirls after the whole operation.

We carried them through the bushes. I did not let anyone rape them. If a gang member should rape any victim, we would kill him. After the Ikorodu incident, I fled to the Igbo Olomu area. It was at Igbo Olomu that I coordinated the kidnap of the Chinese manager. I got N250,000 from that operation,” Sylva said, speaking to PUNCH’s correspondent.

Sylva said that he has coordinated 3 kidnap operations, including that of the schoolgirls since he arrived Lagos from Delta State. He said the second was that of a Chinese construction manager, Hang Kumming in the Igando area of Lagos. He also disclosed that a worker in the construction company, Amos Loko, who was earlier arrested by the police in connection with Kumming’s kidnap, brought “the job of the Chinese man”.

“I have coordinated only three kidnap operations in Lagos State. The third was at a cement factory. It was Amos Loko , alias Mosquito, who brought the job of the Chinese man. I was trailed and arrested in the Arepo area. I was with my girlfriend when the policemen came to arrest me. I am called Tradition because my father is an Ijaw herbalist,” he said.

Militancy: Niger Delta Avengers Did not Blow Up Any Pipeline in Akwa Ibom – Police

Such Fun! Check out Photos and Videos of 2Baba & Annie Idibia’s Exciting Safari Visit in Kenya