"Apostle Suleman, I do not think you are guilty...I will stand by you" - Reno Omokri

Reno Omokri took to his Facebook page this morning to share his thoughts on the scandal involving Senior Pastor of Omega Fire Ministries, Apostle Suleman.

According to Reno Omokri, so many people have judged the Pastor based on assumptions and hearsay. He went further to take a stand with the Pastor stating that he doesn’t think he is guilty but that either way, he’ll stand by him. 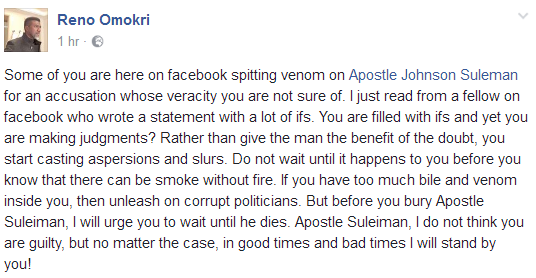 Lagos Govt to Introduce 5,000 Air-Conditioned Buses to Replace “Danfos” from 2017