The General Overseer of Omega Fire Ministries (OFM) Worldwide, Apostle Johnson Suleman is currently involved in a messy scandal with Stephanie Otobo aka Kimora, a singer based in Canada.

A report by Sahara Reporters, claimed that Stephanie was sexually involved with the clergyman, and he had also promised to marry her.

However, things went berserk when Stephanie was arrested by officers of the Federal Criminal Investigations Department (FCID) of the Nigeria Police Force on Friday, March 3 2017 at an ATM spot in the Anthony Village area of Lagos.

According to two letters published by Sahara Reporters on Twitter, Stephanie, through her lawyer, Festus Keyamo had written to Suleman to demand that he pays the sum of N500m for his breach of promise to marry her.

The report stated that Suleman had done a formal introduction by visiting Stephanie’s parents with food and drinks, adding that Suleman urged Stephanie to get pregnant because he desires more male children.

Sahara Reporters said that the letters were written to the Inspector-General of Police (IGP), Ibrahim Idris following Stephanie’s arrest.

See the letters below: 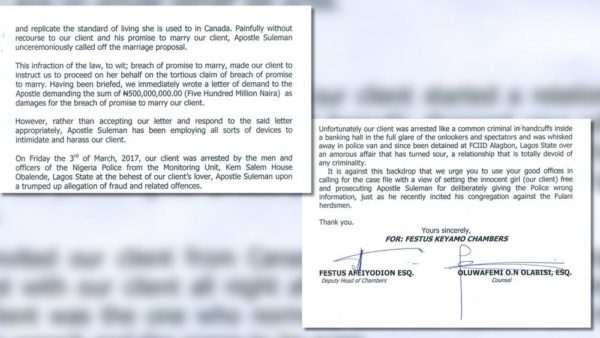 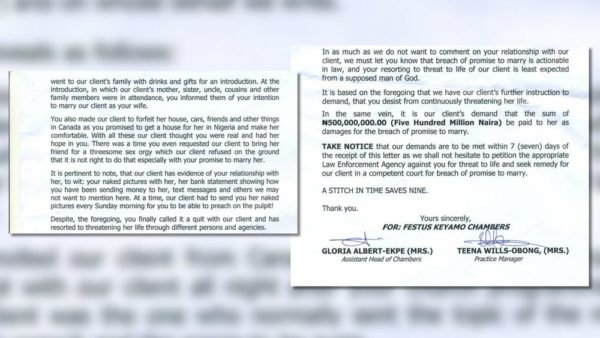 Suleman, in a statement on Monday by his Communications Manager, Phrank Shaibu, said that Stephanie was arrested for trying to blackmail the clergyman by threatening to expose a relationship that never existed.

Shaibu added Keyamo was being misled and there is no evidence to support Stephanie’s allegations.

Shaibu said Stephanie was arrested by operatives acting on a tip off that she had repeatedly tried to blackmail the fiery preacher by demanding N500 million from him.

Shaibu’s statement, published by The Sun, reads in part.

“Unknown to Keyamo, the police was alerted following several attempts by the said lady to blackmail Apostle Suleiman. The police also recorded her conversations making the frivolous demand. The high-point of the drama was her attempt to withdraw money paid into her account at the instance of the police. The lawyer should know that his client was arrested by the police with abundance of evidence confirming that she is indeed a serial blackmailer.

Let me place it on record that, the lady in question is a self-confessed stripper in a nite club in Canada, who like thousands of people that seek help from Apostle Johnson Suleman, called to pretentiously convey her intentions to embrace Christ and also needed financial help to keep body and soul as she no longer had a means of livelihood after quitting as a stripper.

Does Keyamo or his serial blackmailing client have pictures of the visit by Apostle Suleman or his representatives to her parents? In any case, how could such a relationship have existed when the Apostle and the said lady have never met physically? How could he have made a promise of a house and a lifestyle comparable to what she has in Canada when he has never been to her house or seen her physically as to have an idea of her living standards?

If Keyamo was not misled or excited by the prospects of a jackpot of N500 million and or an opportunity to save his already dwindling career in law practice from total caput by latching on the popularity of Apostle Suleman via this tendentiously devilish plot and skewed romantic fantasy, then we may as well demand an evaluation of his mental state along with his client who was obviously on the verge of delusion before she was arrested.

It’s either one of the options stated above or he is trying to engage in a proxy war on behalf of some unknown agents who had become irritated by Apostle’s stand on national issues. His inference to the latter incident in Keyamo’s letter to the Inspector General of Police (IGP) confirms this benign thought.

The nature of their mental torpidity is understandable and we invite more recondite and decent persons to read in between the lines and separate the wheat from the chaff.

In this well coordinated plot to pull down Apostle Suleman at all costs, the lines of Reuben Abati will suffice; ‘lies have become standard stuff, mischief a major commodity, and indecency a character flaw.’

If Keyamo and his Canada-returnee client think they can capitalize on the famed generosity of Apostle Suleman to extort N500 million through this plot, they sure have missed it as shall have our day in court.