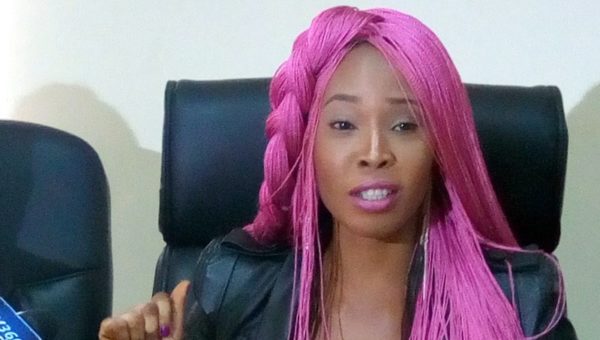 Canadian based singer Stephanie Otobo has been re-arraigned by the Nigerian Police alongside one Wisdom Godstime over alleged blackmail and threat to life, conspiracy, and intent to steal.

The Nation reports that they were arraigned before Magistrate Kikelomo Bukola-Ayeye of the Tinubu Magistrates’ Court in Lagos.

The police had, while seeking a remand order on March 6, accused the duo of “terrorism”.

Magistrate Bukola-Ayeye ruled that the police lacked substantial evidence to support the accusation.

The prosecutor, M. A Animashaun, informed the court that the defendants and others at large allegedly committed the offence at about 10.30AM on February 14, 2017, at Police College, Ikeja, Lagos.

Animashaun said that the suspects conspired to steal by demanding for property with menace and attempted to extort money from Apostle Johnson Suleman, the General Overseer of Omega Fire Ministries (OFM) Worldwide.

The prosecutor, accusing the suspects of blackmail, added that they “unlawfully demanded the immediate payment of $1million to Otobo by Apostle Johnson Suleiman, the president and founder of Omega Fire Ministry Worldwide, else she would call a press conference and accuse him of committing adultery with her and thereafter kill him.”

Animashaun claimed Stephanie threatened to call a press conference, where she planned to accuse Suleman of adultery and threatening to kill her.

Stephanie Otobo and her co-defendant pleaded not guilty to the charges.

They were then granted bail in the sum of N100,000 each. The case was then adjourned to April 27 for commencement of trial.