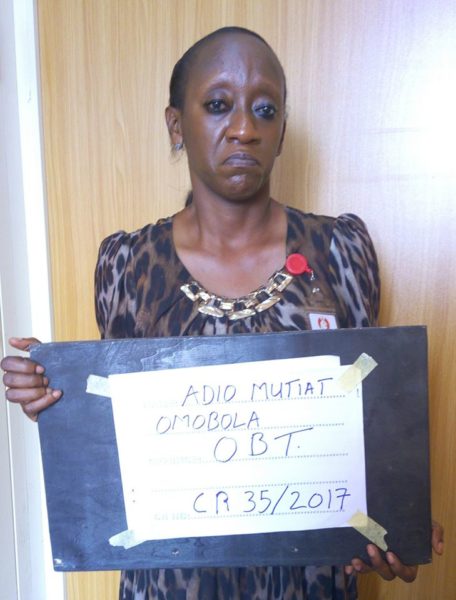 The Economic and Financial Crimes Commission (EFCC) on Friday arraigned a deputy chief registrar of the Ibadan Judicial Divison of Oyo State High Court, Mutiat Omobola Adio, before Justice S. Olagunju of the Oyo State High Court on a 2-count charge of fraud to the tune of N9.2million.Adio allegedly collected the said sum as payment for a property located at Plot 10, Block XXIV, Bashorun Estate, Ib.

Adio allegedly collected the said sum as payment for a property located at Plot 10, Block XXIV, Bashorun Estate, Ibadan, who was sold to Yekini Olonade, but failed to surrender the title documents of the property to him. Efforts of the victim to either recover the money or have possession of the property yielded no result.

The offence is contrary to Section 1 (2) of the Advance Fee Fraud and Other Related Offences Act, 2006 and punishable under Section 1 (3) of the same Act.

In view of her plea, counsel to EFCC, Oluwatoyin Owodunni, asked the court to fix a date for the prosecution to present its witnesses and for the defendant to be remanded in prison custody pending trial. Justice Olagunju then adjourned the case to May 5, 2017, for the hearing on the bail application while the defendant will be remanded in prison custody according to the judge’s order.