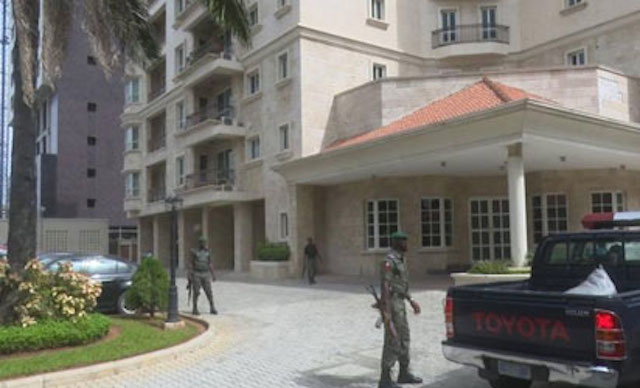 The Economic and Financial Crimes Commission (EFCC) , today told a Federal High Court in Lagos that the apartment on Osborne Road, Ikoyi, where $43.5million was found in April, was bought for N360million by a company owned by Folashade Oke, wife of the suspended Director-General of the National Intelligence Agency (NIA).

In an affidavit and exhibits tendered to support a prayer for the permanent forfeiture of the money to the Federal Government, the EFCC said a company called Choba Ventures Limited bought the Flat 7 and paid for it between August and September 2015. Fine and Country Limited was the vendor.

Up till now, despite notices published in newspapers, neither Mrs Folashade Oke nor Choba Ventures had stepped out to claim the money. However, the husband of Folashade, Ambassador Ayo Oke had claimed before a Presidential panel, headed by Vice-President Yemi Osinbajo that the money belonged to the NIA. Reports said the money was part of the $285million withdrawn from the account of an NNPC subsidiary, on the orders of former President Goodluck Jonathan in 2015.

In the affidavit filed in support of its prayer for forfeiture, the EFCC tendered the receipt of payment to Choba Ventures Limited issued by another company Fine & Country Limited. The agency also tendered a Deed of Assignment between Union Bank of Nigeria plc and Choba Ventures Limited. while the third exhibit is a publication of the order of the court .

EFCC lawyer, Rotimi Oyedepo said the commission’s finding in the course of investigation leaves no one in doubt that flat 7, Osborne was purchased by Choba Ventures Limited and that the company’s directors are one Mrs Ayodele Folashade Oke and her son. The agency said Folashade Oke, to buy the property, gave $1.658m to Salla Petroleum and Gas Limited which turned out to be a bureau de change company. The latter converted the money to Naira and credited the account of Fine and Country.

Upon the payment, a Deed of Assignment was then executed between UBN and Choba Ventures Limited.

Oyedepo therefore urged the court to hold that the commission’s submission that the house and the money found in it are reasonably suspected to be proceeds of unlawful act. He also urged the court to agree to permanently forfeit the money to the Federal Government in view of the fact that no one has come forward to lay claim to the money within the 14 days given by the court.

The EFCC had during the raid on the Flat last April recovered $43,449,947, £27,800 and N23,218,000. The money was stashed in iron cabinets and “Ghana must go” bags. The commission said in coming forward to seek the order for final forfeiture, it has complied with the court directives as contained in the earlier order of interim forfeiture granted by the court by publishing the order in a national daily newspaper. The commission said it did not only publish the order of interim forfeiture, it went further to serve the motion and order on the owner of the property where the money in question was found.

Justice Muslim Hassan had earlier granted an order of interim forfeiture which must be published in a national daily newspaper to allow anyone interested in the money to come forward within 14 days and show cause why the money should not be permanently forfeited to the Federal Government of Nigeria. The anti-graft agency said so far nobody has come forward to show interest in the huge money found.

Justice Hassan has adjourned ruling till 6th of June.