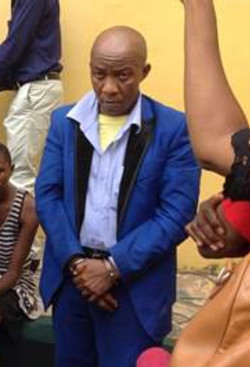 Acting on a tip-off, police officers, attached to the Ariaria Division of the Abia State Police Command moved in on one Christopher Tochukwu, a pastor with a Pentecostal church who allegedly operates a baby factory at No. 252 Faulks Road, Aba.

Tochukwu, who was also arrested on suspicion of raping young girls, uses the a the one-storey building as his church, as well as medical centre for the pregnant girls, DailyPost reports.

Four girls – three of which are pregnant and one whose baby had been sold to a yet to be identified woman – were rescued. A two-week old premature baby was also rescued.

One of the victims Imeabo Udo said a young man took her to the medical centre and promised to help her take care of her 2-year old baby. She said that when she got there, the toddler was taken from her and sold to a yet to be identified woman.

The three other victims Jane Ikechukwu, Blessing and Gift, said they were also taken to the same Clinic for antenatal care and were forced to stay there for more than one month.

“The pastor (Tochukwu) was coming to rape us one after the other. It was while he was raping one of us, that the girl fought him and wounded him with a broken glass. It was the girl that escaped through the window and alerted the Police,” blessing said.

Tochukwu, who said he is a nurse, however, denied the rape allegations, stating that he was only helping them.