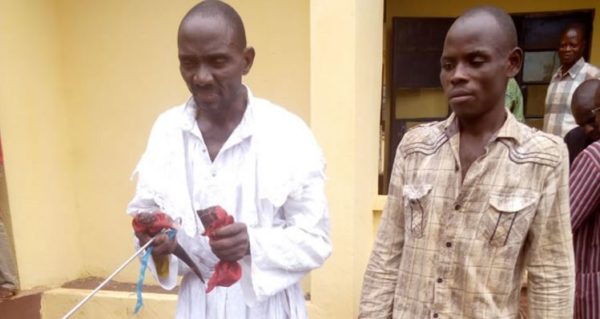 A prophet and an accomplice have been arrested by the Ogun State Police Command on suspicion of the murder of a 13-year old girl.

The accomplice Musiliu Jibril allegedly lured the girl to the prophet Kehinde Onayiga‘s church and killed her, Punch reports.

According to Jibril, Onayiga contracted him for N20,000 to kill a virgin girl who was to be used for rituals to strengthen some internet fraudsters (Yahoo boys). He said:

I was able to lure the girl because she and her mother trusted me. It was the prophet that contracted me to get a female virgin for ritual. He told me he wanted to prepare some charms for some Yahoo boys.

I delivered the girl to him in his church at Sagamu and he promised to pay me N20,000. I am yet to get the money.

Onayiga, who claimed to have trained under an Islamic cleric before  leaving to start a white garment church, denied the allegations.

He said: “It is a lie; he did not deliver any girl to me in my church.”

He was dressed in a flowing white garment and had with him two goat horns wrapped in red cloth.

When asked what the goat horns were for, he said: “I use them to pray for those brought to my church for healing.”

#NVLoungeDanceContest: Show your best Dance Moves & Get on your Way to Winning N100,000 from NV Lounge, Owerri