Police arrests 7 after Discovery of Ritualists' Den Under Expressway 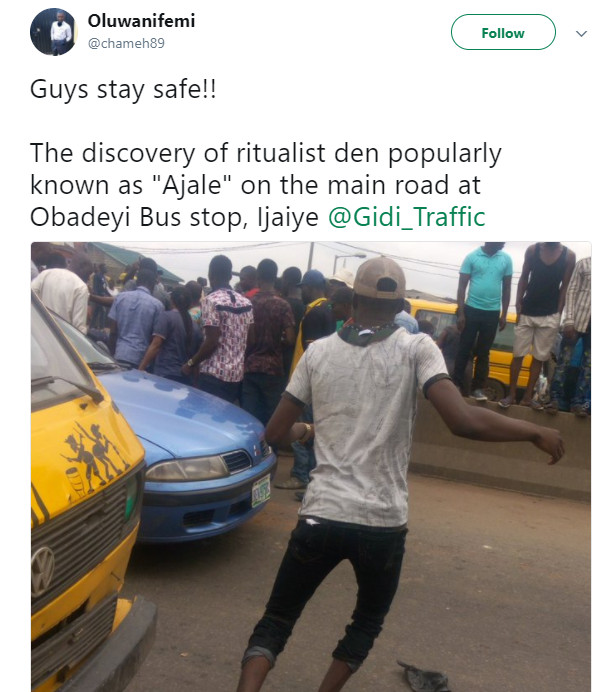 The police in Lagos have arrested seven suspected ritualists following the discovery of an underground kidnappers’ den at Obadeyi in Ijaye area of the state.

The Lagos State Commissioner of Police, Fatai Owoseni, told newsmen at the scene on Tuesday evening that the dungeon was discovered by joint efforts of security agents and members of the public.

According to Owoseni, the place was discovered after a highway sweeper with the Lagos State Waste Management Agency (LAWMA) raised an alarm when she heard the voice of a woman calling for help from the canal.

He said that two of those caught were set ablaze by the mob before the arrival of the police at the scene.

“In the process, people moved in there to help and also noticed that some persons who had some charms like gourd in their mouths tried to escape and that made the crowd to suspect something unusual.

For now about seven persons, who are suspected to be using those buildings as base for rituals, have been arrested.

We will continue to give it a touch of professionalism and scientific approach by deploying sniffer dogs that can also penetrate into the canal to see whether we can get materials to be of evidential value,” Owoseni said.

Items including clothes, under wears, identity cards and wigs of people suspected to be victims were seen at an abandoned house near the canal reportedly used as a hideout by the suspects.

According to an eyewitness who pleaded anonymity, two of the kidnappers had come out of the canal in an attempt to escape but they were overpowered by the angry mob.

Fatai Ajibola, an eyewitness, said that some members of Oodua Peoples’ Congress also went into the dungeon to continue with the search and recovered shoes, clothes and other female items.

A resident, who identified himself simply as Kunle, said the discovery of the den came as a surprise to most members of the community.

“Most of us in the estate pass through the bridge on daily basis without observing such a thing under the bridge; only God knows how many people that have been killed by the ritual killers in the dungeon.” he said.

The police commissioner said that investigation was underway and assured that perpetrators would be made to face the full wrath of the law.