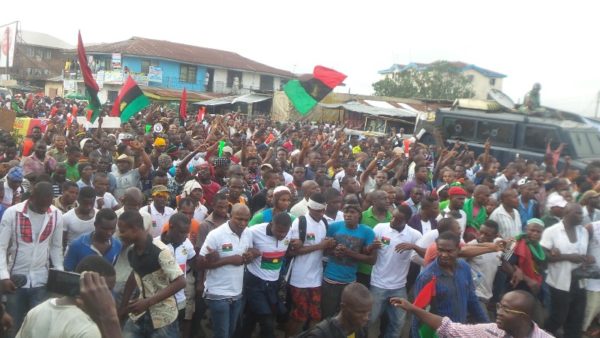 The Federal Government has in its Gazette published the proscription of the secessionist group Indigenous People of Biafra (IPOB) and declared it a terrorist organization.

Publishing in its Gazette is a part of the procedure required of the Federal Government before the group can be legally proscribed, Punch reports.

Abdu Kafarati, Acting Chief Judge of the Federal High Court had on September 20 asked the FG to publish the proscription notice in its gazette, as well as in 2 national newspapers.

A part of the gazette publication read:

NOTICE IS HEREBY GIVEN that by the Order of the Federal High Court, Abuja, in suit No. FHC/ABJ/CS/871/2017, dated September 20, 2017 as per the schedule to this Notice, the activities of the Indigenous People of Biafra are declared to be terrorism and illegal in any part of Nigeria, especially in the South-East and South-South regions of Nigeria as proscribed, pursuant to Section 2 of the Terrorism (Prevention)Act, 2011 (as mended).

Consequently, the general public is hereby warned that any person or group of persons participating in any manner whatsoever in any form of activities involving or concerning the prosecution of the collective intentions or otherwise of the said groups will be violating the provisions of the Terrorism (Prevention) Act, 2011 (as amended) and liable to prosecution.

This Notice shall be cited as the Terrorism (Prevention) (Proscription Order) Notice, 2017.

According to The Nation, the accused were ordered to be remanded in Afara Federal Prisons in Aba.

The police had earlier released a statement saying the arrested members of the secessionist group would be tried as terrorists.

The accused were charged with alleged conspiracy, terrorism, attempted murder, and membership of unlawful society.

The case was adjourned until October 25.