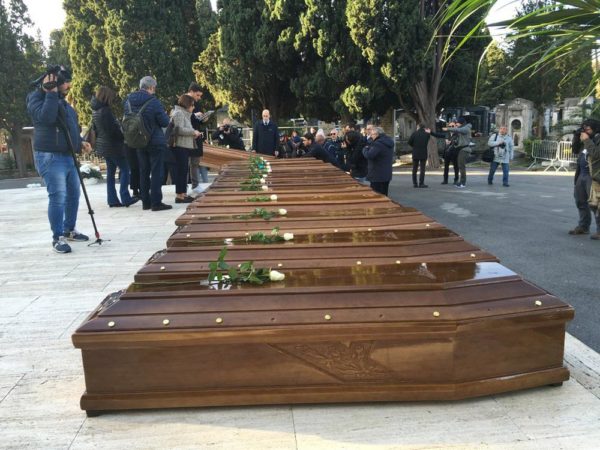 The 26 girls who were reportedly sexually abused and murdered on the Mediterranean Sea while trying to cross into Italy.

2 men had been apprehended in connection to the deaths of the girls, mostly aged between 14 and 18.

A journalist with AP Trisha Thomas shared a photo of the girls in their caskets at the Italian cemetery in Salerno.

At the cemetery in Salerno, Italy with @AP colleagues to cover funeral of 26 young Nigerian women who drowned at sea pic.twitter.com/vRkN8XcCK8

Another journalist with Channel 4 News Paraic O’Brien also shared on his Twitter a clip of women laying flowers on the caskets.

Good morning. I’m in Salerno (south of Naples) to cover the funerals of the 26 Nigerian women (mainly teenagers) who drowned crossing Med on the 3rd Nov. pic.twitter.com/SEXvyjRJ3f

He also shared a close up of 2 caskets with blue flowers for 2 of the deceased who were pregnant.

The 2 coffins with the blue flowers are for 2 of the 26 women who were pregnant pic.twitter.com/6JbAKXW6fH

The Nigerian Government is still yet to release a statement concerning their deaths, amid criticism.

Get Ready to Party with your favorite Artists at the Music and Deals Festival by Trace and Jumia I Saturday, Nov. 18th

Dentine Sensitivity! No more Worries about Teeth Sensitivity as Sensodyne launches an Online Platform for check up