"Their shameful story... is fake news" - Fani-Kayode reacts to report Accusing him of Domestic Violence 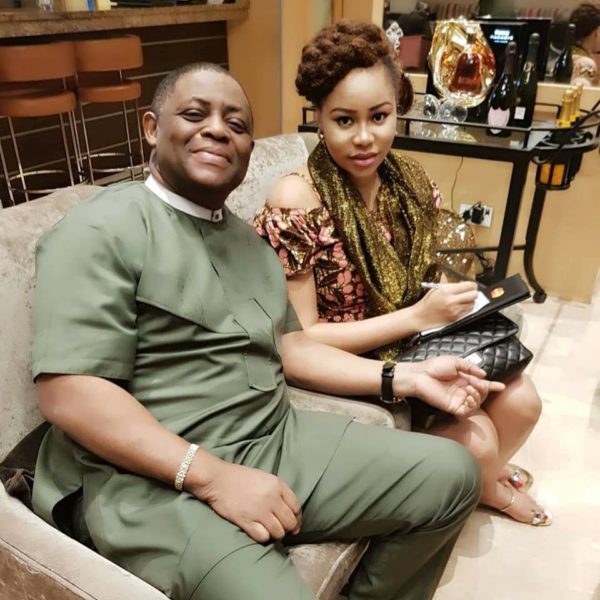 Former minister of aviation Femi Fani-Kayode has reacted to a report by Sahara Reporters accusing him of physically abusing his wife.

In its report, Sahara Reporters said:

In reality, unknown to many, Fani-Kayode had accused his wife of infidelity. The woman, disclosed family sources, is said to be pregnant with a set of triplets. However, the husband is said to be denying responsibility. The former minister, in a text message to members of his family and friends to him and his wife, said he was ‘reliably informed that the children Precious is carrying are not mine.’

Sahara Reporters had also said Fani-Kayode is using a prophecy by Senior Pastor of Omega Fire Ministries (OFM) Worldwide, Apostle Johnson Suleman, which said there’ll be an attempt on the life of Fani-Kayode’s wife Precious Chikwendu, to cover up his marital crisis.

I thank the Lord for using the great Apostle Suleman to expose the evil plan of my adversaries to assasinate my beautiful wife, Precious Chikwendu, in 2018.

The bible says the Lord “reveals to redeem”. They shall fail because she is a daughter of Zion, she is hidden in Christ and she is covered by the blood of Jesus.

If you want a fight face me like a man and leave my wife alone. Only cowards and vermin target the wives of their critics.

No fear! No retreat! No surrender! We are unbeatable!

Sahara Reporters, quoting family sources said Fani-Kayode started physically abusing Precious in the first year of their marriage, adding that she has now left their home and is sleeping at her boutique. The report added that her Mercedes Benz G-Wagon and police escort have also been taken from her.

In another Facebook post on Thursday, Fani-Kayode showered praises on his wife, saying he has “been abducted and forcefully taken prisoner by the most beautiful woman in the world.” “Family is everything,” he added. See the post below:

I have been abducted and forcefully taken prisoner by the most beautiful woman in the world.

We are at a beautiful hotel in Lagos and we are having a wonderful time. Aragorn is part of the conspiracy and he is looking at us and smiling as we are taking these pictures.

Family is everything and I am truly blessed to have Precious. I love you darling. Always will. You are everything to me and you make me so happy.

Thanks for always being there for me. You give me joy. @snowhiteey

Sahara Reporters claimed Fani-Kayode’s “extravagant show of confected affection on Facebook,” is an attempt to mask “the horrors Precious has been subjected to”.

Reacting to the report, Fani-Kayode in a series of tweets described it as a fabrication of “malicious stories,” questioning why the news portal are “so desperate to discredit and raise question marks about Apostle Suleman’s prophecy”. He wrote:

It is obvious that @SaharaReporters have nothing better to do than to fabricate malicious stories. Their shameful story about my marriage to @Snowhitey1 and my children is fake news. People are being killed and our country destroyed and that is the garbage they write? GROW UP!

Why are @SaharaReporters so desperate to discredit and raise question marks about Apostle Suleman’s prophecy that there is a plan to kidnap and assassinate my wife @Snowhitey1 this year? Are they part of the conspiracy? Are they and Buhari planning it together? They will fail!