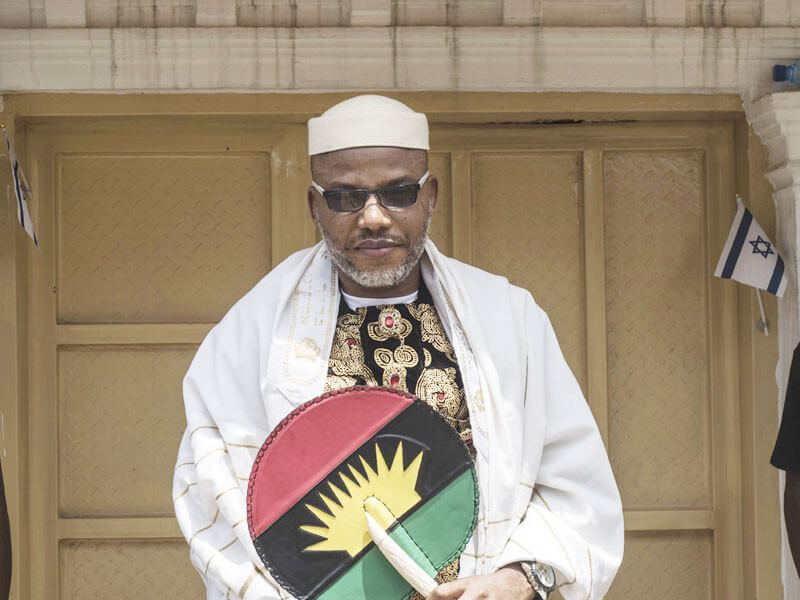 Nigerians are calling for the release of over 100 women arrested by Imo police last week Friday.

The women, members of the Indigenous People of Biafra (IPOB) took to the streets to demand for the whereabouts of their leader Nnamdi Kanu.

Kanu had disappeared last year when there was a clash between him and the military at his residence in Abia last year.

The women were arrested on Friday and charged to court on Monday.

According to Premium Times, the protesters “barricaded the popular Government House Roundabout and created a chaotic atmosphere around the area.” The report also added that the women “disrupted vehicular movement and other activities in some parts of the town.”

Imo Police commissioner Dasuki Galadanchi sent a special team who succeeded in arresting some of them after being met with resistance.

The women were arrested for conducting an illegal assembly and holding an unlawful protest, Imo police PRO Andrew Enwerem said.

Of the 114 women arrested, 2 were said to have slumped before their arraignment, thus causing their names to be removed from the charge sheet.

The 112 women pleaded not guilty to the charges read against them, and were refused bail by the magistrate, S.K. Durumba who adjourned the case to September 3rd.

Punch reports that on Thursday, 15 more women were arraigned for same reasons and were remanded in custody, increasing the number to 127. The report added that at least 25 of the women were moved from the Owerri federal prison to Okigwe prison due to congestion.

Nigerians are calling for the release of the women, using the hashtags #FreeOwerri112 and #FreeTheOwerri114

IG @PoliceNG , how in the world did you put this level of blight on our Democracy with this saga of the protesting Imo women? I read that “the Magistrate says her #court lacks jurisdiction, adjourns till 3 Sept for attorney general’s advice. #Women remanded in #prison.” Wow. How? pic.twitter.com/567eBCDUO2

We need to completely reorientate the @PoliceNG. It is wrong AND ILLEGAL to arrest and harass everyone who peacefully protests against their government. The Owerri women have a Constitutional right to free speech and free assembly. They DON’T need a permit. #FreeTheOwerri114

I'm struggling to get this – unarmed women herded to jail while killers in different parts of #Nigeria roam free?! pic.twitter.com/EbFvGXbNnE

Women went out on a very peaceful protest in Owerri.What does the State do?Arrests most of them after gassing them. No one gassed the same women that were dancing on the streets two weeks ago to receive Aisha Buhari for the August meeting. Time to get angry with your votes.

I condemn the arrest and detention of IPOB women by the security forces in Owerri simply for participating in a peaceful demonstration in support of Nnamdi Kanu and asking for his whereabouts.I call on the government to release the women and let them go home to their families.

In a supposed democracy, #NnamdiKanu and his family just disappeared and we, as citizens, can go to sleep because we feel we don't agree with him or his politics? This official terrorism must stop, #FreeOwerri112. #NnamdiKanu's crime is not overly big for the courts to handle.

@PoliceNG arresting protesting citizens is proof this police needs to be reformed, starting from the IG to the most junior officers. Start with having them recite the Universal Declaration of Human Rights #FreeTheOwerri114

“Where is Nnamdi Kanu?” is a valid question that requires an answer from the Nigerian government. It doesn’t matter whether you agree with whatever he represents or you don’t. I heard some 112 women were arrested for asking this question. That’s an anomaly in a democracy!

INEC says it did not budget N6bn to Feed the Police