#FreeOurGirls: People are Doodling on Burundian President's Photos in Support of Detained Schoolgirls 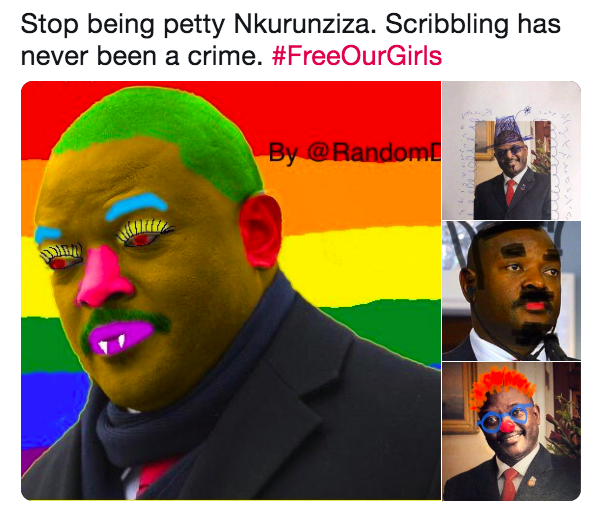 Last week, news filtered in that the Burundi government are holding three schoolgirls in detention, who may face jail term if found guilty, for allegedly drawing on President Pierre Nkurunziza‘s face in their school books.

7 girls had been arrested but 4 were later released and the remaining 3, who have now been identified as Belyse, Eliane and Micheline, were last Monday, charged with ‘insulting the head of state’.

This was not the first time the Burundian government was doing this, in 2016, on two different occasions, school children were arrested for allegedly doodling on the president’s photos.

Now, social media users are showing support for the girls with the hashtag #FreeOurGirls as well as photos of the president with their own doodles.

Doodling is not a crime!
Kumcora Nkurunziza siyo crime!

3 girls risk 5YR detention 4 doodling on Nkurunziza's picture in their text books. There is no proof on who did that; books are shared by all classmates! It is not even clear if it was done this school year pic.twitter.com/2ItSlFl9sZ

I won't shut it: #FreeOurGirls!
Yes, it's worldwide. Top #Burundi news @Google search result is the indefensible jailing of schoolgirls. Similarly, #Burundi on @Twitter top results are doodled pics of Nkurunziza from the 4 corners of the globe. Shame on you, guys: #FreeOurGirls! pic.twitter.com/qbXddJW5hG

Stop being petty Nkurunziza. Scribbling has never been a crime. #FreeOurGirls pic.twitter.com/aPrUC85PxZ

Related Topics:#FreeOurGirlsBelyseBurundiElianeMichelinePierre Nkurunziza
Up Next