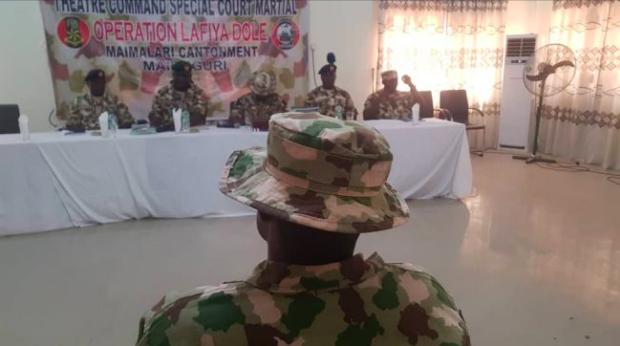 Flt.-Lt. Martins Owerem, of the Nigerian Air Force (NAF) was on Tuesday dismissed  by the Nigerian Military Court Martial sitting in Maiduguri for raping a 14-year old displaced girl.

President of the Court, Maj.-Gen. Yakubu Auta, held that the court found Owerem guilty on the two counts rape and assault.

TheCable reports that the convict, who was said to have committed the crime in 2018 at the Bakassi IDP camp, was charged with defilement; assault and disobedience to standing order.

Prosecution counsel, Capt. Aminu Mairuwa said Owerem, on September 29, 2018, while on patrol duty at Kawon Jiya community in the outskirts of Maiduguri, arrested some girls who were collecting firewood on the pretext that they crossed into the restricted area.

Mairuwa added that he took one of the girls into the bush and raped her.