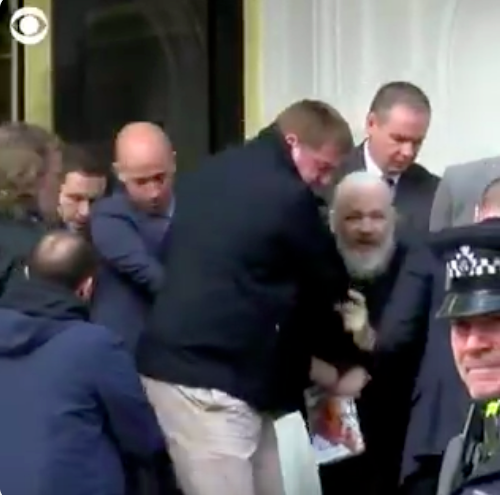 Julian Assange, founder of WikiLeaks, who had been living the Ecuadorian embassy in London has been arrested by UK Police.

CBS reports that he was removed from the embassy after he was evicted by Ecuador.

WATCH: WikiLeaks founder Julian Assange is forcibly removed by London police after being evicted by the Ecuadorian Embassy. He had been living there since 2012. https://t.co/ttlbIlGLYv pic.twitter.com/zptVFP0JRg

The police later said he was also placed under arrest “on behalf” of U.S. law enforcement authorities, who had filed a formal extradition request.

Assange, an Australian, had been living in the embassy since 2012 where he sought refuge days after the UK’s Supreme Court upheld a decision to extradite him to Sweden for questioning over claims of sexual assault which he has repeatedly denied.

Swedish prosecutors dropped their case against Assange but he still continued to live in the embassy because he was still wanted for breaching his bail terms and failing to surrender to the UK court in June 2012.