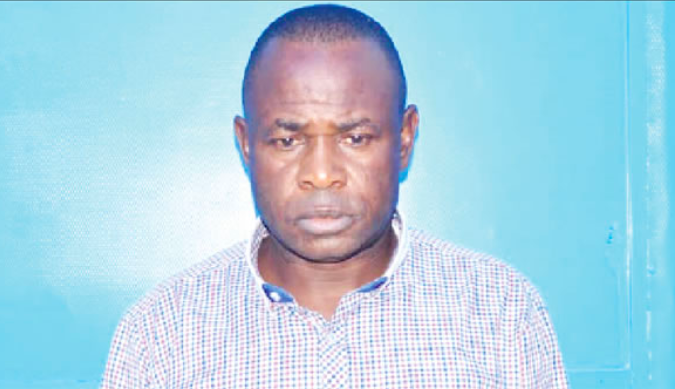 A pastor of Mountain of Fire and Miracle Ministries (MFM) in Abuja, David Onyekachuku has been arrested by operatives of the National Agency for the Prohibition of Trafficking in Persons (NAPTIP) for allegedly raping and impregnating a 16-year-old girl who is said to be an orphan.

The Nation reports that NAPTIP’s Head of Press and Public Relations Unit, Stella Nezan, disclosed the news in a statement.

Operatives of NAPTIP have arrested a 48-year-old pastor with the Mountain of Fire and Miracle Church (MFM), Gwaripa branch, Federal Capital Territory (FCT), Abuja, for alleged rape and sexual exploitation of a 16-year-old orphan and impregnating her in the process.

The suspect, David Onyekachuku, from Nsukka, Southeast of Nigeria, was said to have volunteered to provide shelter and conduct deliverance on the girl after she was accused of witchcraft, but (he) thereafter took advantage of the vulnerability of the innocent girl and devoured her sexually repeatedly.

The victim, a Junior Secondary School (JSS II) pupil of a government school in Abuja, suddenly dropped out of school and was in dire need of accommodation following the death of her parents in 2018.

Investigation revealed that the pastor, who lost his wife few years ago, was then leaving with the woman’s daughter in the same compound with the deceased’s parents in Karmo community in the suburb of Abuja.

He volunteered to harbour her and assist her in her education to make her comfortable.

According to the victim, after the first year of their living together, the pastor started making love advances toward her, an action she constantly resisted.

She narrated that the first time the pastor raped her was in March, this year, during her birthday. She explained that the man had taken her and his daughter out on the birthday celebration to some relaxation centres in Abuja. According to her, in the evening, after the pastor’s daughter had gone to bed, he approached her and pounced on her, ignoring all her pleas for mercy.

It was gathered that the pastor had since continued to rape her at will, resulting in pregnancy. During interrogation, the pastor confessed to have sexually abused the girl only twice and attributing the evil act to the work of the devil.

He stated that he actually took the girl in to conduct deliverance for her and also enrol her in school, having missed school for about two years.

He said that after the deliverance and she had no place to stay, he then took her to live with him and his daughter.

Punch is reporting that MFM has suspended the pastor following the news.

The church, however, said Onyekachukwu is “not an ordained Pastor” and has been arrested by the police, according to Punch.

Related Topics:David OnyekachukuMountain of Fire and Miracle Ministries (MFM)National Agency for the Prohibition of Trafficking in Persons (NAPTIP)Statutory Rape
Up Next