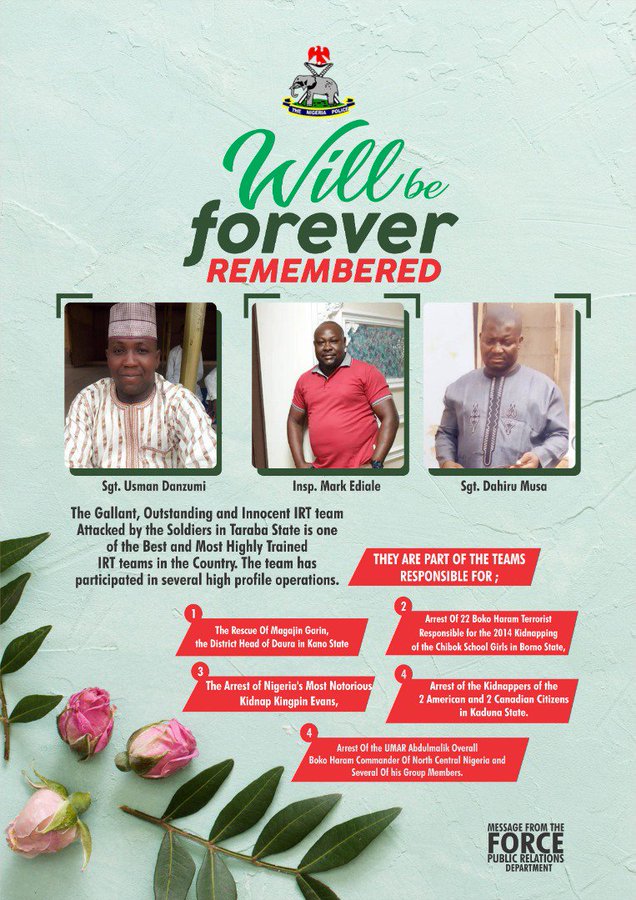 The Police and Army have released statements and counter-statements over the killing of three police officers by soldiers in Taraba.

The Police said the officers were part of the IGP Intelligence Response Team led by ASP Felix Adolije, transporting a suspected notorious kidnapper, Hamisu Bala Wadume to the Command Headquarters in Jalingo when they came under fire from soldiers.

Unfortunately, “three Policemen (comprising one Inspector and two Sergeants) and one civilian died as a result of gunshot injuries sustained in the attack while others sustained serious gunshot wounds,” a statement by spokesperson DCP Frank Mba, said.

Mba continued: “The soldiers thereafter released the handcuffed suspect, Alhaji Hamisu, who is now on the run.”

However, in a statement by its spokesperson, Col. Sagir Musa, the Army said, while responding to a distress call to rescue a kidnapped victim, “troops of 93 Battalion Nigerian Army Takum pursued and exchanged fire with some suspected Kidnappers who indeed turned out to be an Intelligence Response Team from the Police Force Headquarters Abuja on a covert assignment from Abuja.”

It was only after this avoidable outcome that one of the wounded suspects disclosed the fact that they were indeed Policemen dispatched from Nigerian Police, Force Headquarters, Abuja for a covert assignment.

However, following inquiries from a Police Station officer who was asked by the commander of the Army troops whether he was aware of any Nigerian Police team being dispatched to operate in the LGA, the Divisional Police Officer of Ibi Police Division responded that he was not informed about any operation by the Nigerian Police Force Headquarters thus lending credence to the distressed call from members of the community that the suspects who turned out to be Policemen on a covert mission were rather suspected kidnappers.

But the police has raised questions on the whereabouts of Hamisu as well as the source of the distress call it received.

Mba asked the Army for the source of its distress call, and also debunked the report that the police officers did not identify themselves.

“The video on the incident, now viral, wherein the voice of one of the soldiers was heard loudly proclaiming that the Policemen were from the Force Headquarters, Abuja speaks volume,” Mba said.

In the final analysis, we leave the Nigerian Army authorities to provide Nigerians with answers on the following questions emanating from their Press Release:
· Where is the notorious kidnapper, Alhaji Hamisu Bala Wadume ‘rescued’ by the soldiers?
· How and why was Alhaji Hamisu Bala Wadume released by the soldiers?
· How could a kidnap suspect properly restrained with handcuffs by the Police escape from the hands of his military rescuers?
· If Alhaji Hamisu Bala Wadume is a ‘‘victim of kidnap’’ as claimed, and properly rescued by soldiers, why was he not taken to the Army Base for documentation purposes and debriefing in line with the Standard Operating Procedure in the Nigerian Army?
· Why were the Police Operatives shot at close range even after they had identified themselves as Police Officers on legitimate duty as evident in the video now in circulation?