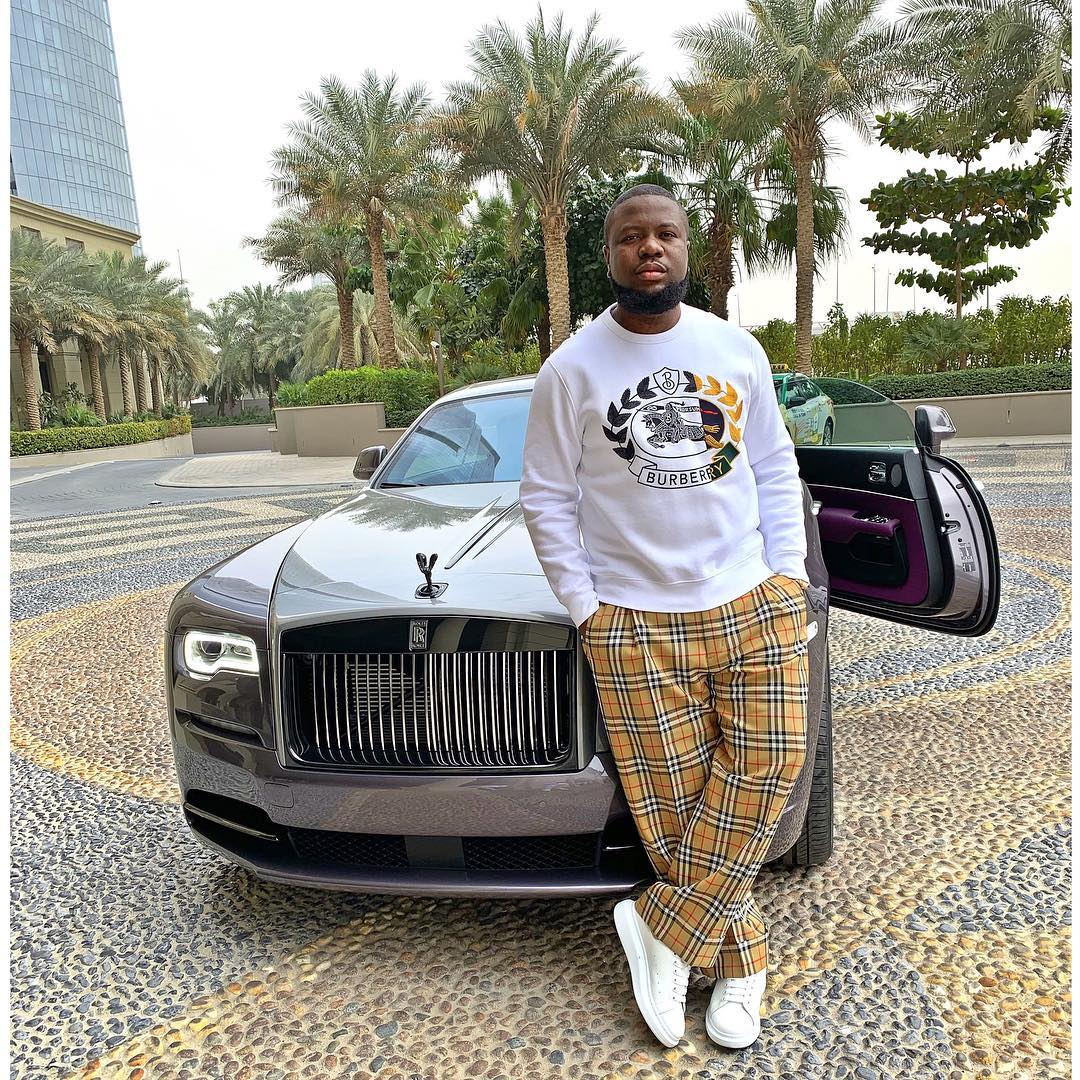 A lot has happened since the confirmation of the arrest of the social media sensation and self-proclaimed real estate developer, Abbas Ramoni Igbalode, popularly known as Hushpuppi.

Following his arrest in Dubai, the Economic and Financial Crimes Commission (EFCC) said Hushpuppi was its “most wanted hacker” and was under investigation in Nigeria.

On June 25, a video published online by Dubai police officers working in “Operation Fox Hunt 2”, stormed Hushpuppi’s home and arrested him, in one of a series of coordinated raids against him and other co-conspirators.

Hushpuppi and his Nigerian right-hand man, Olalekan Jacon Ponle, popularly known as Woodberry, have been extradited to the United States, according to a statement by the Dubai police.

In an announcement on Thursday afternoon, the Director of the Federal Bureau of Investigation (FBI), Christopher Wray praised the “exceptional effort exerted by the United Arab Emirates”, in fighting transnational organized cybercrime including the arrest of Hushpuppi and Woodberry taken down in the operation Fox Hunt 2.

Wray also praised Dubai’s police for their cooperation in extraditing the “unwanted criminals”, who committed money-laundering and multiple cybercrimes to the United States”.

Hushpuppi and Woodberry were arrested along with ten other African suspects in the special operation.

A recent update states that there’s a possibility he’ll be spending 20 years of his life in a US prison if found guilty of the fraud allegations levelled against him.

According to the Department of Justice of the United States, the charges levelled against Hushpuppi range from laundering hundreds of millions of dollars from business email compromise (BEC) frauds and other scams, including schemes targeting a U.S. law firm, a foreign bank and an English Premier League soccer club.

Part of the statement reads:

Nigerian National Brought to U.S. to Face Charges of Conspiring to Launder Hundreds of Millions of Dollars from Cybercrime Schemes

LOS ANGELES – A Dubai resident who flaunted his extravagant lifestyle on social media has arrived in the United States to face criminal charges alleging he conspired to launder hundreds of millions of dollars from business email compromise (BEC) frauds and other scams, including schemes targeting a U.S. law firm, a foreign bank and an English Premier League soccer club.

Ramon Olorunwa Abbas, 37, a.k.a. “Ray Hushpuppi” and “Hush,” a Nigerian national, arrived in Chicago Thursday evening after being expelled from the United Arab Emirates (UAE). Abbas made his initial U.S. court appearance this morning in Chicago, and he is expected to be transferred to Los Angeles in the coming weeks.

Abbas was arrested last month by UAE law enforcement officials. FBI special agents earlier this week obtained custody of Abbas and brought him to the United States to face a charge of conspiring to engage in money laundering that is alleged in a criminal complaint filed on June 25 by federal prosecutors in Los Angeles.

According to an affidavit filed with the complaint, Abbas maintains social media accounts that frequently showed him in designer clothes, wearing expensive watches, and posing in or with luxury cars and charter jets. “The FBI’s investigation has revealed that Abbas finances this opulent lifestyle through crime, and that he is one of the leaders of a transnational network that facilitates computer intrusions, fraudulent schemes (including BEC schemes), and money laundering, targeting victims around the world in schemes designed to steal hundreds of millions of dollars,” according to the affidavit.

The All Progressives Congress (APC) has called on the EFCC, Nigerian Financial Intelligence Unit (NFIU), and sister agencies to investigate money-laundering reports, allegedly, linking some members of the Peoples Democratic Party (PDP) to Hushpuppi.

The Deputy National Publicity Secretary of APC, Yekini Nabena, in a statement issued on Saturday, said Hushpuppi’s case should be a matter of serious worry to relevant authorities in Nigeria. Nabena recalled that the PDP leadership had turned Dubai into a “strategic” meeting place ahead of the 2019 general election, adding that Hushpuppi’s affinity with the PDP leadership is not a mere coincidence.

*Criminal Conspiracy Linking “Hushpuppi” With PDP Leadership Should Be Investigated*

Reports of the criminal conspiracy linking the top echelon of the opposition Peoples Democratic Party (PDP) with Ramon Olorunwa Abbas, also known as ‘Ray Hushpuppi’, who was recently arrested along with associate(s) in Dubai, United Arab Emirates, and extradited to the United States of America to face trial over cyber-enabled fraud and Business Email Compromise (BEC) schemes should be a matter of serious interest to relevant authorities in Nigeria.

We note that the Economic and Financial Crimes Commission (EFCC) has already declared the arraigned Instagram celebrity wanted over fraud allegations. However, the EFCC, Nigerian Financial Intelligence Unit (NFIU), and other sister agencies must investigate money laundering reports linking some PDP leaders and financiers to the Dubai-based international criminal ring.

We call on relevant authorities to up their guard to prevent these practices that threaten the sanctity of our elections. The people’s will and votes should determine elections, not illicit money used to buy votes. 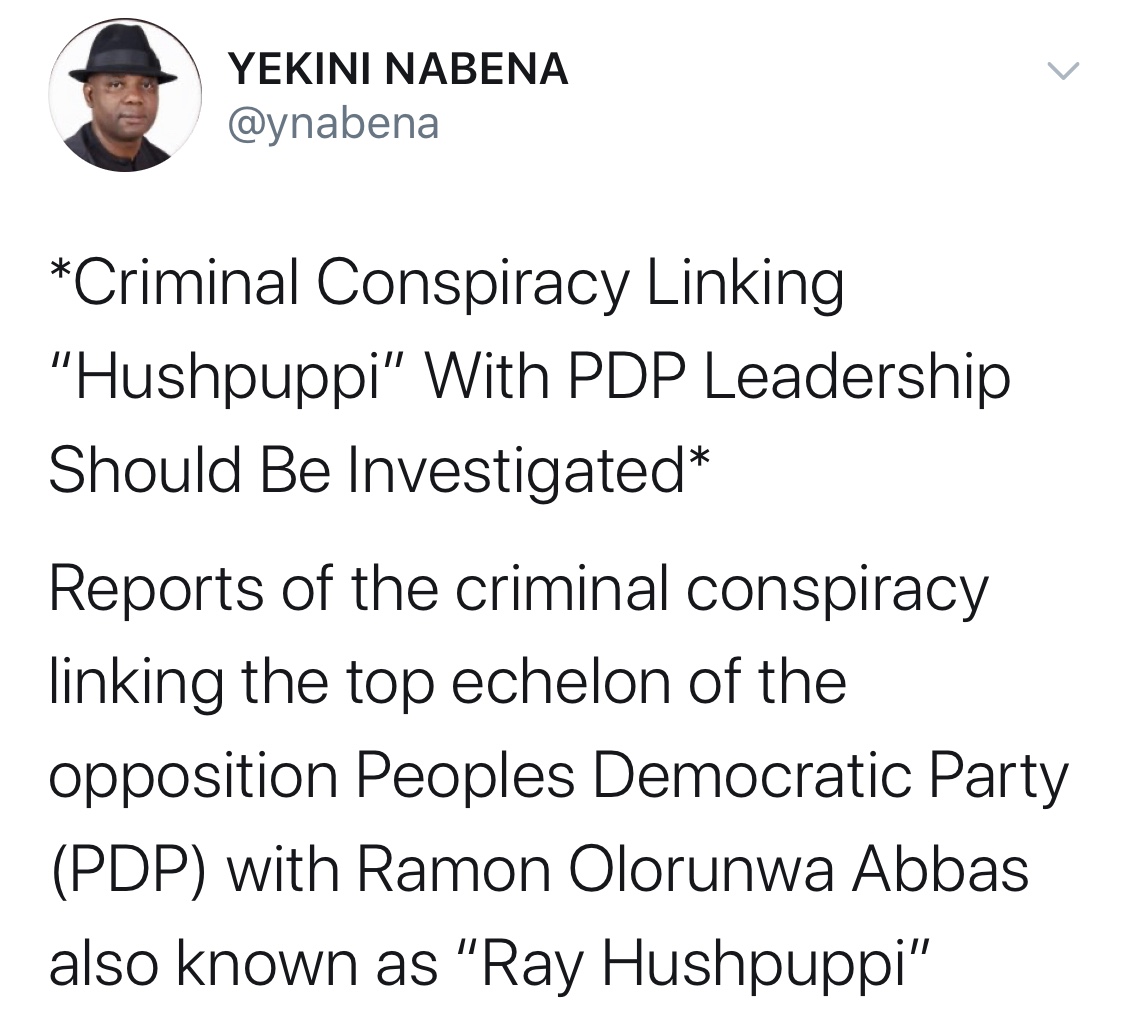 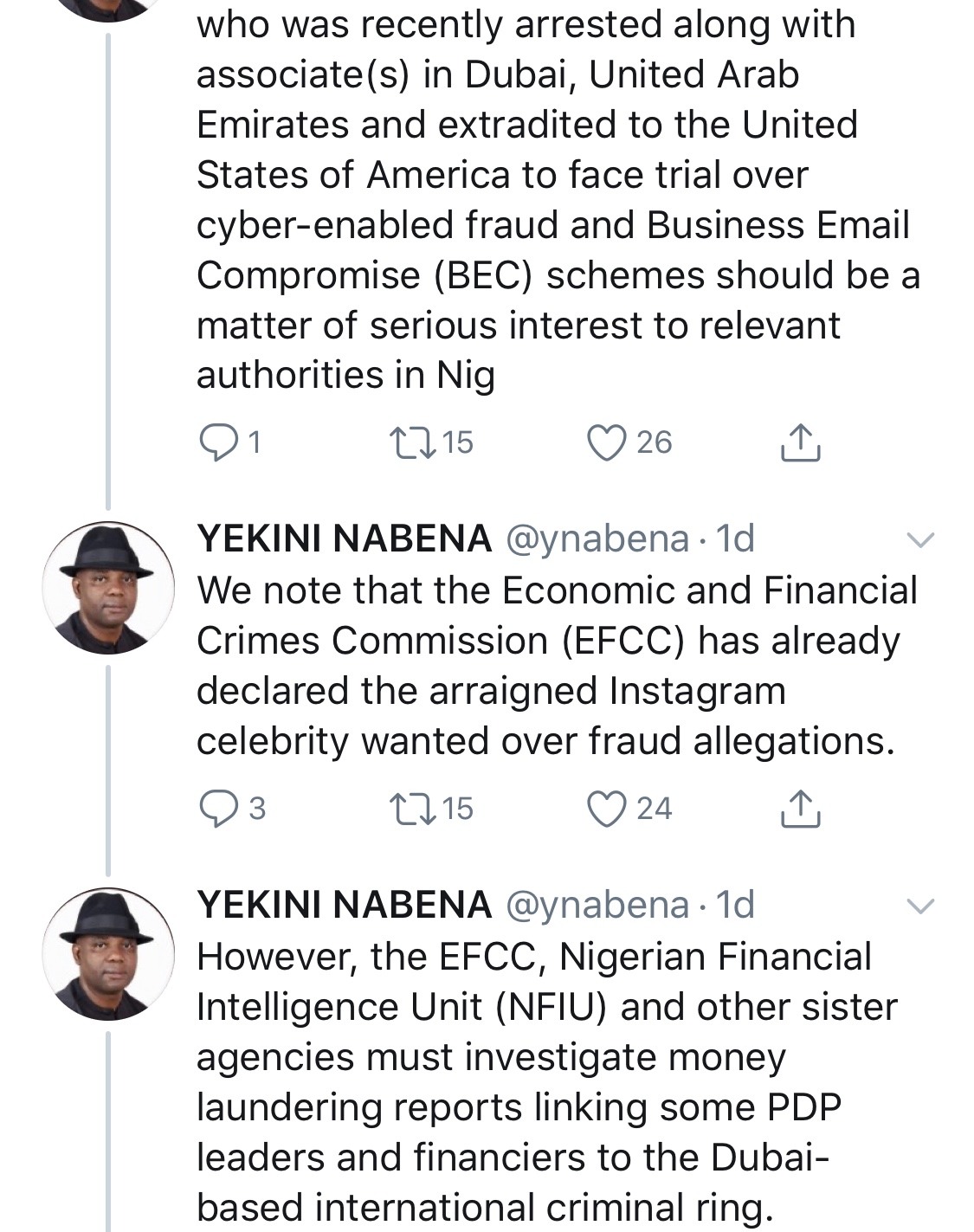 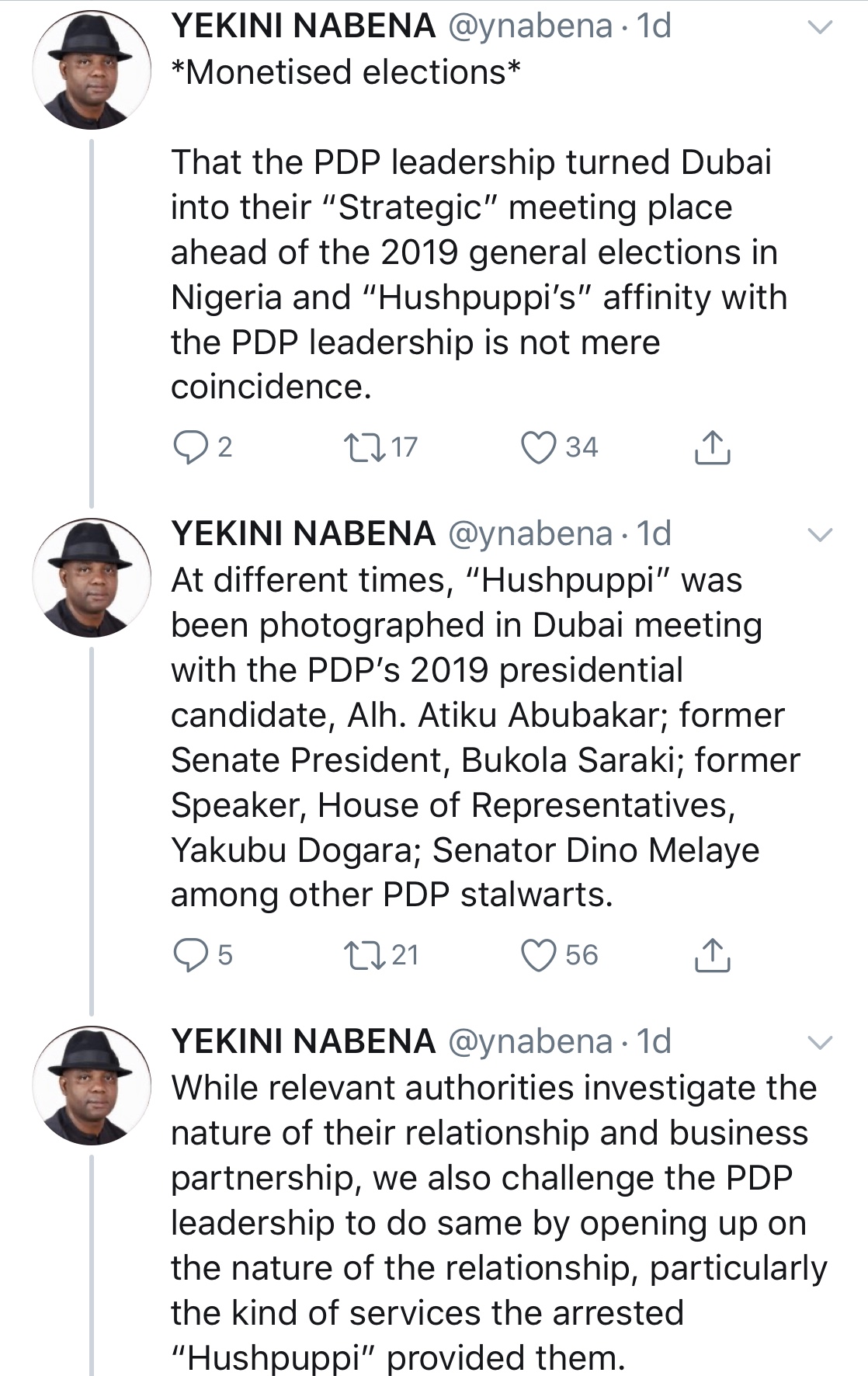 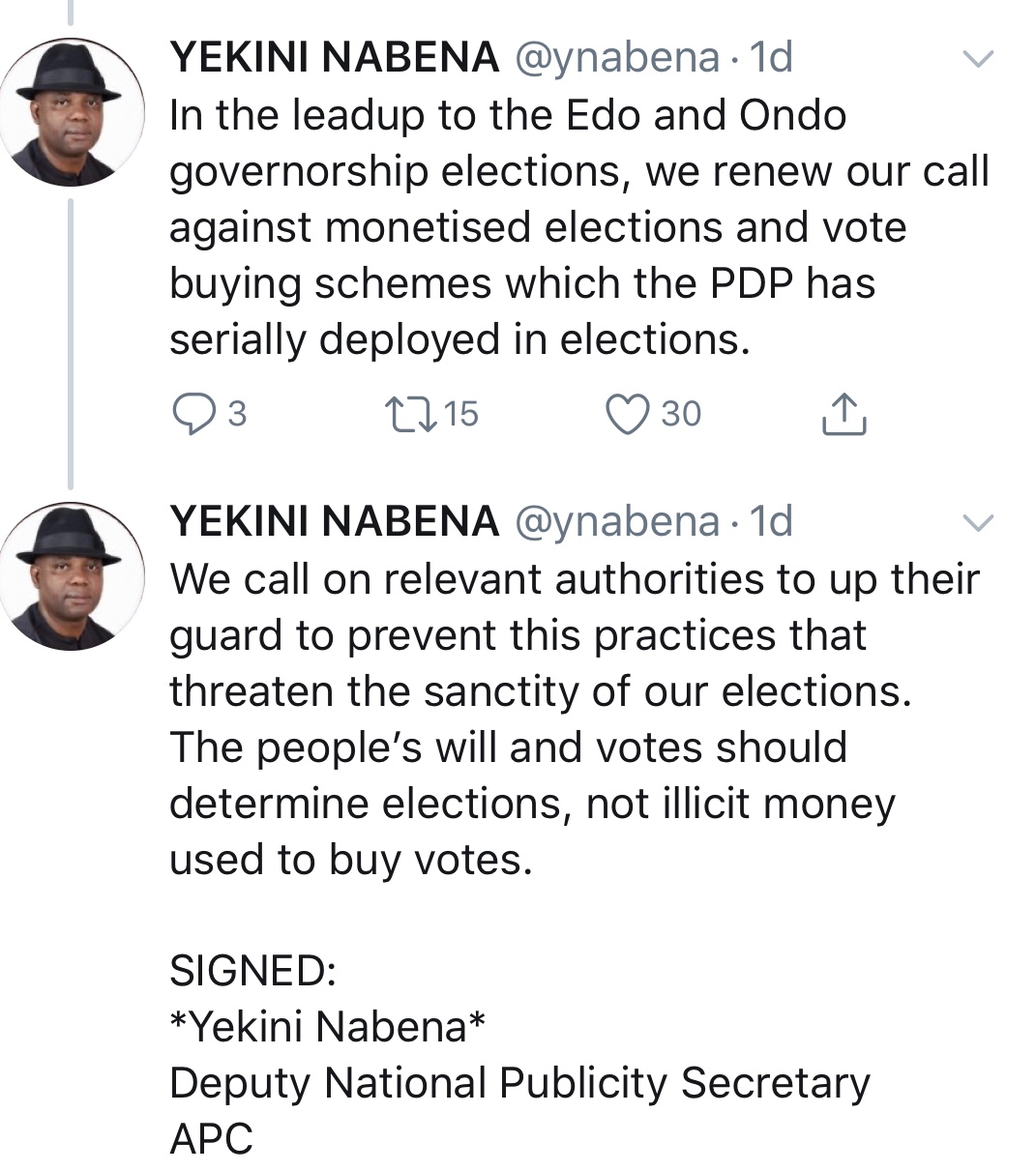 Former Vice President, Atiku Abubakar, has denied having any links with Hushpuppi.

This is coming after APC released a statement in which it urged the EFCC and other security agencies to investigate the links between Hushpuppi and some PDP members. The party, in its statement, said Hushpuppi has been photographed with Atiku and some others like Bukola Saraki, Dino Melaye, and Yakubu Dogara.

Responding to the statement by APC, Paul Ibe, the media aide to the former VP, said the photo of Atiku and Hushpuppi making the rounds was a mere photo-op and not at any meeting as is being speculated.

Read the statement from Ibe below

‘It is curious that the All Progressives Congress is mischievously trying to link Atiku Abubakar to the alleged fraudster, Ramon Abbas, AKA Hushpuppi, simply because he was photographed with Atiku at an event where many Nigerians had gathered.

For the avoidance of doubt, it was a mere photo-op and not at any meeting as being ingloriously speculated. We would advise the APC and Mr. Nabena to be very mindful of such senseless statements in the future especially as the case under reference is a subject of litigation in another country.

Had they been more sensitive, they would have come to terms with the reality that the case is a national embarrassment – not something to cheer about for any political blackmail.

It is curious that the All Progressives Congress is mischievously trying to link Atiku Abubakar to the alleged fraudster, Ramon Abbas, AKA Hushpuppi, simply because he was photographed with Atiku at an event where many Nigerians had gathered.

Had they been more sensitive, they would have come to terms with the reality that the case is a national embarrassment – not something to cheer about for any political blackmail.

Bukola Saraki, on the other hand, in a statement released by his media aide, Yusuph Olaniyonu, described the allegations by APC as irresponsible and cheap politics, in which it tried to link him with Hushpuppi.

The former President of the Senate said he has no form of association with Hushpuppi and neither does he know him in any way.

The statement credited to the APC, the ruling party in our country, is one of the ways by which our anti-graft agencies are weakened and why the fight against corruption in the country is often viewed with suspicion by the international community. This is because when these cyber-crime suspects were operating freely and openly displaying wealth, the APC saw nothing bad in their activities. Also, the party at that time did not deem it necessary to call on the anti-graft agencies to investigate their activities.

Also, since the arrest of those cyber crime suspects and the subsequent damage to the image and the economy of Nigeria as well as the crisis it created for Nigerians engaged in lawful businesses across the world, the ruling party had been muted. The only time the APC deemed it necessary to make a statement was when it thought it should play dirty, cheap and irresponsible politics.

Dr. Saraki was the only political leader who has publicly made a statement through an Op-Ed article published in the Daily Trust newspaper of July 1, 2020 titled “Cyber Criminals: Confronting The Few Who Dent Many” and this opinion article had been widely circulated online and on other platforms. In that article, he strongly condemned the activities of these cyber criminals and called on the law enforcement agencies and other stakeholders to make decisive interventions to checkmate their activities. He has also got a research institution, the Politeia Institute, whose board he chairs to commence a research on the best ways to tackle the menace.

Such a noble intervention in tackling a menace is what Dr. Saraki believes in, not mudslinging and playing politics at the expense of the nation’s image. At this point, we call on the APC leadership to rein in the so-called Yekini Nabena and compel him to desist from making and circulating such malicious, odious and offensive claims”, the statement concluded. 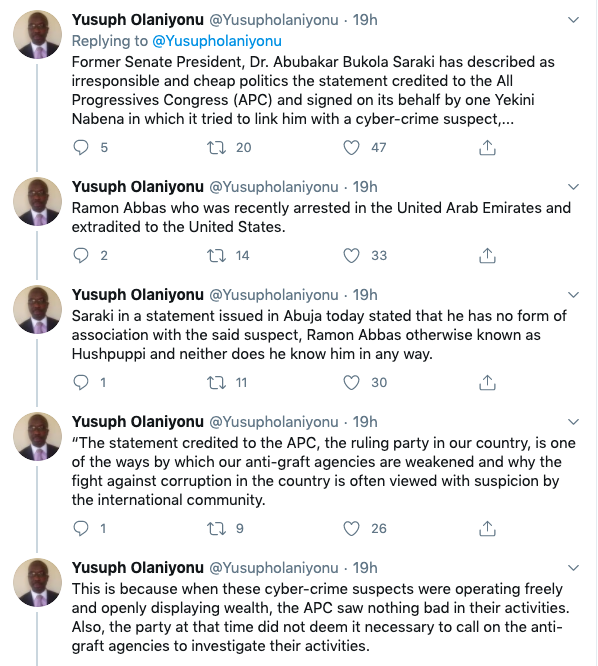 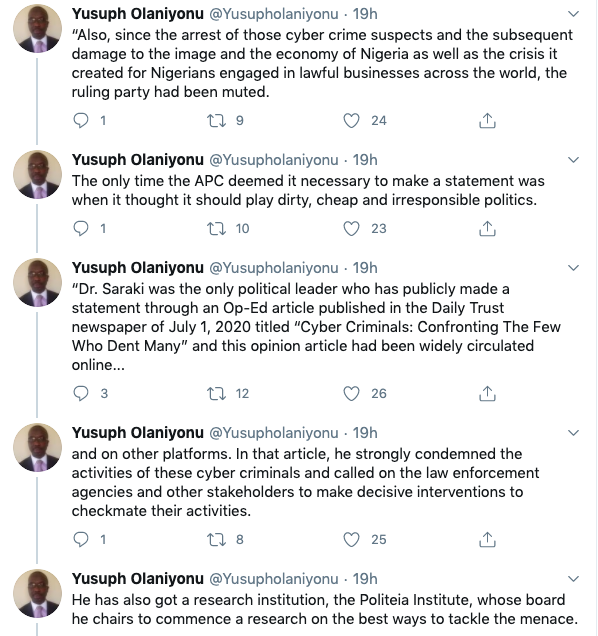 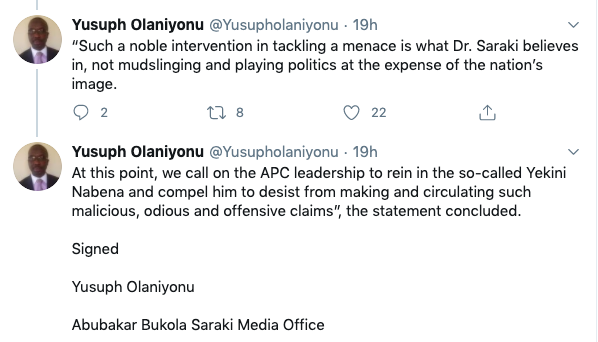