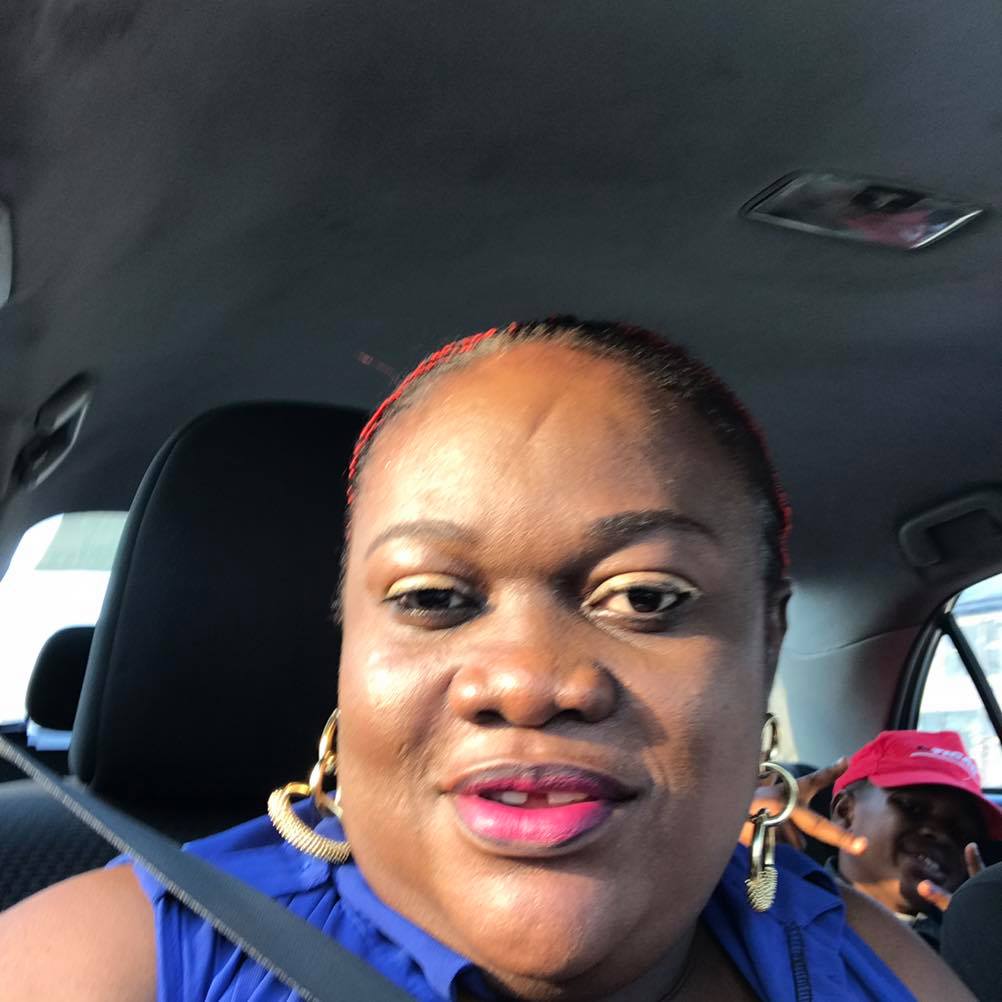 On December 20, in a video that went viral on social media, Deborah Okezie, the mother of an 11-year-old JSS1 student of Deeper Life High School, Uyo, Don Davis, narrated how her son was allegedly starved, sexually molested and assaulted in the school.

In the video, Deborah can be found questioning her son who, although seemed very frightened, said that he was being starved and beaten by one “Mr. Akpan” while he was in school. He was also allegedly molested and assaulted by some senior students of the school. “They will remove his boxer and push their legs and hands into his anus. Look at a child I sent to school, he returned as a skeleton and came back with a broken anus within two months,” she said. Deborah also mentioned that her son was threatened not to talk, else he “would be a dead man.”

Since the video went viral, it has garnered a lot of reactions from Nigerians, including the governor of Akwa-Ibom State, Udom Emmanuel and his wife who, according to Deborah, came to visit her and set up an investigative panel to look into the matter.

Is this a Democracy?

In another video she released, Deborah mentioned that she was being threatened by the Commissioner of Education in Akwa-Ibom State, Enobong UdemeAbasi Mbobo. According to her, the commissioner had invited her for a meeting, citing that parents of the accused students and the Deeper Life School Board were around.

But on getting there, Deborah said the commissioner asked her to take down her videos, claiming that the videos are painting her office in a bad light. It didn’t end there, one of the parents threatened to slap her and another brought out his belt to flog her. Deborah said she had to lie that she was wearing a camera and their actions were being recorded before she could escape them.

There’s a different way this can be handled by the Commissioner of Education: allow Governor Udom’s investigative panel to do their job and present their findings to you; ensure the Deeper Life High School is open for more investigations, just in case there are other students like Don Davis who have been bullied into silence; assure the victim and his parents that everything within your power will be done to ensure that they get justice and the culprits are brought to book – this way, they will rest assured that they are safe in their own country.

In handling cases like this, Nigerians in leadership positions have to realise that, in this age of social media, you can hardly bully people into silence. In threatening the victim, you have given culprits the power and grace to walk away unscathed. You have told those kids that it is alright to bully and sexually assault junior students. You have told Akpan that it is okay to starve students and you have told Deeper Life High School that they are untouchable. In short, you have given violence an environment to thrive. You will also force the victim to fight back and eventually escalate the whole issue. It will be sad if the commissioner has chosen the path of intimidation in a situation where she can show that the state will always stand by the truth and be for the victims.

A Life Deeper than One’s Reputation

After the death of Ravi Zacharias, several reports of his sexual misconduct, over the course of many years, rose to the surface and some of his victims came out to talk about how Ravi sexually assaulted them. In reading about it, what struck me the most was how the Ravi Zacharias International Ministries (RZIM) handled the case. Just like Don Davis’s case, Ravi’s sexual misconducts are still being investigated but the church had to put out a statement. “We know this news will send all of us, and thousands of others, into grief, confusion, disillusionment, and anger. We know that you will have many questions, as we all do as well. We grieve profoundly with those who have suffered from Ravi’s sexual misconduct,” wrote Sarah Davis, RZIM’s CEO and Zacharias’s daughter. She also asked staff and supporters to pray for them.

Sarah put the plight of the victim(s) before the reputation of the church. This, I expected from the Deeper Life Bible Church. However, I was disappointed when the church released a statement and, in the second paragraph, made the whole situation about them and not the victim. 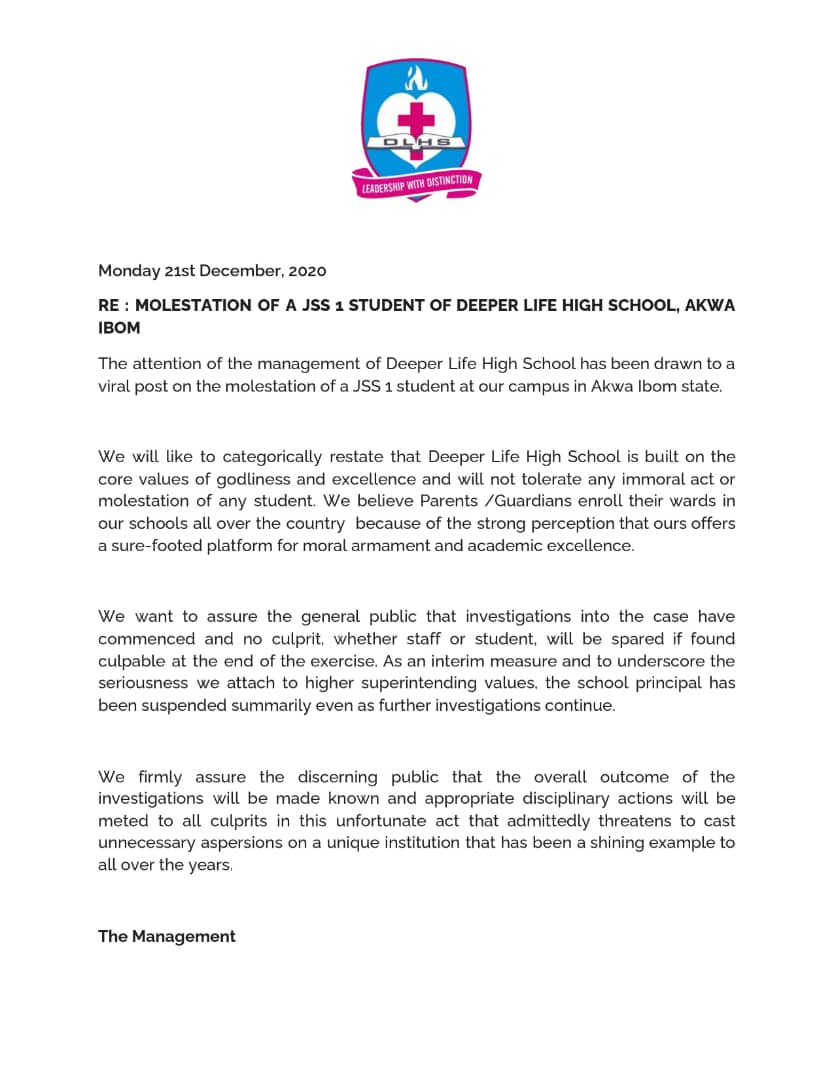 While Deeper Life Church was putting up a statement on social media, some of its board members were allegedly begging Deborah in the hospital. Deborah also claimed that on Monday, 21st of December, the same day Deeper Life announced their investigation, the church’s representatives were on air claiming that she wasn’t Don Davis’s mum and the boy had, in fact, come to school very sick and bedridden. A claim Deborah has since refuted.

This woman has gone through a lot just to get justice for her traumatized son.

But this is Nigeria where we see power play just to sleep this heinous crime under the carpet #JusticeForDonDavis pic.twitter.com/HIqkLrkZHH

Thankfully, this was, to a large extent, rectified when Thelma Malaka, the Education Secretary of Deeper Life High School made a video reiterating that the church will be transparent and justice will be served. 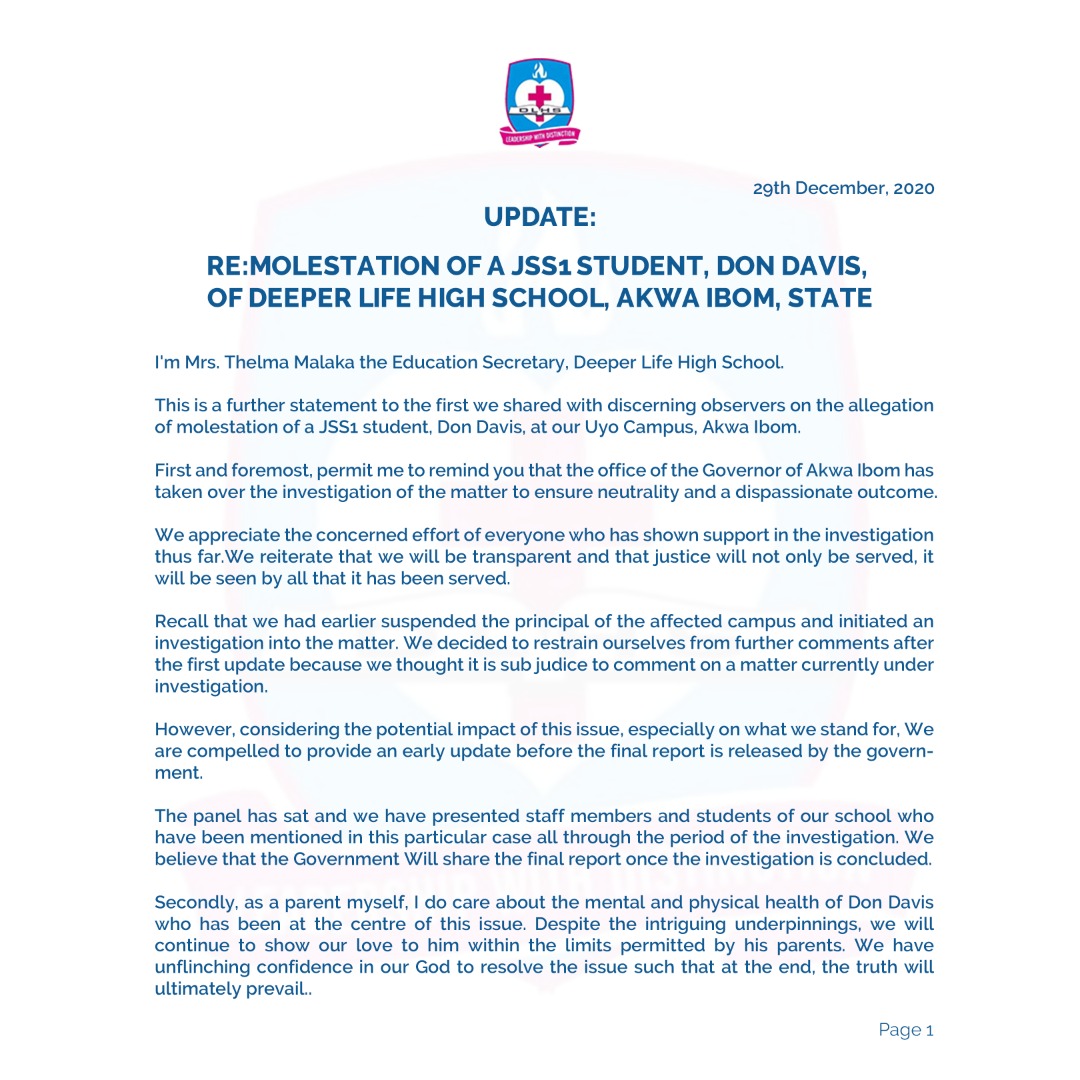 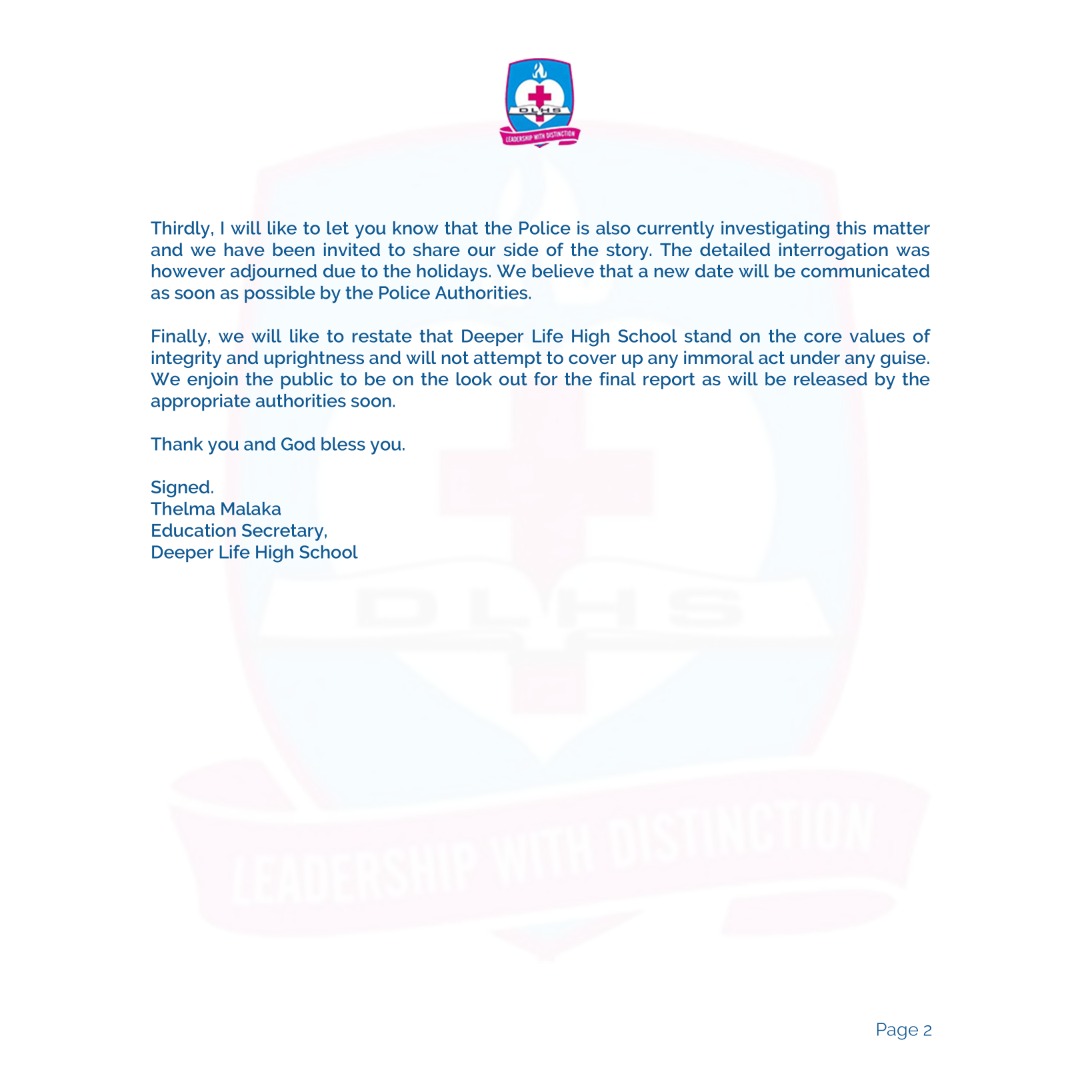 It’s really simple: the prosecution of the teachers/staff members who were complicit in allegedly starving and harassing him; prosecution of the students who allegedly sexually assaulted him; action against the school for alleged negligence; interviewing other students and parents to see if there are other students wearing the shoes of Don Davis but are too scared to speak up; proper monitoring of the Deeper Life High School to ensure issues like this do not resurface in future; a plan/bill/framework designed to end bullying and all forms of harassment in all secondary schools across the nation.

Doing this will not only place the Ministry of Education in better light, but it will also ensure that we raise students who are mentally and psychologically sound. A lot of Nigerian kids have been bullied so much and they have grown to become timid adults who cannot speak up or fight for themselves. We can end that cycle now.

Peter Molokwu: The Thing About Imposter Syndrome & What it Does to Us

Lola Odele: We Are Going to be Alright