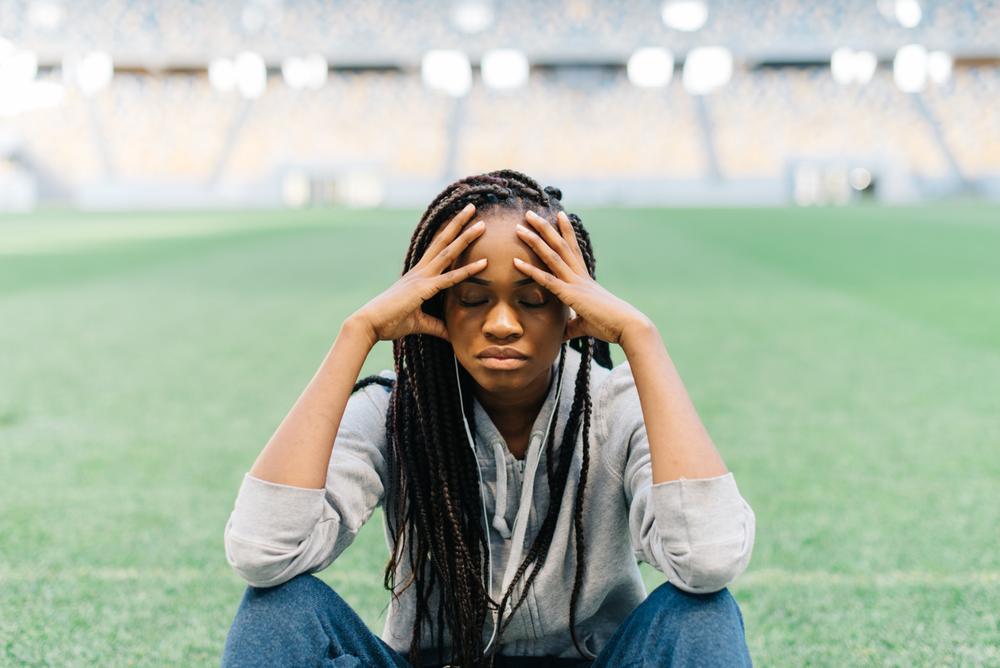 An average Nigerian woman grows up in a society that places her importance or relevance on her close proximity to men. From her father, brothers, boyfriend, uncles, husbands, and so on, the men a woman associates with determines, to an extent, how much respect she is given.

We see it play out every day:

When a woman walks alone, she can be easily catcalled and harassed by men. But when she walks with a man – no matter who he is to her, other men know to respect themselves and not harass her. When a single mother or a single lady wants to rent an apartment, many landlords are usually reluctant. Some will outrightly state that they cannot give their apartment out to single ladies. Most landlords want to “see your man”, to know that you have someone. To them, having a man is a sign that a woman is responsible.

There’s an apparent need for women to be answerable to someone, an authoritative figure – in this case, a man. That is why society believes that a woman ought to live in her father’s house and from there, move to her husband’s house. A woman having an apartment of her own, away from her father/family, is seen as rebellious, a signal that such woman is preparing to be a promiscuous person, and an indication that she will not be submissive in her husband’s house because she has tasted ‘independence’. It is also the same reason a lot of people don’t ‘rate’ single mothers or divorced women. To them, these women “have no crown over their heads”.

It doesn’t end there. Your father or husband’s prominence or wealth has a lot to do with how you will be viewed. If your father or husband is prominent, your success is attached to him. “If not because of her father, will she get that appointment?” To many, it doesn’t matter that you are smart, or you have worked so hard to attain that position. It must have taken the connection of a man for you to reach the peak of your career.

When Busola Dakolo opened up on her alleged rape case with Biodun Fatoyinbo of COZA, many people believed and rallied around her. That’s because her husband is a prominent person and a respected figure in Nigeria. Would people have fought so hard for her if she was a random woman who wasn’t married to a celebrity?

The Nigerian society has conditioned people to believe that women must take certain actions in accordance with men’s acceptance. The society expects women to ‘have a man’ or be already married at a certain age and stage. Failure to do this invites ridicule and disrespect. That is why no matter what a woman achieves in her career or business, she will always be seen as ‘incomplete’ and, at worst, seen as irresponsible.

But in today’s world – the 21st century, year 2020 – many young Nigerian women are rejecting the societal belief that their worth is tied to a man – be it their father, male relatives, or romantic partner.

What it means to be a woman in the world

The Nigerian Immigration Act requires that married women applying for International passports are required to submit the written consent of their husbands. In many police stations, women are not allowed to post bail for someone or stand as sureties to detainees until a man arrives. Although the Nigerian constitution does not prohibit a woman from doing so, women in Nigeria are still not allowed to bail a detainee.

In Saudi Arabia, women are mandated to have a male guardian. This guardian could be her father, brother, husband, or even her son. The male guardian is responsible for making critical decisions for the women. Without a male guardian’s approval, women cannot apply for a passport, travel outside the country, get married, study abroad, or do other things that will generally improve their life and status.

In Yemen, Egypt, and 14 other countries, women can’t leave the house without their husbands’ permission, except in emergency situations – like the death of a relative.

Just like these countries, the worth of a woman is measured by her proximity to a man – all over the world.

To fight a society that is bent on keeping women ‘in their place’ – below men, we must start by having a conversation on how a woman’s life should not revolve around a man and why her worth should not be tied to the man she is with – whether in the family or in romantic relationships. There’s absolutely no reason why a woman should have a male guardian if she is old enough to make decisions on her own.

This conversation starts with our homes and families. From not telling your female children to sweep very well so she can be a good wife or telling her not to do certain things because her future husband might not like it. In raising female children, we must teach them to pursue their dreams and break away from the shadow of the men in their lives.

We must ensure that we do not teach them to embrace being second-fiddle to men and it starts with the little discussions we have at the dining table. It starts with encouraging the girl-child to read her books, learn how to cook, learn a skill, and aim for the best – not because she wants to be a wife-material 1000 yards, but so that she can add value to herself and live a fulfilling life. It starts by encouraging her to speak up and amplifying her voice.

The relegation of women also manifests in the conversations we have with our friends. With you encouraging your female friend not to take that juicy job, buy a car or build that mansion so she won’t chase men away. With you telling them not to pierce their nose or get that tattoo because “you will not get a man to marry you”.

One of the biggest conversations we can ever have, concerning women emancipation in Nigeria, will happen when influential and prominent women come together to discuss issues affecting women – without this discussion being centered around men. 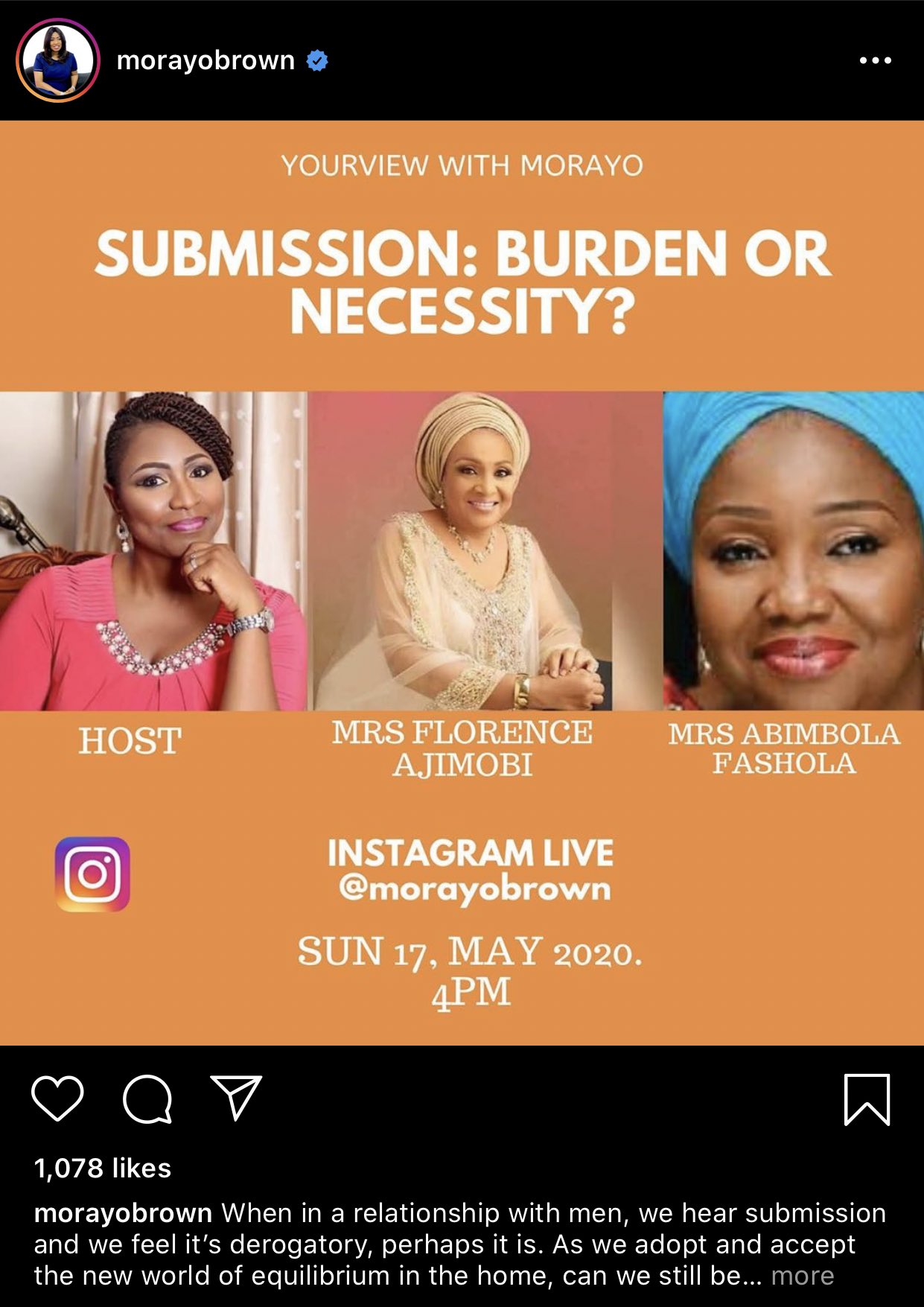 For many Nigerian prominent women, submission and marriage is one hill they are willing to spend the rest of their lives on. A lot of older, influential and prominent Nigerian women – especially those in politics and governance, and business tycoons – have failed the younger generation. With all the things happening to women in the country – rape, sexual assault, gender pay gap, child marriage, domestic abuse, gender-based violence, Female Genital Mutilation – when Nigerian prominent women come together to have a conversation, it is usually centered around men, marriage, submission.

Former First Lady of the United States of America, Michelle Obama, is one woman who has influenced young women (and people, generally) all over the world. She uses her platform to encourage women to be bold and confident, grow in their career, join politics, and be part of governance, stand up for their rights and pursue their dreams. But here, in Nigeria, our First Ladies talk endlessly about marriage and why women need to submit to their husbands.

Young women are changing certain narratives and taking control of certain conversations and it is important that influential and prominent women join this movement. It is embarrassing that those at the top – who are meant to be a source of inspiration for younger generations – are still stuck in the 17th century’s ideologies. That is why the President of Nigeria can come on air to say that the First Lady belongs to the kitchen and the other room and up until today, she never countered it. How do you inspire younger women when you have been relegated on national television?

Let’s move forward, shall we?

To be honest, it is difficult to let go of certain social conditioning, that is why we need to crawl and walk before we run. It starts with the little actions you take. If, as a parent, you feel the need to police your daughter way more than you do your son, you are, to an extent, taking her freedom away from her. If you find yourself telling your girl-child to do something so she can be a good wife, or pressurizing your married daughter to take permission from her husband before she does every single thing, you need to check yourself. If, as a friend, you find yourself advising your friend not to do something so won’t chase men away, you need to check yourself. If, as a woman, you find yourself constantly doing things, not for yourself but for the validation of a man, you also need to check yourself.

Before we can effect any change, we have to be self-aware and enlightened. This starts with the kind of conversations we have as women or let into our space.