BN at 6 - Our Stories, Our Miracles: From Good To Bad & Back To Great! Wole Talabi Shares His Incredible Story

Ufuoma Uvomata: How Best Do You Handle Social Anxiety?
As part of our 6th anniversary celebration, and in line with the BellaNaija ethos of entertainment, information and positively impacting lives, we are sharing 6 stories of real people who have been dealt with some of life’s unexpected cards. In spite of these challenges, these people have found the strength to pull themselves up and trudge on and are willing to encourage others going through their own issues. Life is a roller coaster with its ups and downs and twists and turns. For Wole Talabi, a gifted child, the sudden upheaval that came with the loss of his parents was very difficult. We sincerely hope that you are inspired by his story. 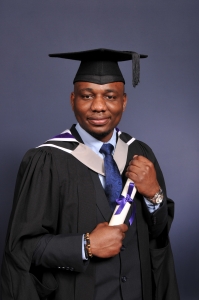 ***
I find it very difficult to describe myself… some people have described me as a bit of a wandering spirit. Some describe me as a nerd. I have even been described as an old soul. The one thing I can say for certain is that I enjoy solving problems. I was born in Warri, in a steel town hospital which might explain why I’m an engineer (twice over – a chemical/process engineer and a petroleum/reservoir engineer). Both of my parents are from Ijebu and I’m a bit of an amateur short-story writer – I mostly write at www.thenakedconvos.com where I also serve as an assistant editor . I love cakes, music and cocktails.
Growing Up
I spent the early years of my life in Warri. I had a pretty interesting childhood (at least by my own reckoning). Days spent plucking fruits from trees, saving up money to buy kool aid and ice cream; talking about Rambo and Robocop and doing  the entire assortment of random things children generally do. I have always had this fascination with information and knowledge. For as long as I can remember, I have always wanted to know how things work – I had finished reading my father’s collection of encyclopedias by the time I was 8 even though I didn’t understand half of what I had read anyway. (I have also forgotten quite a lot of it – I have a notoriously bad memory). I also wrote essays and stories quite a bit. I won a prize for one of my essays back then. The only thing I remember about that entire event was that my mother was extremely pleased (she had also won quite a few awards for her own essays back in her youth and she eventually obtained a degree in English. I think she thought whatever measure of talent I had, came from her – she was right)
Academic Life
I’ve been on scholarships for most of my life. When I was 9, I won a scholarship to attend the Igbinedion Education Centre in Benin for my secondary education and so I did. By some universal conspiracy, my parents moved to Benin as well and I concluded my teen years and secondary education there before moving to Lagos. I eventually gained admission into Obafemi Awolowo University in Ife to complete my degree in chemical engineering. My dad had studied the exact same course 30 years earlier in the same University so this was a really exciting thing for me.

Prize Winning At Imperial
My department had an interesting policy where they do not release any results until the entire course is concluded. This implied that beyond an email informing me that I had passed my exams in January and May, I had no idea how good or bad my results were up to the very end. Then one day, I was out for a movie and drinks with friends when I got an email from my project supervisor telling me that not only was I one of only three students to be awarded a distinction but that I had also won the coveted London Petrophysical Society Prize for the work I did and presented as my MSc thesis. I was completely blown away. I actually fell to my knees with surprise and appreciation. It’s one of those moments I will probably never really forget. Six months later, at the graduation ceremony, when I was called out to applause from the entire Royal Albert Hall, I was thinking of a great many things, it was another special moment. I was glad my brothers were there to witness it; I only wish my parents had been there to see it too.
Who I Am Today
I often joke that if you took exactly half of my mother and half of my father and put the two halves together, you would get me. My parents largely influenced who I am today. The experiences, good and bad, define me fundamentally.  The experience has made me a  bit different emotionally as I realize just how ephemeral life can be and so I enjoy it as much as I can. I live and learn harder than I ever used to. I have every intention of living to honor the memory of both my parents. I’m working on living for both of them and myself. Doing what they would have wanted for themselves and for me too. I’m working on being both an engineer and a writer. I have a patent in both mine and my fathers’ names (it was the last major invention he worked on before he died and is a legacy I share with him). I also wrote a science fiction short story which has been accepted for publishing in an anthology by a small publishing house based in South Africa. Right now, I live and work in Abingdon, Oxfordshire at a Technology center where I get to help develop and play around with state-of-the-art Petroleum engineering software applications.  I intend to keep writing short science fiction stories so that one day I can collect them in one book and dedicate it to my mother.
Final Words
Things like this hurt profoundly. You want to cry, scream, curse, wallow in your sorrow and just crawl into a corner. You can do that. When life deals you harsh cards, then you have earned the right to do that. But when you’re done, the world will still be waiting. There will still be things you need to do. Responsibilities to be taken up. Legacies to be carried on. You will still have a life to live. And so I tried to get on with the process of living as soon as possible. All I can say is, “we are what we experience”. Whatever happens, good or bad, take it, absorb it and make the most of it. Channel it and use it as a driving force to achieve whatever you have already set out to achieve. Experiences are more powerful than any simpler inspirations.
Related Topics:AtokeBN At 6BN Our Stories Our MiraclesInspired!Wole Talabi
Up Next

BN at 6 – Our Stories, Our Miracles: Nike Oyetunde Lost Her Limb But Not Her Shine! Overcoming Sarcoma & Amputation, She’s Living Her Life Like It’s Golden

On Becoming a Man: Let’s Talk about the Rainbow!