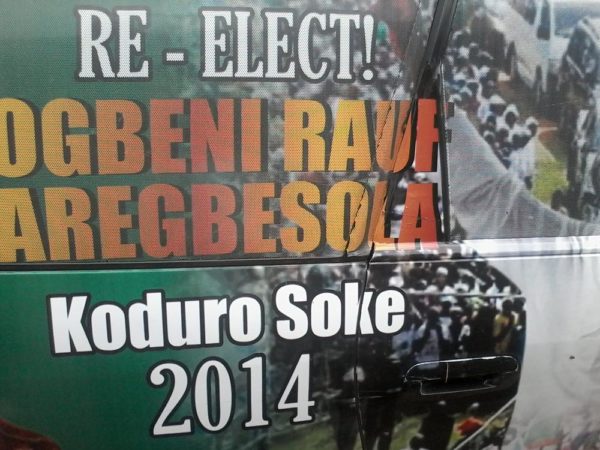 This question races through my mind every time I listen to a Nigerian song. More than often, you find traces or foot prints of an existing song in another song, a promo, commercial jingle or even in a nollywood  movie and the first thing that goes through my brain is if the rights of my clients has been breached and of course if there is any money to be made from it. This topic is really contentious so I would thread carefully. Unfortunately there is a dearth of cases on this subject matter.

This issue is not just peculiar to Nigeria; a lot of other countries have had to deal with situations of this nature. In Nigeria, there are tons of examples where phrases from songs have been used in another work or where there have been used for one form of endorsement or the other. A major example would be the use of Olamide’s KODURO SOKE as a campaign slogan by two prominent APC governors; Governor Fayemi of Ekiti state and Governor Rauf Aregbesola of Osun state.

Various questions come to mind in a bid to decide whether there has been an infringement. Do phrases qualify for Copyright protection? Two basic criteria’s for protection under copyright are creativity and fixation. So can it be said that where there is a measure of creativity in constructing two words and it has been fixed into a CD or a manuscript, it is eligible for protection under copyright? Can Olamide’s “KODUROSOKE”, Phyno’s “ALOBAM”, Wizzy’s “YAGA” or Sakordie’s “YOU KNOW WHAT TIME IT IS, YOU KNOW SAY MONEY NO BE PROBLEM” or Don Jazzy’s “Dorobucci” or Tiwa Savage’s “Eminado” pass as creative?  Would a fixation in a CD protect it under copyright? Or would it just be referred to as an idea which cannot be protected under copyright. This article will, in summary answer some of these questions and as well review a possible defense to such claim.

Generally, there is said to be no protection for phrases under copyright because phrases are generally regarded as ideas. The American Copyright Office regulation states that “words and short phrases such as name, title and slogans are not subject to copyright.” It has been said that phrases conveys an idea typically expressed in a limited number of ways, therefore it is not subject to copyright protection. Also phrases are not protected under copyright because of the tendency to defeating the whole purpose of copyright which is creativity.  In other words, it doesn’t encourage creativity.

However there are some exceptions, to this rule. These exceptions are derived from decided cases in the United States of America, the country with the world’s leading entertainment industry. The protection of phrases is dependent upon the way in which both plaintiff and defendant use words. Anyone who asserts a proprietory right must demonstrate that the phrase or the way that the phrase is used is so unique as to justify protection. In the case of D.C. Comics, Inc. v. Crazy Eddie Inc.[1] the phrase “Look! …Up in the Sky! …it is a bird! …it is a plane! …it is superman!” was popularized through the exposure of Superman. Public acceptance of a literary phrase from a larger work, therefore invests that phrase with an element of materiality that it previously could not posses. Therefore where a phrase is popular due to the work of an inventor, he (the inventor) is entitled to protect it from copyright infringement. The phrase “SE KO WALE, KODURO SOKE” was made popular by Olamide in one of his musical works. Any lay man would attribute those words to only one person. Therefore he should be entitled to protect it from copyright infringement.

Another exception where the Judges in other jurisdictions have been found for the protection of phrases is where the phrase is invented, in other words, where such phrases have not particular meaning in English. The creator of an original language would be able to protect original expressions using that language.  However it should be noted that in the absence of language, it would be difficult to protect such single word in copyright. An example is the “Jabberwocky” case where the word was protected due to its use by the inventor in a famous poem. According to the British court, had it not been used in the famous poem, it would be questionable whether he had copyright in the word alone.[2] Therefore the invention of “Doro bucci” by Don jazzy should be protected under this premise.

Finally, under copyright, where a short phrase is used solely for its commercial and selling influence, the court may accept it as copyright infringement. Is that to say that there is an infringement of copyright, where Phyno’s Alobam or Wizkid’s “Yaga” is used to produces shirts, posters for movies or for other forms of advertisement? In DC Comics, Inc v. Crazy Eddie[3] where the owner of the copyright in Superman sued a chain store owner who had copied the trailer to the Superman TV show. The Court found the taking to be an “unjustifiable appropriation of copyrighted materials for personal profit”. It should be noted that even though there is a tenuous case for similarity for similarity between the works, the court is more bothered about the “use”. Such appropriation of another’s work may be interpreted as an endorsement. One query I have for this decision is that it is going into the realm of trade mark. However, this is a topic for another day and another article.

One rampant defense to a claim for infringement with regard to phrases and clauses is fair use. The copying of a phrase for a purpose such as criticism, comment, news reporting, teaching, scholarships or research commonly qualifies as fair use. However I doubt this form of defense will survive in a claim against the Aregbesola campaign team. I’ll leave you to figure that out based on the points enumerated above.

In conclusion, Nigerian authors or inventors in a more general sense should be more vigilant about their creations. The amount of infringement in the Nigerian entertainment industry is due to the nonchalant attitude of most creators of works. The sooner they know that the industry is not just about talent and getting endorsements but about building a business, the better for their careers and the growth of the industry in general. Creators of works should seek advice from legal professionals from the start of their business to the very end. The general notion is that you only need a lawyer when you want to sign endorsement deals (not even recording contracts) or when you want to set up a record label. The job of a Lawyer can make a difference even in the minute things like what to tweet. Closer attention to issues like this would definitely generate more income.

No Bump in Sight! Beyoncé Flaunts Curves on Exotic Vacation

Trained in both US and Nigerian Laws, Damilare Kujembola is an Attorney qualified to practice law in Nigeria, specializing in Entertainment and Intellectual property transactions. Through his practice, Mr. Kujembola has developed an expertise in the area of licensing, distribution and financing of entertainment content as well negotiating talent deals. Through his words, he hopes to inspire a change in the Nigerian Entertainment Industry. Email: [email protected]