Titilayo Olurin: Learning How to Maintain Your Resolve 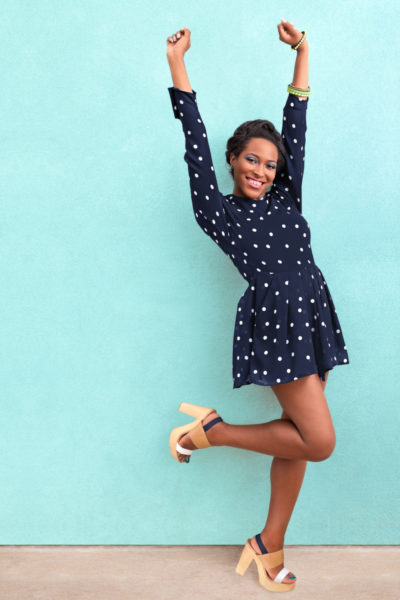 I was going to stay in bed till noon, then curl up on the couch in front of the TV, in my old, faded, over-sized pink night shirt, with the remote control in my hands, cuddling a throw pillow, and munching on any and everything that didn’t need to be cooked till late evening. Only then was I going to take a bath. After all, it was Saturday and I needed all the rest I could get. But my friend called and plans changed. She wanted to tell me something, she said. Did I promise never to tell anyone? Was I alone? She wasn’t on loud speaker, was she? Before I had the chance to reply her barrage of questions, she blurted out that she just had sex.

I hesitated, not sure how to respond. Although we talked about almost everything, we had never had such intimate conversation. In fact, there seemed to be a tacit agreement not to include the private details of our dating lives in our conversations. Yet, I suddenly felt like a priest she was making confessions to. The make out session with her boyfriend, she admitted, had gotten so heated that they broke the one resolve they had made at the beginning of their relationship of nearly two years never to have sex till marriage and she felt guilty about it.

Perhaps you have also broken a resolve you once made, and like my friend, you felt guilty about it. Do not think that you are alone. Most of us have at one point or another broken a resolve, no matter how little, and the feeling of guilt that sometimes comes with it only reminds us that we were not successful at out attempt to keep a firm decision or determination on a course of action. We generally make resolves to be better people; with the determination to start a project and complete it, to be kinder, nicer, or more generous, learn a skill, lose some weight, drop a bad habit, cultivate a good one, and achieve a goal.

Our resolves are often made with the best of intentions, but as soon as we make up our minds to be committed to them, we find ourselves breaking them and giving excuses for it. Rather than starting that project we vowed to start, learning the new skill we decided to learn, or dropping that bad habit we made up our minds to get rid of, we procrastinate and tell ourselves that there’ll always be tomorrow or the day after to do it.

The fact is, it takes a lot of self-discipline and determination to maintain a resolve; and although we hate to admit it, we don’t always possess as much of these qualities as we would like to. Ask me, I know. From the seemingly small resolve not to indulge my unhealthy (well, I guess I mean monstrously insatiable) cravings for cake, chocolate, and garri (Yes, the super dry, tasty, and sour Ijebu garri that I like to “munch”) to the much bigger ones of never throwing temper tantrums, stealing from work hours to aimlessly surf the Internet or engage in idle gossip and lazily abandoning projects, I have broken more than my fair share of resolves.

I often become laden with feelings of guilt, regret and disappointment after breaking a resolve. Then I begin to feel grossly incompetent and become even less willing to follow through. Once, after defying all odds to maintain a resolve not to indulge my chocolate cravings for an entire week, I gave in to the urge to buy three bars when I went grocery shopping. I convinced myself it was just that one time and would return to eating apples each time I had the urge to snack on chocolates. Oh, how wrong I was! With each bite came the guilt. I felt like I was cheating on myself. Still, I couldn’t stop and I felt even guiltier. But by the time I started digging into the last bar, I was able to shrug off the guilt easily with the words, “Well, what’s the use of stopping now?” And so, I went on a chocolate eating binge contest with myself for days after that until I realised I had to do something about it.

Doing something about it, meant making a new resolve and sticking to it. I decided to change my strategy. I wrote down the resolve along with a few others in a jotter I always had in my handbag. Since I saw the jotter often, I was constantly reminded of my resolves. Recently, too, I started writing them on stickers pasted to my bedside table.

Also, I made sure to write specifics. For instance, I would state quite clearly at the start of each day that I would avoid any situation that could upset me or leave the room whenever I felt my temper rising rather than just generally writing that I would never again get into a temper. This also made the task of maintaining each resolve less overwhelming. If at the end of the day, I succeeded in maintaining it, I would proceed to longer periods, like two, three or five days. Then I started checking each resolve that I had maintained off my list to see the progress I was making. It helped. Again, I thought of the joy I felt each time I followed through on a resolve. That alone was motivation.

If you’ve been beating yourself up for failing to follow through on a resolve, this is the time to stop. Think about what you need to do differently. Decide honestly within yourself to maintain it, be confident that you can, and expect to meet challenges so that you would be ready to overcome them. Attempt one at a time and begin with the small, simple resolves before proceeding to big ones to avoid being overwhelmed. You could also tell trust friends or family about it. That way you would have no choice but to follow through since you would not want to let them down. Besides, they could be a source of support. Above all, strengthen your resolve by thinking of the sense of accomplishment you would have after achieving a goal, completing a project, or dropping a bad habit.

From Feeling Unpretty to Faking Orgasms! We Had a Blast at Atoke’s “Friday Night Banter”