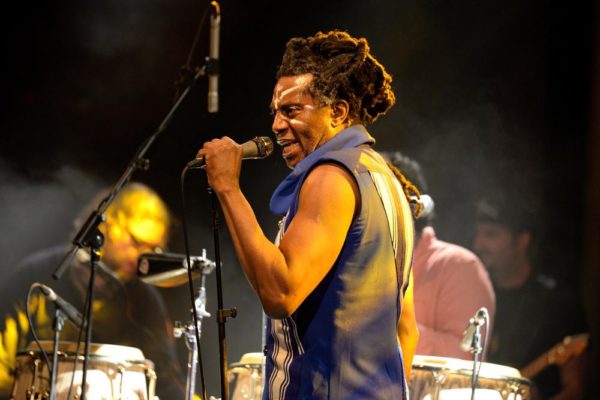 The first time I was ever at the ‘New Afrika Shrine’ was the night of my sister’s wedding in January 2014.
Back in UNILAG, I’d heard people say all sorts of things about the shrine. This was six years later and of course my imagination of what I’d get there was still very lit!

Scantily clad women in cages, shaking, twirling and turning to the loud sounds of Femi Kuti’s voice and an incredibly heavy band dishing out unbelievable instrumentation, which would be quietly, but surely assisted by the gentle sounds of beads clanging against each other – softly brushing against the dancers’ bodies. I’d been told about how there was usually literally no space to keep one’s feet at Afrika Shrine whenever Seun or Femi was playing; about how crazy the crowd went from the sounds of the music.

That Saturday night was quite an interesting one. Interesting activity at the entrance *wink*. Those guys don’t play! By the time the show started, I could swear I’d never seen that number of grown men on one stage before! Yes, it wasn’t exactly what I had always imagined it to be but it was a fun night out.

Rewind… Probably to the early ‘70s when I was not even born. Almost the same setting in the former Afrika Shrine somewhere in Allen, Ikeja which was later burnt down.

The man, Fela Anikulapo-Kuti in all his glory, almost as scantily dressed as the dancers and sending his listeners to a different level of sound with his eccentric performance style. In that nightclub began a genre of its own: Afrobeat!

Fela’s music had a lot of foreign influences stemming from having lived, studied, learnt and played in various countries including Ghana and the United Kingdom. The Afrobeat sound was different and special; an interesting mixture of Jazz, traditional Nigerian Music and highlife, American funk music among many other different styles of music.

Characterized by call-and-response and rhythmic chanting, something else that made Afrobeat music different is the instrumentation. Fela was a band-leader and a multi-instrumentalist and the Afrobeat band would usually consist of loads of instruments such as the trombone, conga, trumpet, and saxophone, drums, bass and lead guitars, shekere among others. Fola was arguably a very interesting personality and used his then unconventional style of music as a weapon to transform the Nigerian music space and also to speak about the Nigerian socio-economic and political space.

Now let’s add an ‘s’. Afrobeats! I honestly have never been able to understand why the names have to be so similar and why there cannot be a clear distinction. Joey Akan of Pulse Ng refers to Afrobeats as ‘a reductionist neologism fed to the international media, and providing a foreign and convenient narrative to classify the African popular music which contains a 21st-century fusion of western rap influences, and contemporary Ghanaian and Nigerian pop music’. I think I agree! Don’t get me wrong, I love and appreciate Afro-pop sounds. I can’t deny how Wizkid’s ‘Ojuelegba’ makes me (and most other people) sway and nod my head, and how 2Baba can do no wrong with his sound. I’m a sucker for Sarkodie, his voice and his style of rap. I mean we went from the days where having a party without ‘jamming’ foreign (American) songs was a taboo, to now when even the cool kids can get away with grooving to Afro-pop music. There’s definitely nothing not to love about that. That said, I dare say that Afrobeats is not a genre of music. You see, contemporary African music comes in various forms and styles.

The sounds of a man like Olamide (in my opinion) can in no way be compared to what you will get from a Timaya or Davido and there’ll all afro-pop. Afro-pop music consists of all genres of popular music ranging from rap to Afro hip-hop, to soukous to even African trap music. We Africans produce these amazing pop sounds with our pop beats and even create our own unique dance steps. We should own it. If anyone should be telling our stories, it should be us!

Adding an ‘s’ to a genre which stands on its own already is a very confusing narrative that someone else is telling on our behalf, totally downplays the growth that African music has experienced and the versatility of our African artistes. I always wonder, ‘Why was Afrobeat picked on to be pluralized?’. Why not ‘Juju’ so we can have ‘Jujus’ or ‘Soukous’ so we can have ‘Soukouses’. If we need one name for every popular music out of Africa, then I think ‘Afro-pop’ suffices.

Fela (and those who have stuck to that sound)’s iconic genre of music is Afrobeat; and then we have all the other numerous popular music genres which our African artistes have been able to excel at which have all been lumped up and called ‘Afrobeats’. Confusingly so.

I am a music blogger for www.naijaandalternativemusic.wordpress.com and a student of the media with a lot of passion for the entertainment media, live music and alternative music in Nigeria. I am mostly a tomboy, I love make up and I'm crazy about my natural hair!