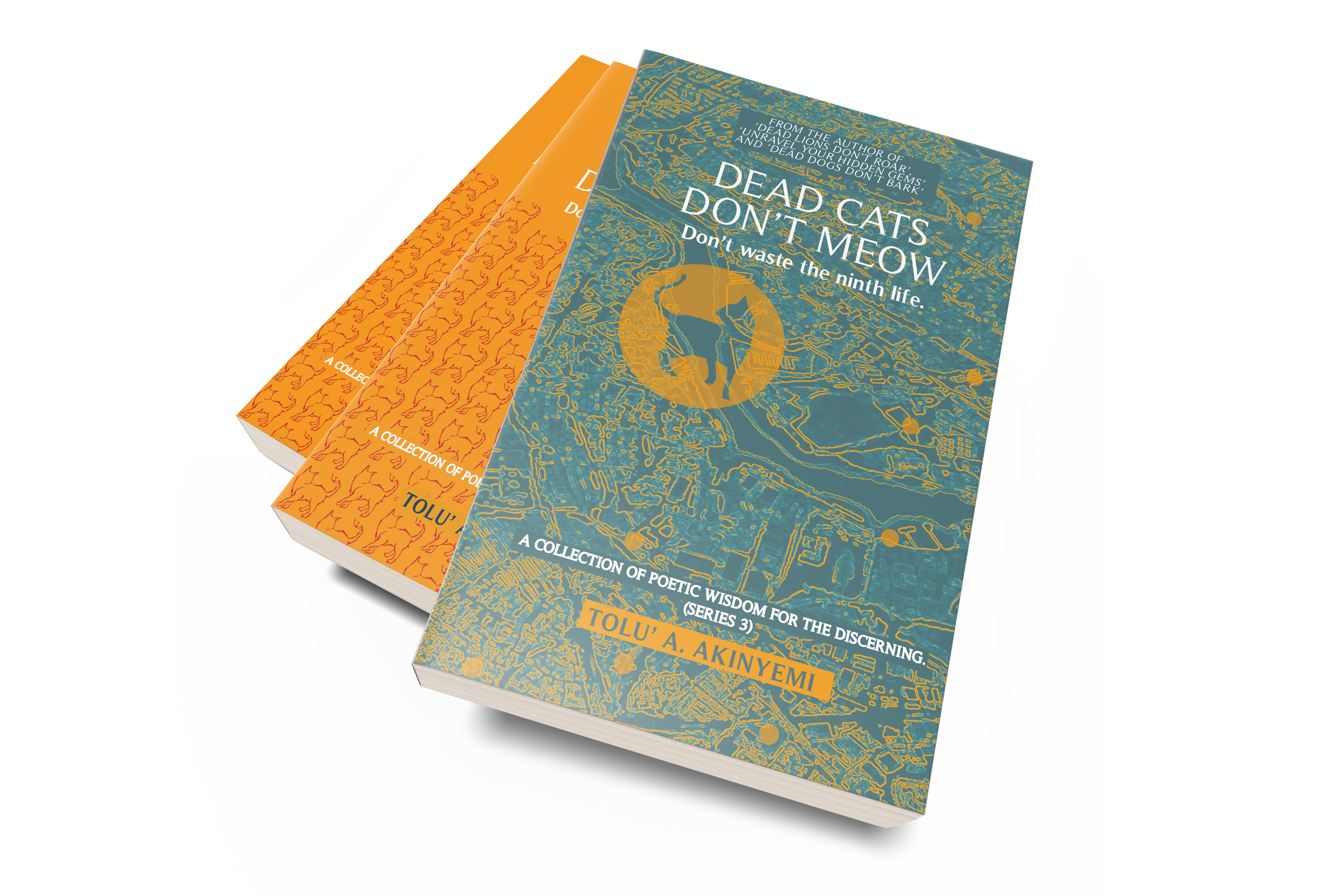 I found myself ruminating on the above statement by T.S Eliot after I read Tolu’ A. Akinyemi’s latest collection of poems, “Dead Cats Don’t Meow”. The phrase, “poetry…is not the expression of personality, but an escape from personality” stuck to my brain like gum to paper. In “Dead Cats Don’t Meow”, Tolu fought hard to extricate himself and his personal experiences from his art, but his perfectly-crafted words betrayed him, as they sounded like the words of a man possessed by the gods for good cause. His words were perfectly weighted, bringing to the front-burner, difficult, topical issues that society would rather sweep under the carpet than discuss.

The first thing that struck me about this poetry collection “Dead Cats Don’t Meow” was, of course, the title of the book. I was fascinated by the simplicity, yet, ingenuity of it. I shouldn’t be. I know I shouldn’t, because I have read Tolu’s previous collections of poems: “Dead Lions Don’t Roar”– his first; and “Dead Dogs Don’t Bark” – his second. So, I know Tolu has a bias for sticking with unique – and I dare say – poetic titles for his poetry collections (pun intended).

In this review, I will try as much as possible, to refrain from explaining the poems in this collection, because I am reminded of Nassim Nicholas Taleb’s evergreen words: “if you want to annoy a poet, explain his poetry”. So, I won’t explain Tolu’s poems; I will examine them.

“Dead Cats Don’t Meow” opens with a poem titled “My Story”. Here, the poet appears to give an insight into his tall defiance of life challenges in a foreign land. For those who don’t know, Tolu A. Akinyemi was born in Ado-Ekiti, Nigeria, but he currently lives in the United Kingdom. A very powerful line in this poem reads thus: “tell them I came in the form of a man but a lion in disguise”. This poem would resonate with just about anyone who finds himself in a new territory, a new work place, a new residential area, a new project etc. Tolu makes no pretences that, in life, everyone would face challenges; everyone would come across mountains, but this poem is quick to remind us that mountains are meant to be climbed.

In “Hungry”, the typical dastardly reaction of the bourgeoisie in the society upon being accosted by the proletariat – or members of the society who are considered lesser than the proletariats – seems to be the meat of the poem. The poem closes with the line “I am hungry Not angry”, a reminder to the man seated at the back of a car when approached by a beggar. I can imagine Tolu trying to pass across the message: do not wince in disgust when a beggar asks for alms. Help if you can. He is only hungry; he is not angry at you.

In “Don’t Call Her Mummy” and “August Fourteen”, the poet appears to leverage on the current long-overdue societal trend, which calls for the empowerment of women. Here, Tolu pays respect to women, saying “To me she is first lady” and “words are not enough to define your worth”. In “Fire”, “Things We Say For Love” and “Valentine”, Tolu explores the deep mystery of love. He identifies what it ought to be and what it appears to have become. In “King”, the poet pays homage to men who take responsibilities, while in “Deadbeat Father”, the poet boldly calls out men (fathers) who don’t.

In “Black and Exceptional” and “Colour Brave” Tolu tackles the topical issue of race, saying “I am proud to be black” and “Don’t treat me as an outcast”. In “Mistakes” Tolu focuses on a deep-rooted issue in every friendship and why such issue should not be allowed to define something so beautiful. In “Resolution”, the poet reminds everyone to give themselves a second chance. “I am Booktiful” comes across as a diss against people who are proud of their non-reading lifestyle, while, “You are Booktiful” encourages self-belief. Another poem which slightly touches on the theme of “You are Booktiful” is “Global” which preaches the beauty of individual uniqueness. In “An Ode to the Poet” and “Realistic Poet”, Tolu pays tribute to poets and empathises with them for being underappreciated sometimes. In “Children of Nowadays” and “Youthful Exuberance”, the poet recognises the modern child. Tolu pays tribute to his country of birth, Nigeria with poems like “Ojota Park”, “Computer Village”, “Oshodi”, “Lagos Traffic” and “Nigeria”.

This collection of poem may not have been complete without poems like “Dead Cats Don’t Meow” and “Dead Lions Don’t Roar 2”. In both poems, the poet re-echoes the importance of self-belief and the need to take action, no matter the condition one finds himself.

In all, this poetry collection “Dead Cats Don’t Meow” generally emphasizes the theme of self-belief and taking action. It reminds me of the saying “if you think you are too little to make an impact, try staying in a room with a mosquito.”

As much as I love “Dead Cats Don’t Meow” for the above-mentioned themes it portrays, I strongly believe these themes are also the Achilles heel of the work. I say this in the light of the fact that, some of the poems do not possess or portray these themes. For instance, there appears to be no correlation between what poems like “Lagos Traffic”, “Ojota Park” and “Oshodi” address, and what the general theme of the book is. The messages in those poems appear lost in the body of work. The foregoing point may, however, be interpreted as a deliberate metaphor by the poet to suggest that, there would be no success without struggle. A metaphor for hope? I derive inspiration for the foregoing conclusion from the closing lines of “Oshodi” where the poet says,

Oshodi was the aberration of what a community should be

Now finding its way back to reckoning”

As a corollary to the above, I believe if the poems in this collection were arranged/grouped in distinct, explained Parts (e.g each Part would contain a number of poems that express a certain emotion or message), this may have helped in guiding the reader’s thoughts. Thankfully, Don Marquis once likened writing a book of poetry to “dropping a rose petal down the Grand Canyon and waiting for the echo.” In this context, it makes sense that, Tolu’s poetry collection is left as it is, as this affords the reader an opportunity to experience and interpret the different, flowing emotions buried in each page of the book.

In conclusion, Tolu deserves commendation for his choice of simple, comprehensible writing style and language. This makes “Dead Cats Don’t Meow” attractive to both the young and the old. You can contact the poet here and here. Check out more about the book here.