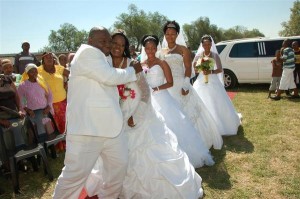 The New Year is often synonymous with new beginnings, resolutions and plenty prayers. Prayers that the future will be better than the past or at least a little bit more bearable. For many single young  people, the prayers are often tilted towards the direction of “Settle Down” and “Marriage” and yours truly got a fair dose of it. I mean, when you’re from a large Yoruba family you’d get a lot of prayers that “This Year Will NOT pass you by! This Year, We Will Gather To Celebrate You.”  After plenty prayers, one of my aunties was not content with just the prayers as she probed further, wanting to know if there was really nobody I could consider? “Even if it’s to have a baby; you know time is going.” After nearly laughing my head off to the expression “Time is going” I asked her if she meant a “sperm donor”. “No jor! You know what I mean. Give the child a chance at a real family. A real mother with a real father, not just a number in a database. There are men who will be willing that you can have a child for, even if he’s married, ko matter, shebi it’s for you to have a baby. You’re a woman, your body clock is ticking away.”

As this was not the first time I’d heard about this body clock and its supposed ticking, I hung on to the one thing that struck louder than a gong in my head… the woman was actually suggesting that it was actually alright to have a baby for a married man. So I said, “Ah! Aunty, you want me to be a second wife.” As soon as the words dropped out of my mouth, and in the tone it did, I was immediately apologetic. I sounded like a condescending person. After all, polygamy is socially acceptable in Africa, and even in some parts of Nigeria, being married under traditional customs and practices overrides being married under the Marriage Act.  I asked a diverse range of people on their thoughts about polygamy; some people said it was stressful, but could be done if the man can manage his home adequately. Some people said it was too expensive and not worth the effort. I asked a friend whose mom was the 3rd wife of her dad and she said that the concept of polygamy was not as outrageous as a lot of people made it out to be. “My mom had her house in Lagos, and we didn’t live with the other wives.”

So, I’d established that polygamy was socially acceptable and put this up as my status “Why is polygamy socially acceptable but cheating on your spouse is frowned upon?”  My thought process was this: before a person can be your second wife, or third wife, it means you’re making amorous advances towards her right? It also means you’re technically breaking your vow to love and cherish the first woman you’re married to. I’ll share some of the responses I got with you – ” Who says cheating is frowned upon? It’s getting caught that is”/ “Secret sex is sweeter than the legit one. Bye” / “Because in the latter, you’re not hiding anything. It’s in the open”.

Richard argued that not all polygamous marriages are born out of ‘cheating’. He argued that there were often mitigating circumstances which led to the former being in place without the necessity of the latter.

What do you guys think? Is cheating the progenitor of polygamy? Can we have one without the other? Do you agree that it’s not cheating if the spouse has an expectation that her husband is polygamaous and as such he has to court her ‘successor’? finally, if a woman has a baby for a man who is married to one wife and she calls herself Mrs *insert the name* is that still a monogamy?