Russel Oyakhire: When It's Wrong To Be Young 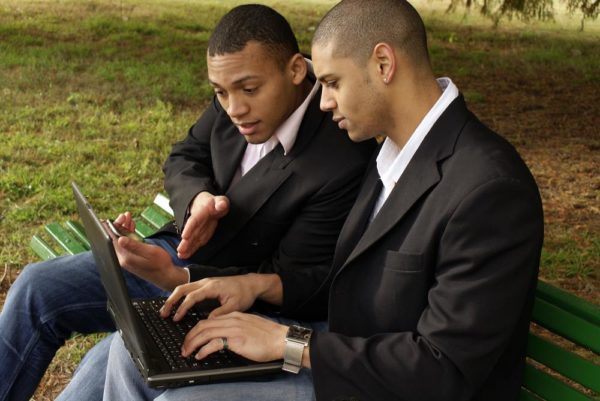 I was bullied recently, and by an older man. He usurped my position in the queue. I couldn’t let it fly, so I confronted him. Instead of retreat he began an oration, making it crystal clear to me how much older he is than I am; how he was mature and I was not. He climaxed with. “You don’t have proper-home-training”.

My stomach burned, it was like drinking hot ‘akamu’ but forgetting to follow the standard protocol of breathing fervently onto each spoonful before swallowing. I shot one last glare at him but I didn’t fight back, instead I gave up my spot out of shame: the old man was ready to embarrass himself; I was not. But it struck me at how he had believed he was mature just because he was older. That he was right because he was bald, that he was wise just because he was born before I was. There was a finality in his tone. And the hall supported him with their silence, no one dared questioned his assault. He was older, I was younger; I had to be wrong.

I remember dreading visits to my Course Adviser’s office during my university days. He spat his insults with delight. He enjoyed the power he had over his students. He was a demi-god. A visit to his 4 by 6 ‘cell’ was a psychological mayhem. We all deduced that there was no way in hell he could be married. No woman could live with that. His name became a synonym for crudity and although other lecturers were aware of his attitude, they condoned it. After-all, it wasn’t towards them – ‘the matured ones’. However, rumour echoed in the hostel corridors of a boy who once dared to question him. The details are sketchy, much like a fairy tale but the evidence is a swell at the back of the lecturer’s head attributed to the student that dared confront him. They both; student and lecturer engaged in a physical bout which led to a promiscuous protrusion at the back of the lecturers head.

Unfortunately, my generation isn’t any better. We are infamous for ‘419’ – fraud, examination malpractice, intolerance, violence, promiscuity and the list goes on. So who would take us seriously? Our fathers are not saints. We are not saints either. But that doesn’t mean all the eggs are bad. Some, albeit many are like me are stuck in a banking hall without a voice of our own because no one cares about what we have to say. The consensus is that we are wrong. Just because…

Our founding fathers sounded so eloquent. You should listen to old broadcasts of the 60s through to the 70s. They were amazing! For me, listening to their rich, British-scented tone was a conviction of the saying ‘the good old days’. It felt like a land of opportunity existed then and there was room to grow. A lot of water has passed under that bridge since then. The dirty laundry of our nation’s history still haunts us till this day but I digress.

It would seem that the opportunity bracket is thinner today, that not many are prepared to give way to the younger generation coming behind. Look at our government closely, the same people still linger in the corridors of power. Many Nigerian businesses are yet to rise beyond the image of their founders. Pastor Wale Adefarasin calls it a ‘generational succession’ problem.

Why the distrust between generations? Why such a dichotomy of paths? This is not to say that efforts aren’t been made by some much older to bridge the gap with the younger but like my elderly-bully, and vicious lecturer, a huge gap still cuts deep through. The root of the matter may stem from much deeper within the family tree – a disconnect of fathers from sons, a traditional upbringing based on fear rather than love, or as a result of a disgust for our leadership who are supposed to be our fathers. No matter, the fact remains, that there looms a divide that not one man alone can solve.

A red sea that was ‘part’ a long time ago that never came back together again.

Fountain of Life with Taiwo Odukoya: Deactivating Malice Before It Destroys Your Home

Soaring in the clouds with the wind beneath my winds: i am a guy with an eagles perspective...seeing with my eyes and speaking with my pen.