Amo & Reda: 5 Interesting Things We Learned About Nigeria in the Wake of #OkoyeGate 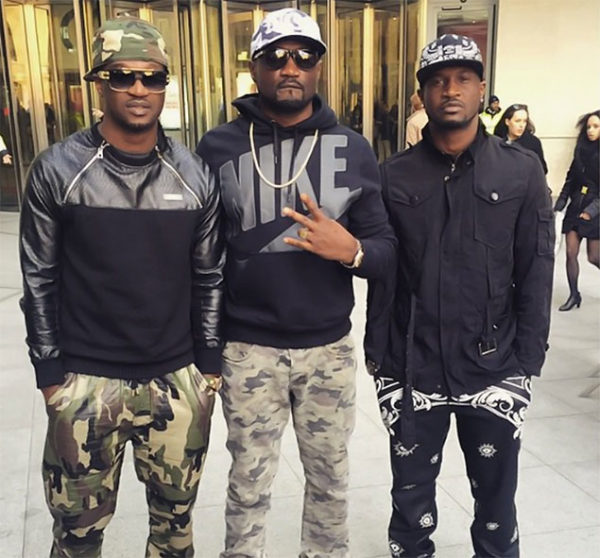 This year has been eventful on social media – Nigerian edition. Our celebrities seem to be taking things up a notch with their indiscretions and their insatiable need to keep us abreast of everything – Good, Bad & Ugly. We aren’t complaining, as long as they keep us entertained and help us not think about the horrible state of our economy, we’re good.

We aren’t that different from other Nigerians, we too enjoy the distractions and find them welcoming sometimes; but, we also believe that these “moments” can give us a little insight into the minds of Nigerians. You know how we love majoring in the minors and minoring in majors.

Last week on NaijaTwitter, Peter Okoye of the P-Square musical duo stepped up to the stage (dragging his brothers with him)- and relieved us from the devastating news of the continuous free fall of the Naira to N385 against the dollar.
Now, if you’re not aware of the details of the Okoye Brouhaha {Click here and here to catch up. Don’t hold back the class}.

Thanks to the Okoyes and the subsequent fallout (comments, blog posts), we were able to sift five things wrong with Nigeria and Nigerians

Women Are Blamed For Everything
Women! Those blasted buggers created from Adam’s rib (depending on which version of the creation of man you choose to believe.)
From the OkoyeGate fiasco, one can deduce that women are the cause of EVERY and ANY of life’s problems. In fact, women should also magically be able to fix all existing family rifts which they may or may not have caused. That seemed to be the idea behind invoking all the women associated with the Okoye twins. Lola, Peter’s wife, was cast in the role of controlling woman. Anita, Paul’s wife, in the role of the Madonna, the innocent pure one, the opposite of Lola. (we’ll leavepitting women against each other for another post) Even the twins’ dead mother wasn’t left out. Her missing influence caused Peter to spiral into #1 Social Media Oversharer. So which is it Nigeria? Do we need these women to stop controlling their men? To pray for them? Or maybe they actually have nothing to do with this? Maybe, just maybe, these grown ass adult men, with a combined age of 100+ years and with pikins of their own, are making bad decisions themselves. Do let us know.

Tribes don’t mix and shouldn’t mix
Nigerians…we use every opportunity to show our inter-tribal hating behinds, and OkoyeGate was no different. Lola has the “unfortunate” double whammy of being a woman AND Yoruba as well. *gasp* Yes, Peter, an Igbo man, married a yoruba woman and that made him a brother-backstabbing, social media ranter. No wait… we learned, according to the comments on social media that Yorubas are polygamous which is why they spread discord and Peter should have found a mate within his tribe to prevent him from…

Hold on… we’re trying to find the correlation between, tribe and a social media rant between brothers about their music business.

While we’re trying to figure this out, imagine our surprise that music legend, Onyeka Onwenu complained that she was divested of her political appointment because of her tribe. Maybe she can shed some light on this since she is well versed in tribalism matters and how they affect your paper.

Dear Nigerians, not everything is a tribal war. Trust us.

And so when Jude tweeted that Peter needed to be prayed for, no one seemed to see that as a patronising dismissal of Peter’s concerns or accusations. They saw it as a genuine, straightforward plea. He was even commended for taking the high road. The wives have also been asked to pray for their spouses.
Can we stop closing our eyes and start using our mouths to speak to one another and use our hands to do actual things? The Okoyes know what the problems are, there is no need to climb to the mountain to get the revelation from God. Peter has kindly laid them out in lovely tweets. Just solve them. Same goes to our politicians. ‘God dey’ shouldn’t be enough. In fact, it isn’t.
We know what the problems are, open your eyes and fix them…and our Naira.

Seniority trumps all – in family and business
Respect your elders… see those gray hairs, they didn’t show up overnight. The only defence which the social media advocates seem to have for Jude appears to be: he’s the older brother. By virtue of being born before Peter, he deserves respect.

We live in a society where age is mistaken for wisdom and common sense. In fact, being older means being automatically bestowed with the right to all knowing knowledge and wisdom. It is why we see people in the workplace getting antsy at the idea having to answer to a superior who is “just 27 years old”. An older person in Nigeria gets away with everything. Just peep at the cadre of people in our political caucus. Don’t even get us started on the people who head the “youth” in Nigeria, we still haven’t recovered from PDP’s Papa Garba.

If we need to state it clearly, we will: BEING OLDER DOES NOT MEAN YOU ARE RIGHT & YOU KNOW IT ALL! Sit yo ass all the way down and be willing to listen AND learn.

Denying that these problems are our next biggest issues
So, you’ve been reading these points and rolling your eyes… anxious to get to the end so you can quickly respond and call us awful names for poking holes in the facade that you’ve wrapped yourself in. Well, this fifth hole is for you. Nobody buries their heads in the sand deeper than Nigerians.

Random person: “The education system is so bad.”
Nigerian: “It’s the same in America”

Random person: This spiritual leader is embezzling funds…blatantly
Nigerian: “He’s doing the work of God. He will answer query in heaven”

Random person: It’s interesting that this generation is just as tribalistic as our grandparents’
Nigerian: You want us to forget Awolowo betrayed Ojukwu?

Yes, you’re a problem too. Why don’t you want the rest of us to elevate? To “glo up”? Abi you don’t want Before and After pictures?

We have to face our glaring reality in the face and not flinch. Only then can we begin to fix this mess called Nigeria.

Work Mode with Brown Uzoukwu: Coping in Lagos as a Professional Without a Car

Redefining PR with Chude Jideonwo: The Trouble With RealityTV Show Kind of PR

Amo & Reda really tried to figure out a catchy bio - they couldn't. So, while they work out the kinks, here are some basics: 1: Nigerian 2: Women Really couldn't have picked shorter straws could they? You can reach them by email: [email protected]