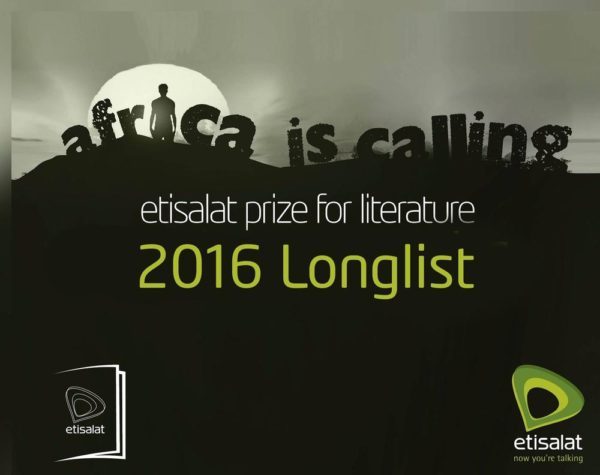 Helon Habila, chair of the judging panel of the 2016 Etisalat Prize for Literature, has announced the 2016 longlist of nine books. The longlist is made up of entries from first-time authors whose books were published in the past 24 months.

Etisalat Prize for Literature is a pan-African prize that celebrates debut African writers of published book-length fiction. Previous winners include Zimbabwe’s NoViolet Bulawayo in 2013 for her novel We Need New Names, South Africa’s Songeziwe Mahlangu in 2014 for Penumbra and Democratic Republic of Congo’s Fiston Mwanza Mujila, whose book Tram 83 won the Etisalat Prize in 2015.

The Etisalat Prize for Literature also incorporates an award for Flash Fiction; an online-based competition for non-published African writers of short stories.

“The novels in this year’s longlist represent a good number of African publishing companies. Each novel reflects a very interesting and dynamic perspective that will provoke intense conversations about different personal and societal issues.”

The judging panel, comprising Nigerian novelist and poet, Helon Habila (Chair), South African writer/activist Elinor Sisulu and Ivorian writer and Africa39 laureate Edwige Rene Dro, now has the task of selecting three authors for the shortlist, which will be unveiled in December.

The winner of the 2016 Etisalat Prize for Literature will be announced in March 2017 and will receive £15,000, an engraved Montblanc Meisterstück pen, and an Etisalat-sponsored fellowship at the University of East Anglia to be mentored by renowned Professor Giles Foden, author of The Last King of Scotland.

Congratulations to the long listed authors! We can’t wait to find out who makes the shortlist.

BellaNaija book lovers, have you read any of these books? Which do you like best? Tell us.

WATCH: Soldiers Reveal why they Protested in Sambisa – “There’s no food to eat…. no water to drink, nothing”