#LiterallyWhatsHot: Raw is the Word - A Review of Abiola AA's Catharsis 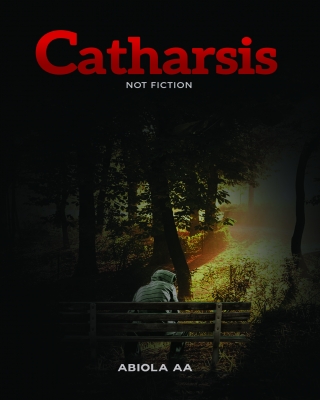 Life hands us different cards at its large table, and it’s up to us to play things out until we can make something out of our existence. However, it has to be admitted that some are luckier than others, and indeed there are quite a few who seem to have come into the world with a very limited “happiness quota” of sorts.

For many of us, the easier option is to smile through the pain and unsure moments, so we don’t appear too pathetic, so we can appear to be getting by too even where the opposite is the case, particularly in the face of social media and its attendant pressures.

There are those, however, who choose to bare it all out, either because it is more dangerous for them to hold it in, or because they intend to use their stories to inspire others. The rating of this book as 18+ further served to pique my interest, and I was eager to see what the author had in store.

The writer in focus, Abiola AA, is a graduate of Dramatic Arts who earned his Bachelor Degree from Obafemi Awolowo University, Ile Ife. A social media consultant and public relations strategist as well, Abiola scribbles stories on his Instagram timeline where he enjoys a good following, and he also writes scripts for production companies.

“Catharsis” is a non-fictional literary offering which chronicles the writer’s struggles from childhood to present. In quite a few pages, Abiola takes us on a journey through his past, fraught with an abusive father, domestic violence, indifferent relatives and emotional torture. He also lets us in on his travails at secondary school and the university, where he owns up to his reputation as a rebel, navigates his heart through a number of non-committal relationships, and fights to make a mark for himself. He also sheds light on his brother’s struggle with cancer, the psychological effect of the diagnosis on an already broken family, and his own self-esteem issues.

The book is nothing if not honest, and it depicts a young man’s search for meaning, his quest for validation, his battle to earn the respect of his mother and siblings. Here we see a broken man, reeling from the effects of a troubled childhood, unable to love, continually feeling that he may never be good enough, and you would need to have a heart of stone to not sympathise with him. The language is explicit, and Abiola is pretty descriptive with the intimate details, but he somehow manages to not be vulgar. There is no stating whether the identities of the characters in this book are protected, and quite frankly I don’t think the author cared too much about that. But there is an outpouring, a purgation, and when you think of the word “raw”, this narrative comes to mind.

There is clearly an emphasis of content over style here, and while “Catharsis” passes the basic tests of grammar, it does not have much going for it in terms of structure. The mix-up of tenses in various portions is distracting, and a good number of pages screamed for the services of an editor. The storytelling is by no means masterful, but the emotion is enough to sustain the reader’s attention, and sometimes that is all a manuscript needs.

“Catharsis” does not close out with a happy ending, and while there are hints of progress and optimism, it is evident that Abiola is still going through the emotions. It’s a good thing that his pain is being channeled into something productive such as this, and it is hoped that not only does he get to figure things out, but that his craft grows immensely as well, enough to eclipse a debut that boasts of spirit, if not expertise.

Want a copy of Abiola AA’s “Catharsis“? Get one here on the OkadaBooks store.

Share Anonymous: Stay Alert by Identifying How Children are Groomed for Sexual Exploitation