#LiterallyWhatsHot: Being a Student At The University of Ibadan Doesn't Stop Her From Crime Fighting - Ireti Bidemi, Issue 3 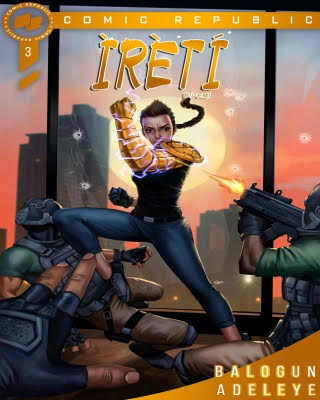 It’s dusk- the beautiful African sunset is giving way to the shroud of darkness, the sky a purplish hue. NEPA hasn’t taken the light in Mokola, Ibadan, and so the city is alive, in the way only a buzzing West African metropolis can be at times such as these. The streets are busy with traffic, and the glow of electric lights contrasts with the familiar green of the inescapable presence of nature….that glimpse of the mystery of the ubiquitous African forest that lies at the edge of every Nigerian city skyline.

This is the opening of Ireti Bidemi, issue 3– the latest of a series of adventure comics from Nigerian-based comics publisher “Comic Republic”, Written and colored by Michael “Balox” Balogun (with art by Adeleye Yussuf). This oh-so-familiar yet mysterious setting reveals itself to be the site of a clandestine meeting between two interesting individuals- an imposing young fellow known only as “Ake”, and a mysterious man in a colourful mask- the first hint that this is no mundane story, but rather a fantastic action romp involving heroes and villains with superpowers!

It so happens that many years ago, after the Mighty Warrior, Ireti Moremi fell in battle, a girl named Bidemi surfaces out of the blue. There’s one catch though. She posses the same strength and superpowers as the late warrior, and adopts the name, “Ireti”. Being a student of Archeology Department, Ibadan University doesn’t stop her from venturing into crime fighting, as she has sworn to fight only for the greater good of the world.

The Nigerian comic scene has been coming alive recently- after the recently released (and incredibly well received) Hollywood movie “Black Panther” followed in the footsteps of the previously released “Captain America: Civil War” in bringing the action-packed superheroics of age-old costumed crusaders to authentic-looking (if also fictitious, in the case of Black Panther’s Wakanda) African cities, these comics go one step further by not only bringing these actions to actually authentic locations but to authentic characters as well.

Ake, with his dress sense, demeanor, and tendency to blame his lateness to meetings on traffic, could be a character from any other tale about a bank robbery in Bodija…and then he leaps off a motorcycle to attack a masked girl chasing him on the back of a van….

…who then proceeds to summon a beautiful golden gauntlet to her arm that will please anyone who is at least interested in traditional West African carvings!

Needless to say, this is a book that will provide intense action, an authentic, relatable setting, beautiful artwork and a good solid dose of super-powered action, sure to brighten the day of any fan of comic books and action.

Be sure to take a look at this one, and if you’re interested in knowing just how it turns out that Bidemi is on the scene in such a timely fashion (or how she got her hands on that oh-so-sweet gauntlet), don’t miss the previous episodes!

Available on OkadaBooks, you should get a copy of Ireti Bidemi Issue 3 here. Wale Awelenje is head of Story at Comic Republic, and has been in love with superheroes ever since he told his dad he would build a comic factory when he grows up.

He has written a comic book here and there, and in a parallel reality, does as much writing for machines as he does for human beings!
Related Topics:Book ReviewComic RepublicIreti BidemiOkadabooksOkadaBooks Review
Up Next