AnuOluwapo Adelakun: The Fragile Masculinity of the Typical Nigerian Driver 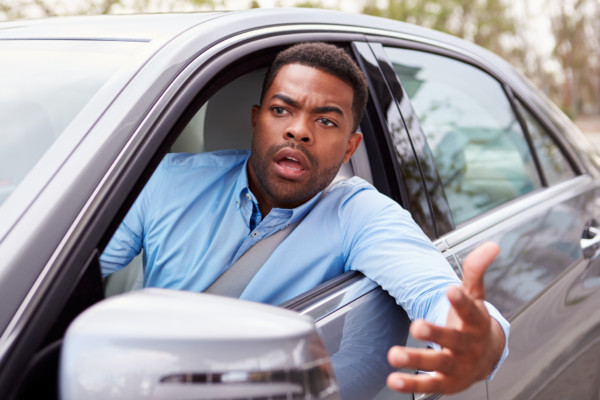 When you drive in Nigeria, believe you’re the only sane person on the road. Everyone else is simply mad – Anonymous

Several times I’ve had to question the sanity of many Nigerians. In a society where mental health issues are largely unrecognised, you find yourself diagnosing (in your mind) the people behind the steering of cars, auto-rickshaws, and motorcycles – both male and female.

You don’t have to be a fellow driver to experience this; being a passenger is enough to experience the trials and tribulations of commuting in Nigeria, especially in the commercial cities. For instance, the drivers of most yellow buses in Lagos are calmest when they’re waiting for passengers to board their box-like metal-framed Volkswagen buses with wooden chairs that are best known for rendering the blood-vessels in your buttocks numb or tearing into your skirt or trousers. Those evil things.

The conductors are dramatic enough to cajole you into the bus, and then it’s time to move. The driver, like a skilled yet tacky electrician, bends forward and under the steering to marry two naked wires in order to turn on the ignition. After several horse-neighing impressions by the car, it finally starts, and the journey to madness begins. First your nose is molested by the putrid stench from the hairy armpit of the bus conductor, who stretches over heads with an insult-laden tongue, asking for the fares to be paid. Then you’re treated to a bespoke exhibition of exposed buttocks, which should otherwise be shrouded in a pair of underwear.

Traffic is to Lagos as air is to every human, and so you soon run into some traffic. Then the madness manifests in full swing. Culverts, reserved BRT lanes, opposite lanes—as long as tires can ply the platform, you find yourself humpty dumptying through traffic. Like one on a suicide mission, the driver speeds toward incoming traffic of rickety Maersk container-laden trucks. You say your last prayer. You all narrowly escape death and finally find yourself on a saner route, but everyone is shouting at the driver who doesn’t give a hoot. Suddenly, a car  overtakes the bus and the driver stretches his neck to see who the driver might be. It’s a female driver. What? Na Woman? Who gave her a car? I don’t blame her, I blame the people who bought her a car. And then the race to overtake begins.

Let’s stop right here to talk about the frail masculinity of many drivers in Nigeria.

It is a tangible non-generic theory, where a good population of male drivers in Nigeria believe they are better drivers than their female counterparts. They get mad if you speed past them, overtake them, horn at them, get ahead of them, or exercise your right of way. They prefer subservient drivers whom they can bully on roads and when they can’t? I’ll begin with a recent experience.

On this fateful day, I hopped in an Uber to take me somewhere in Lagos. The journey was a quiet one, as I was lost in my thoughts about the many ways to deal with my fair share of the Nigerian frustration. We were going slowly on a road that was generally free, when a jeep went past the car and in front of us. A startled Uber driver just yelled, What kind of insult is this from a soldier? I was wondering what happened.

We got closer to the car and realized that it was a female soldier driving the car. I beamed with a smile, because I hardly ever come across female soldiers. I wanted to wave at her when the Uber driver began to lament, What is all this nonsense. I pay my tax. Why would a woman ‘solja’ just overtake me on the road? I was as confused as you are now, reading this. I asked him what he meant, in an effort to try to make some logical sense of what he said. An ordinary woman can never overtake me when I drive. This one thinks because she’s a solja, she can bully me. Still made no sense to me, so I sat back at looked at something else. Then I realised we had begun to go faster. Having survived a crash on that same route months before, I asked him to slow down. I could tell that he was unhappy, and when the soldier slowed down, he spawned his left palm open so that all his fingers spread apart and his veins bulged under his skin, and he pointed them in her direction releasing the wrath of his anger. Waka! he screamed.

You find similar circumstances with the drivers of auto-rickshaws and motorcycles. They get mad when women overtake them on the road, as if their birthright had just been stolen. When there’s a calm driver slowly making their way through, they all say, Na woman.

In Ibadan, most of the ‘Micra’ cabs are a nuisance that creep in and creep out of the highways like they’re driven by drunk lunatics. It appears that the men behind these vehicles imagine that their cars can shrink into small places and unshrink afterward, as they always try to wriggle between cars in traffic. When they fail to get their way, they rain curses on you ‘Ibadan-style,’ and if you’re a woman, you’re not only insulted, they often send your husband their condolences for being so unfortunate as to end up with a stubborn woman like you, a woman who won’t let their cars through in an impossible gridlock (because they mostly assume that you must be married to drive a car).

In Benin, the cab drivers assume that their horns are ineffective, so they also scream while blaring their horns at you in traffic. And while you drive in a defensive fashion as to avoid brushes or outright jams, they drive past you insulting not just you, but the entire womenfolk. I once heard one Benin cab driver say that if he became president, he would ban women from driving.

Whether it be Abuja, Abakaliki, Enugu, or Ilorin as I’ve experienced, one thing that seems to resonate with drivers across Nigeria is a consistent road rage that I assume can be traced to the Nigerian Frustration™️. It’s all bottled up until you get on the road and find random people to spew your bitterness on. Being a woman makes it easier if the angry party is a man, because most Nigerian men consider themselves to be better drivers than women; even those who have never driven a car. You meet those ones when you need directions, perhaps to get out of a tight corner.

Madam reverse … come … reverse …” then you hear ‘Gbam!’ and there goes your bumper and the insults follow:

All these women. Who even gives them cars to drive? Madam, don’t bother driving anymore, just get yourself a driver, which typically would be a male driver who can stand shoulder to shoulder with his fellow men on the mad streets of Nigeria.

As a female driver in Nigeria, what is your own experience in this regard? I’d like to hear the good, bad, ugly and new.

Dr. Azibanigha Scott: 6 Tips to Having a Healthy Skin