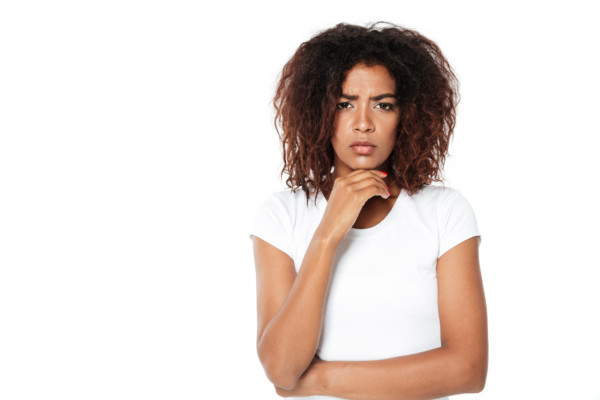 In the past few years, the rise of social media has birthed many online beggars whose major job is to come online, stalk people – mostly celebrities – and beg for money or other little things. Some have taken it to the next level by getting photos of people who are down with one form of ailment or the other and tell lies about being related to them and needing millions of Naira for surgery. The good thing about lying on social media is that after being maga-ed for long, many people now carry out proper investigations before making donations for a cause. In fact, some people visit the hospitals where the supposed sick person is being kept to make sure there’s truly a sick person and people are not just trying to make money by lying and duping people.

The case is different for Non-Profit Organizations in Nigeria.

With the many terrible things happening in our society today; the trample on basic human rights, hunger and poverty, violence and terrorism, health hazards, sexual assaults, trafficking, racism and many more, the world has seen the rise of individuals who are eager to come to the aid of people affected and ensure that, to an extent, they live a better life. Many NGOs have also sprung up to fight for victims and amplify their voices, seek justice for them, mobilize people to donate and cater to their well-being and work to generally give them a better life than the one they currently have.

However, there is another side to it. Every nook and cranny of our country is filled with NGOs and so many people are jumping on the bandwagon of activism. There’s a new thirst to be heard or seen fighting for something. While it is good that many people are fighting for a good cause, the proliferation of NGOs and Foundations today has made it difficult to detect those who are capitalising on the plight of people and making money off it from those who are genuinely helping people in need.

There are many NGOs doing amazing things in Nigeria, but we must not overlook the fact that for some people, establishing an NGO is a cool way to either make money, or cover up some tracks. For others, it is a way of gaining recognition, apply for grants and getting international awards. Unfortunately, there is no regulatory body properly regulating them.

When Do NGOs Become Too Many To Be Good?

With the sudden rise in the number of NGOs in Nigeria, one cannot help but suspect that there is perhaps more to this than meets the eye.

In 2017, Okonjo Iweala claimed that (some) corrupt politicians were setting up NGOs to cover up their deeds. It is also rumoured that many people who are into internet fraud set up NGOs or Foundations to cover up their fraudulent activities. Beyond Nigeria, Dinyar Godrej made extensive research into the growth of NGOs and the rot trailing non-profit organisations.

So if we have such (outrageous) number of NGOs in the country, why are we not feeling their impact? Why do we have just a few NGOs who are truly lending their voices to the plight of citizens in Nigeria and striving to make impacts on the lives of people?

There are a few theories:

One, many people assume that once you share rice and beans to people in slums, you can automatically qualify to become an NGO. So we have many NGOs springing up and all they do is call for donations to buy foodstuff and clothing for children, widows, the aged, etc. While this is not a bad thing, it is worthy to note that as an individual, you can easily render help to people in need without having to set up an NGO.

Again, setting up an NGO in Nigeria means that you get to enjoy certain benefits like tax avoidance, unlimited lifespan – which means that the NGO can continue after the demise of the founder, easier access to loans, protection from personal liability and so on. Majorly, the money coming into your NGO is not thoroughly scrutinized or, perhaps, not even scrutinized at all. This means that an NGO can be used as a channel through which money can be passed from one point to another without being checked or suspected.

Other (un-constitutional) benefits of setting up an NGO is access to local (and international) grants and awards, recognition, unpaid labour (in terms of voluntary services) and so on. 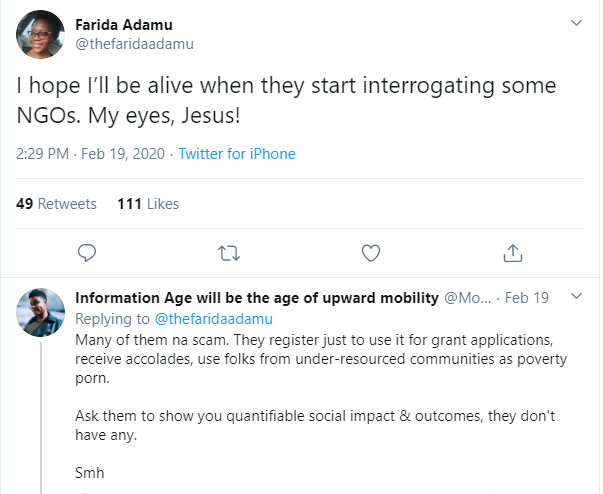 So Who Regulates NGOs?

In 2017, the House of Rep wanted to pass a bill to regulate NGOs in Nigeria. An aide to the Speaker of the House, Mr. Jibril alleged that “some NGOs collected funds for North East IDPs and disappeared.” This is almost similar to what a Twitter user alleged.

He also claimed that “some NGOs are used to fund the activities of terrorists and insurgents‎.” However, NGOs and civic groups kicked against the bill, stating that it was “anti-democratic and totalitarian“. The bill did not pass through.

In 2018, the Nigerian government announced the plan to profile all NGOs and delist those who were not committed to any cause. It’s 2020, and some NGOs that are not ‘committed to any cause’ are still operating. The Corporate Affairs Commission (CAC) who is ‘supposedly’ responsible for overall supervision of NPO registration and operations has perhaps, just like every other sector, failed in monitoring the activities of these NGOs.

This is not a call to bash NGOs or demean their input in making the lives of Nigerians better as much as they can. However, we cannot overlook the fact that many of these NGOs are money-making ventures and an avenue to channel funds from one point to another without being checkmated. Many NGOs are also set up to gain recognition, prestige, bag awards and get grants which, in turn, is used for personal gains.

How to Avoid Getting Scammed

Investigate, and do your research. Just like how people go the extra mile in ensuring that a tweep is actually telling the truth about the health of his family member or friend before donating, you can also ensure that an NGO is legit before donating money, foodstuff or gifts to them. If it’s a home for children or people living with disabilities or the aged, you could have a chat with them before donating.

Consult social media platforms too. There is always someone that knows someone who knows someone. Yea, it’s a small world. A good website and beautiful photos of children holding garri and corn do not determine a good NGO. Do your research. If possible, check if that NGO is registered and check their list of achievements.

If you are not totally convinced, don’t make donations to that NGO.

It is also important to speak up when you notice that an NGO is a den of fraudsters. Don’t look the other way because it is not your business. We must all be committed to ensuring that the world is a safe and crime-free place for us all.