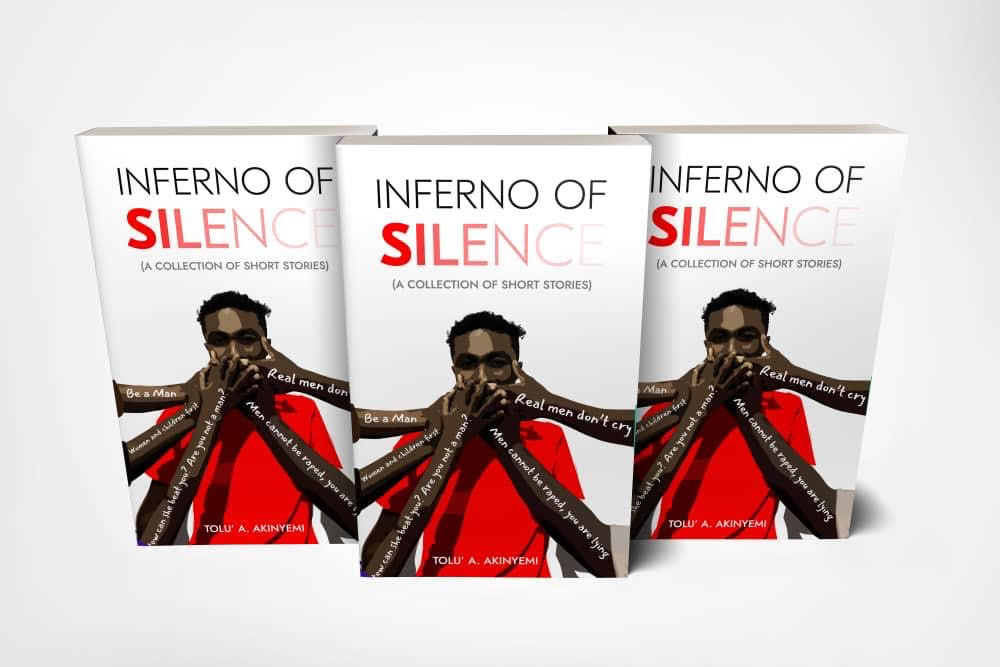 Tolu Akinyemi‘s Inferno of Silence is a collection of short stories – stories that will leave you thinking about the issues of the world and how humans can do better.

The book started with Black Lives Matter, the story of a young Nigerian footballer who was eager to seek his fortune in obodo oyinbo. Playing for a foreign league was a dream come through for Ikemefuna. However, what he did not put into consideration was that this new world will plunge him into an era of self-awareness – a sudden realisation that he is coloured in a way that is not fully accepted in a land that is far away from home. For the first time, his skin colour mattered and the impact of his nickname, Blacky, hit him every single day. Football is a game where to make it big, you have to abide by the rules. Passion drove every goal that Ikemefuna scored, but a greater passion drove him – his need to make a statement that black lives matter. These two passions are conflicting, like parallel lines that must never meet. It is either he dances to the piper’s tune if he wants to remain a great footballer, or speak up and lose his career.

Inferno of Silence is a book that highlights everything that is wrong with our society. After Black Lives Matter, which talks about racism in the Western world and how difficult it is for an average black African to find himself in a strange country, all the other stories are centred around African culture and traditions. Tolu Akinyemi is clearly trying to show his readers that as a Nigerian in the diaspora, he has not lost touch with his roots. You can take a man away from his country, but you cannot take his country away from him.

In this book, Tolu did not shy away from highlighting Nigeria’s numerous problems. In light of the #EndSars campaign, Tolu, in Black Lives Matter, described his best friend’s death and the ineptness of the Nigerian Police Force.

“Half an hour after the robbery, mean looking police officers adorned in shirts with the inscription  ‘Federal SARS’ arrived at the scene barking, “Where are they? Where are they?” They swayed from side to side, jumping up and down like amateurs in a war scene. When they could not get hold of any suspect, they chose their own suspect- Ogbonna, the driver.”

For me, the major themes in Inferno of Silence are family, corruption, mental illness, gender imbalance, religious and tribal extremism, toxic masculinity, and domestic violence.

Religious extremism is portrayed in two different stories: In Everybody Don Kolomental, where the loudspeakers from the churches and mosques pollute the peace in the city of Lagos. It is still this same religious extremism that made Shindara wail like a bushbaby and bang his head on the walls, on a Monday morning, because he was praying and casting out invisible demons.  In Return Journey, Ade lost the love of his life, just because his parents would not allow him to marry a Muslim girl.

In The Trap of Seers is a story that focuses on the desperation that grips many Nigerian mothers when their daughter is ‘ripe for marriage’ and ‘refuses’ to bring home a man. It is this desperation that drives Iyanu’s mum to visit different seers that’ll help her cast out the demons that live in her daughter, Iyanu. Today, it is Alufa Ijo, tomorrow, it is Babalawo, next tomorrow, it is Babaleye. This story also gives us a glimpse into how a failed marriage impacts a child negatively. Iyanu’s father failed to achieve his dream as a child and tried to force Iyanu to follow his own path. Iyanu’s mother is desperate to show that although she has a failed marriage, she is capable of moulding her daughter right. But it is in the process of bending her daughter that she broke her and in the process of breaking her, one of them had to cross the veil to the world beyond.

In Inferno of Silence, Tolu emphasises the need for men to let go of toxic masculinity and learn to walk away from an abusive wife. We live in a society where violence against men is not commonly spoken up and it is amazing that that is highlighted in this story. While talking about men, Tolu did not fail to talk about violence against women too. It is obvious in the kind of advice Kunle received from his uncle and father.

“All women are crazy,” he had said, “you just have to know how to handle them”.

“Handle not like a mother ‘handled’ a child, but more like how a Nigerian soldier ‘handled’ a belligerent danfo driver or how some women ‘handled’ the devil they believed possessed a slow housemaid.”

In this collection of short stories, all characters bear indigenous Nigerian names: Kunle, Ikemefuna, Odogwu, Umaru. The characters are also relatable: the domineering parents, the abusive partners, fearful citizens, the submissive wives, the inept government officials, the religious fanatics, and so on.

Tolu’s use of irony is strong. When Pa Akinwande’s shrine got burnt, all the gods that were supposed to cast out the demons from Iyanu’s body got burnt too. It is ironic that the all-powerful gods were rendered homeless by mere fire.

If you are looking for a book where thoughts were well described, I believe Inferno of Silence counts. Personally, this description of his mental health in Everybody Don Kolomental struck a chord in me.

I had my personal demons to confront. They came in different forms at the dawn of the day. The voices in my head at times sang hymns with a tender melody; those songs would heal a troubled soul at a canter and melt a heart of stone without batting an eyelid. At other times it broke things, minuscule things, and the not so petite. There are days the voices hold me by the jugular and lead me astray to dark places. I run a marathon with no finish line. I become a caricature. I fold and wilt under the weight of expectations. I consume silence as an overdose, hiding away my truth.

Generally, Inferno of Silence is a book to read if you are interested in socio-cultural issues. My favourite story is Trouble in Umudike, where Chinedu committed a huge taboo by sleeping with his father’s wife until she died. My second favorite story is Blinded by Silence, a story that has its setting in Northern Nigeria and its plot around marriage during Sani Abacha‘s regime. Blinded by Silence shows the nepotism and tribal intolerance average Nigerians display, even in the face of economic hardships. The story also reiterates the fact that being a ‘submissive’ wife, like Fausat, does not mean you’ll have a good marriage. My least favourite story is Return Journey – I don’t believe Ade deserved to die. For me, the story could have been so much more.

Personally, I found Inferno of Silence to be an enjoyable read.

These BellaNaijarians Have the Most Hilarious Barber’s Shop Experiences

Koyona Duke: You Want Your Products to Get to Your Intended Customers? Then This is a MUST READ!