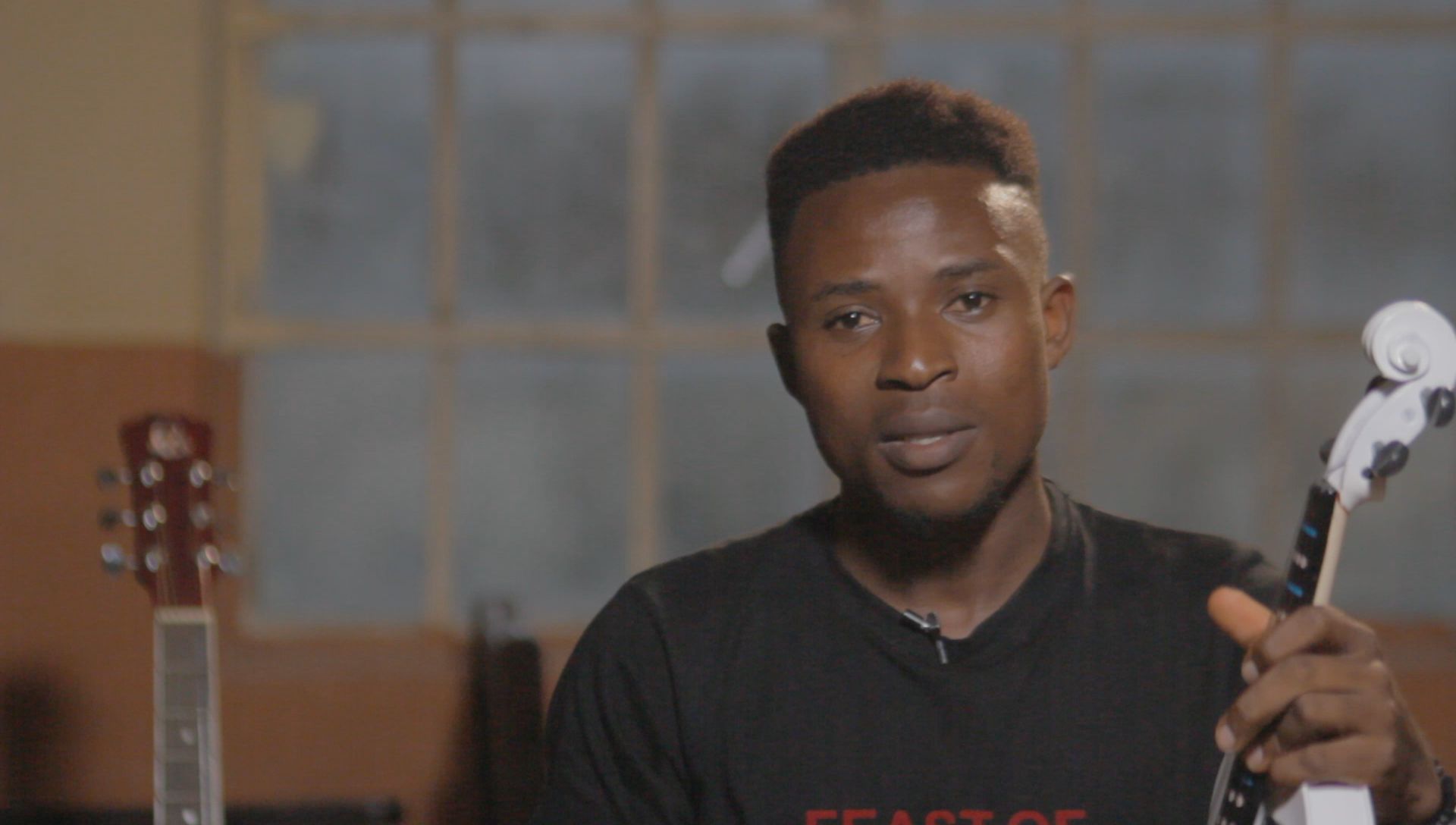 Tapshak Dakihas has always sought to improve the hand he was dealt, starting with his education. Later, he turned his attention to his first acoustic instruments. Now the self-proclaimed “tinkerer” is taking his musical innovations to new heights – creating some brand new sounds in the process.

“You cannot get this on any violin in the world,” asserts Tapshak Timothy Dakihas, 23, picking up and playing a note on a hybrid version of the violin he is holding, which is neither completely acoustic nor completely electric.

At first glance, apart from the white colour, the violin looks normal. Closer inspection reveals a number of electronic adaptations built into the face of the violin. There are modifications to the instrument that only Dakihas can explain. Then he puts the violin to his shoulder and plays. For the musically inclined, there is no question: this is a unique sound.

Dakihas is an innovator and has been one ever since he stumbled on a way to improve his reading while still at school, catapulting him from a level that caused his mother called to call him “dull”, to a level of excellence.

“My grades improved and my confidence, on believing that nothing is impossible, strengthened,” he recalled. “When you try something in a certain way and it doesn’t work you try other ways until it works.”

That early breakthrough resulted in a new attitude to life. Anything, he figured, could be improved on. That included his big love: music. “I love music and you know that musical instruments are not cheap so sometimes I sold my shoes, my phone…. Music has made me make sacrifices,” he said.

Not prepared to put up with sub-standard performances on poor equipment, Dakihas simply started improving on what he had at hand. His innovations gained impetus after he began playing in public, often to audiences that numbered in the hundreds. All too often, it was a frustrating experience.

“My first challenge while performing was either people hardly heard me or I was too loud. So when I got home, I started thinking, ‘what I can change to first help hear myself’?” he recalled.

Within a few days of his first public appearance, he had modified his violin with an output jack that allowed him to slot in earphones and listen to himself while playing the instrument.

Dakihas would soon face another challenge, however. At a major event where he was supposed to play alongside a keyboardist, he found himself having to follow music that he described simply as “rubbish”. It was a humiliating moment.

What followed were sleepless nights as he tried to figure out a solution to this new challenge. “If I can find a way to program songs and connect it to the violin, that way I can just play without another (accompanying) instrumentalist,” he figured.

He kept trying different modifications on his violin until eventually, after a period of two years, he had a breakthrough.

Now his violin records the music piece, and at the same time is able to output pre-programmed accompanying pieces, which the instrument outputs directly to a music system.

Dakihas soon realised that he could make a living solving similar problems for other musicians. Born and raised in Jos, a city of over a million in the heart of Nigeria’s so-called “Middle Belt”, Dakihas had the advantage of a ready market. Residents pride their city on its culture and the many talented artists connected with the city include Afro-pop artists 2face Idibia, Ice Prince, Charass, Jesse Jagz, top Nigerian rapper, M. I, and the highly decorated musical duo, P-Square. Musicians in the city were turning to digital to bring new sounds to their acoustic instruments. Tapshak was able to “tap” into that.

Dakihas is now getting more musical upgrade business from musicians across the country. “Sometimes I get really busy.” he explained. “What they could buy for 1 million naira, I can create using about 200,000 naira.”

Dakihas also believes that one day his talent for improvement will one day lead to him creating something the world has never seen. “My dream is to be the world’s leading improvement on musical instruments,” he said with a smile.

Money Matters with Nimi: Is There Art in your Investment Portfolio?