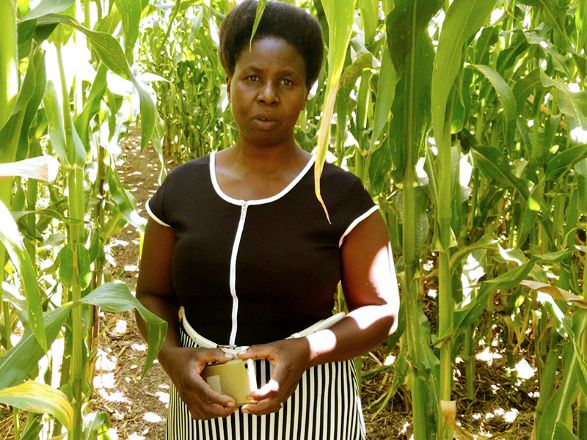 It is a sunny and clear mid-morning, and Teresia Momanyi is standing at the edge of her farm checking on the latest corn crop while wearing a very “un-farmer-like” outfit of a black and white striped skirt and a black top that goes with it. She also has a smartphone in her hand.

“I always undertake an inspection of my farm every day because that is how I can monitor the progress,” she said with a smile.

The 56-year-old mother of four, a professional accountant, said her life revolves around farming; she is a volunteer trainer of smart-farming techniques, besides managing her farm, which is also a model for many other farmers, especially those in her area. “My daily routine revolves around the farm, either preparing the farm for planting, applying manure, or harvesting,” she said.

The startlingly lush green plantation is well-manicured, a place she describes as her “office and employer.” “The farm is the source of happiness for me and my family.”

The farming journey started for Momanyi in 2010, when she was among a group of 20 women picked from her village for farmers’ training at the Rift Valley Institute of Science and Technology in Nakuru, a central Kenyan town long associated with farming. During the three-day event, they learned about conservation farming, and when she got back home, she decided to give it a try.

The result was phenomenal, she explained, and two years later, she decided to quit her job in the local bank to concentrate on what she said had initially been a side hustle. It’s not a decision she regrets.

“My husband was opposed to my idea of quitting my banking job. He asked me if I was going insane,” she said.

“But after only two years of this, my husband, who had dismissed my decision as insane, became my greatest supporter. He told me that I should have started farming soon after our marriage and not wasted time working in the bank,” she said, laughing.

Located 182 kilometres from Kenya’s capital city, Nairobi, the green forest of maize on Momanyi’s farm stands out in a region that has suffered poor harvests because of erratic rains. 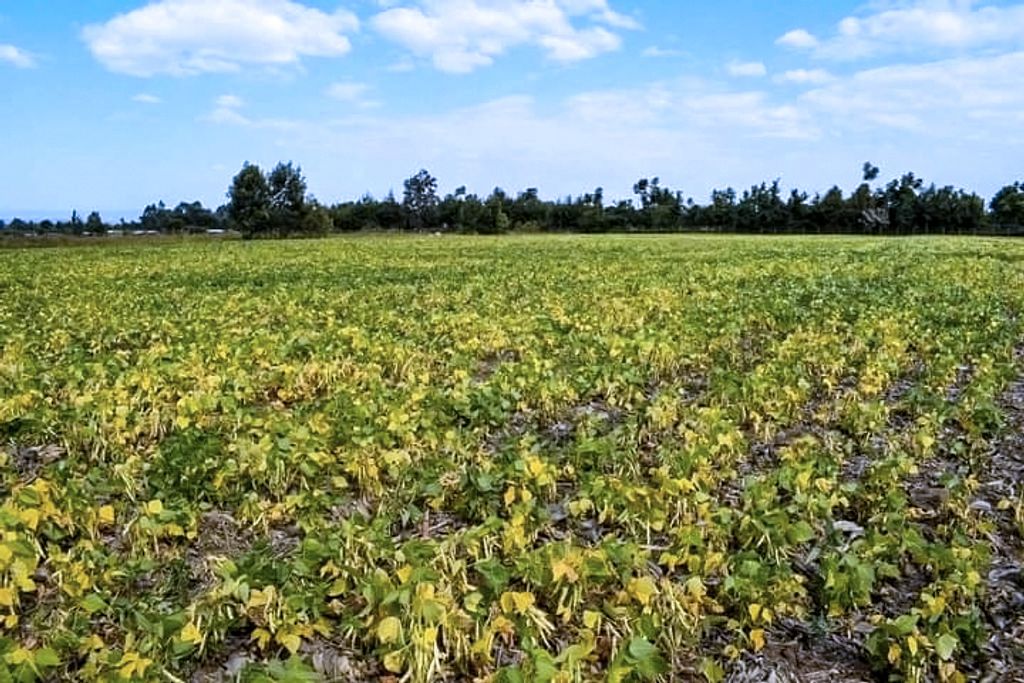 Momanyi’s fields are representative of thousands of smallholder farms across the region. In the early 1990s, Momanyi said, she would harvest at least 40 bags of maize per acre. But things changed in the mid-1990s when regular rains failed and the soil became depleted of nutrients, reducing her harvest to a meagre 14 bags per acre.

“Unreliable rainfall patterns over the past decades saw a decline in my harvest. Sometimes the rain is too much, while at other times it’s too little to sustain the growth of my crops. Prolonged droughts and rains have become the norm,” said Momanyi.

This was a big dilemma for Momanyi and many other smallholder farmers across Kenya. While for her, farming was not the primary source of income, for others, this was their livelihoods slipping out of their fingers as they looked on helplessly.

Those in the area who embraced it soon found their fortunes changed for the better. They can now count on better crops and more money, which will protect them from food and financial insecurity. Conservation agriculture also improves biodiversity and natural biological processes above and below the ground. This helps increase the efficiency with which water and nutrients are used, which leads to better crop production that lasts longer.

The International Maize and Wheat Improvement Centre (CIMMYT) says conservation farming is the future in areas suffering from erratic rains. It says not tilling saves farmers the costs associated with mechanical tilling of land because the farmer only needs to clear weeds by slashing or using herbicides.

In her 10 years of conservation farming, Momanyi said she has not only been able to increase her yields but also reduced farming costs. “Conservation farming consumes less time compared to the conventional way of farming. It does not consume a lot of inputs, and this hugely cuts costs,” she said.

“Before I embraced conservation farming, my budget on food was so high because I relied on market purchases due to poor farm harvests,” she said. With the surplus harvests from her farm, Momanyi said, she can make enough money to cater for other family needs, such as school fees.

Ngetich observes that the climate-smart farming technique gives him yields even when the rains are not sufficient. “The good thing about this farming method is that it is not fully reliant on rainfall, and I always plant ahead of other farmers who fully rely on rain,” he said. “Currently, I only spend a quarter of what I used to spend on (a) one-acre piece of land while practising conventional farming,” he said.

“Unlike in traditional till farming, this method consumes very limited inorganic fertilisers, which reduces the cost of farming.”

Agro-climatologist Kinyanjui Koimbori said conservation farming helps in conserving water in the soil and this allows early planting for farmers, which in turn leads to better control of plant diseases and pests as well as better harvest. “Conservation farming increases soil organic matter while at the same time suppressing weeds, and this works in favour of crops,” he said.

“It is the best way to work towards food security for smallholder farmers in sub-Saharan Africa.”

When land is tilled, carbon stored in the soil is lost to the atmosphere. “Conservation agriculture could help the world sequester up to 372 million tonnes of carbon dioxide equivalent per year,” the agro-climatologist stated.

Andrew Rotich, 64, a cleric and farmer, said switching to conservation farming was the best decision he’d ever made. He added that in the five years since he embraced the new farming method, his results have been far better. He has been a farmer for 20 years. “Initially, an acre would give me 18 bags, but with conservation agriculture, the same acre gives me 30 bags,” he said.

He added that his farming costs have also dropped.

“In conventional farming, ploughing an acre takes 6,000 (Kenyan) shillings (US$ 50) compared to the 2,000 shillings I spend in conservation farming,” he said.

Rotich says he now supplies maize to the government-run National Cereals and Produce Board, something he couldn’t do 10 years ago. “With conservation farming, I have enough to feed my family and much to sell to the board,” he added.

Koimbori opines that the country’s agriculture ministry should develop policies to extend the rollout of conservation farming across Kenya. “It has proven that it can work, and the results are visible. With proper policies, Kenya can beat the scourge of food insecurity and poverty among the lower and middle-class folks,” he said.

Related Topics:Teresia Momanyi
Up Next