BN Prose: How To Ride The Bus by Uche Okonkwo 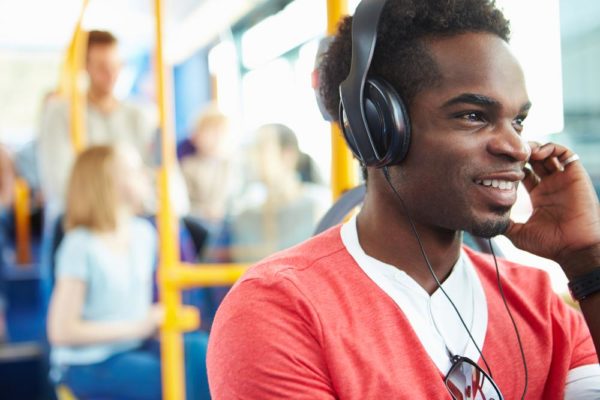 It’s Alade’s second week in Manchester and the wonder is yet to wear off. The brick buildings on Sackville Street still catch his eye; the double-decker buses, one of which he is riding in now, still cause him a childlike excitement; the pristine streets; the no hawkers and no traffic. The weather! They call it summer, but isn’t summer supposed to mean hot, or at least warm? He feels like he is inside an open-air refrigerator all the time, the sun shining bright but offering no heat. Even now he is wearing a heavy sweater and two pairs of pants, and is envious of his friend Dimeji, who, having spent over three years in the UK, is comfortable in denim shorts and a T shirt.

Alade has never seen so much white – the daylight, all that bare skin. Everything is so brilliant! He glances at Dimeji, who is sitting beside him flipping the pages of a magazine, like so many of the Manchester people Alade has seen on buses. It amazes him how anyone can choose to read instead of stare out the window at all the life passing by. Alade always insists on sitting on the top deck when they use the bus, to Dimeji’s amusement and sometimes exasperation. ‘You’ll get used to all this, don’t worry,’ Dimeji would say, with his usual gravity. But if getting used to ‘all this’ means becoming like Dimeji, part of Alade hopes he never does.

This place is nothing like Lagos, where Alade has lived all his life. Except that there are many Nigerians here; more than he had expected. He sees hordes of them, particularly when he goes around the Primark at Piccadilly Gardens. Piccadilly – he likes to say the name, just to feel it roll off his tongue. Pic-ca-dil-ly, like the beat of a happy song. Each time he catches a snatch of conversation in a Nigerian language he slows down and stares. If not for Dimeji tugging on his arm he would probably block the speaker’s path, with a huge grin on his face that screams ‘I am your Nigerian brother; what are the odds!’

The bus pulls up at a stop and people get on. Seconds later a woman carrying a toddler, whose hair is the same shade of red as hers, comes up from the stairwell. She takes the seat right in front of Alade and Dimeji, to Alade’s delight, and settles in as the bus continues down Anson Road.

Alade stares at the pinkish skin of the woman’s neck, at the freckles dotting her bare shoulders. He had seen white people in Lagos, especially when he went to ‘the Island’, but never up close like he does here, never like this. If he wants to, he can reach out and touch her, pretend he is brushing off a fleck of something. He likes the wispy hairs at the nape of her neck, the swirly pattern the curls make on the canvas of her skin. The rest of her hair is bunched up in a fetchingly untidy bun atop her head, and it bobs in time as she moves to the rhythm of the song from her headphones. Now he gets why every Nigerian female he knows wants hair like this – hair that can swing and bounce with every movement of the body; hair that can be so effortlessly long.
A pair of brown eyes peeks at him from behind the woman’s neck, and the rest of the face slowly emerges: rosy cheeks, a pert nose, lips the size of a grape and the colour of a strawberry. (It greatly pleases Alade that he is starting to think in terms of foreign fruit already.) He smiles at the boy, who responds with a blink. Alade has always been good with children, and he will not allow this little white boy with red hair to be the exception. Alade sucks in his cheeks, rolls his eyes and tilts his head. The boy smiles. Next, Alade blows out his cheeks and closes his eyes for a few seconds. He opens them again to find the boy gone. But then the boy peeks from behind his mother’s neck again, waiting to be caught. When Alade’s eyes meet his the boy disappears with a chuckle.

They carry on like this, Alade making faces and the boy disappearing and reappearing. With each round of play the boy’s chuckles become louder, his movements more frenzied. The boy’s mother looks back at the same moment that Dimeji glances up from the pages of his magazine. Dimeji does not look happy.

The boy’s mother gives Alade a small smile before looking ahead again. Dimeji shoves an elbow into Alade’s side just as he starts to make another face at the boy. Alade looks at his friend with a frown, and Dimeji mouths the words: Stop. It.

Alade is so alarmed that he obeys his friend at once, keeping his eyes fixed in front of him, ignoring the toddler who is smiling, shaking his head, waving his little hands, trying hard to catch his eye again. Alade has to bite the inside of his cheeks to keep his face from responding.
The bus reaches the next stop and the woman stands and hurries down. She steps out of the bus and Alade watches her as she walks up the road. He cannot see the boy’s face now.
‘What was that about?’ Dimeji snaps.
‘I should be asking you! I was just playing with the boy.’
Dimeji looks at Alade like he is irreparably stupid. ‘You were playing with the boy?’
Alade is not stupid. He might be a JJC here, but stupid he is not. ‘Yes, I was playing with the boy. Is that a bad thing now?’
‘Here, people get arrested for playing with children,’ Dimeji says, using his fingers to make air quotes around ‘playing’. The air quotes worry Alade.
‘But I wasn’t doing anything–’
‘I’m not saying you were; I’m just telling you how it is,’ Dimeji says. He tugs at his earlobes. ‘Keep your face straight; keep your smiles to yourself. Mind your business, and leave children alone, before you do the one that will make them call you a child molester.’
‘Ah!’
Dimeji shrugs. ‘I have told you,’ he says. He goes back to his magazine.
Alade stares out the window. It’s not as bright outside as it was moments ago. He looks up at the sky. A cloud is blocking the sun.

BN Reader, FOB, Shares The Story of Her Detention at the Geneva Airport Over the Authenticity of Her Handbag