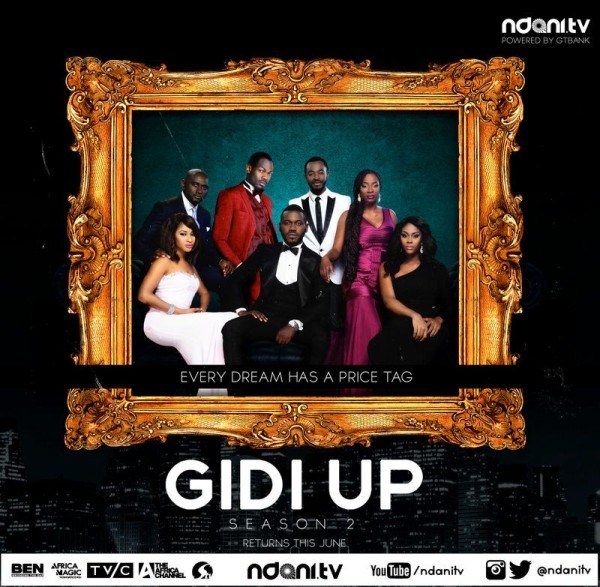 Last week was huge for the internet world!

Okay, maybe I exaggerate just a little bit, but after more than a month of waiting, Ndani TV finally released the final episodes of the second season of Gidi up. Commence binging!

For those who don’t know, Gidi Up is a short series by Ndani TV that follows the life of four friends living in Lagos and their “pursuit of happiness, success and independence”. So are you thinking flashy cars, flashy clothes, sugar mummies, sugar daddies, hot babes, and even hotter guys? Well, then correct! But more than that, Gidi Up is more than a superficial drama because laced within all the Lagos heat (temperature-wise and drama-wise) it also brings to the surface relevant societal issues.

Before I go any further let me warn you that this review may contain significant season spoilers.

Personally, I did not feel much of a pull towards season 1. It was neither spectacularly entertaining nor fascinating. It lacked that pull that shows like Game of Thrones, House of Cards, Scandal or whatever your specific brand of poison is that keeps the audience coming back. Most of the appeal of season one was in the presentation. It was the hype, the looks, the cast, the colors and, for those of us in diaspora, the nostalgia.

The second season, however, improves on the first. The presentation is better than ever and the photography is nearly impeccable. There is immense thought and coordination in every scene from the color coordination between the costumes and the sets to the angles of the camera shot. O boy, you do not need a degree in filmmaking to appreciate this art.

This season also brought a slightly new cast. Whether it is ‘new and improved’,  however, is up for debate. Amongst the new cast members include O.C Ukeje as the new ‘Obi’ and Titi Sonuga as the new ‘Eki’.

In the case of O.C Ukeje joining the cast, it is simply a stroke of brilliance. O.C adds to everything that he is involved in and not to fault the old guys but O.C killed it. The first time I saw O.C. as a ‘player’ was in the 2013 Charles Novia rom-com “Alan Poza”. In Alan Poza, his representation as a player seemed out of place, ridiculous and darn near comical. I did not believe a second of it! Fast-forward to Gidi Up and O.C has my heart – and yes darling, I will accept your offer. Please rip your heart out of your chest and write my name across it.

O.C: “How many times do you want me to propose to you? Do you want me to take my heart out of my chest and write your name across it? Because I would if that’s what it takes”

On the other hand we have Titi Sonuga who replaces Oreka Godis. And this is not my love for Ms. Godis speaking, but the highlight of her performance in this show was her braids. I spent more time marveling over exactly how many people are required to braid hair that long – I mean do they even make X-Pressions that long? – than I did believing her representation of her character.

Right next to the cast, colors, and photography (before we even arrive at the parties and cameos) the secret weapon of the season for me was Folarin – insert hashtag, #FolarinOfLife, #DeathbyFolarin, #OMGItsFolarin.

Folarin’s character is played by Daniel Effiong. Last season he was nothing but an errand boy. But hello season 2! Big things happened, and what can I say, boys go to prison and return as MEN.

The appeal of Folarin’s character is not in his looks or in his wearing a maroon checkered suit and bow tie – and he pulls it off well, if I do say so myself. The appeal of Folarin is in his audacity, in his unbridled no-holds-barred ambition, in his desire and ability to go and get it. If you ever liked Frank Underwood of the Netflix original series ‘House of Cards’ then you will know why I love Folarin. Kudos to the genius of the writers responsible for switching this inanimate character into the life of the party. When an opportunity was created for his character to fall by the way side, the writers took the “road less travelled” and turned the game up. Now, Folarin is playing with the big boys. Truth be told, I would watch an entire series, season after season, based on this character.

The show brings the laughs. It has amazing cameos, and genius script twists that it keeps you interested for long enough. The second season ends with many questions still left unanswered like : “what is up with Tokunbo, really?” “Is Obi going to get with the smart TV lady or is he going to finally realize that he is into Eki?” “What is going to happen to Jola’s rapists?” “I thought Ikechukwu was permanent cast now? Why is he in only one episode?” “Will Yvonne and Meka learn how to kiss without sounding like they are sucking on straws?”…

I guess we have to wait for season 3 to find out.

Woman Pretending to be a Soldier Rearrested in Ondo

Nollywood Reinvented is an online platform dedicated to providing unbiased reviews to the Nollywood and Ghallywood movie audience. Reviews on NR are rated by the reviewers and by other viewers to promote fairness. Visit us today at www.nollywoodreinvented.com.