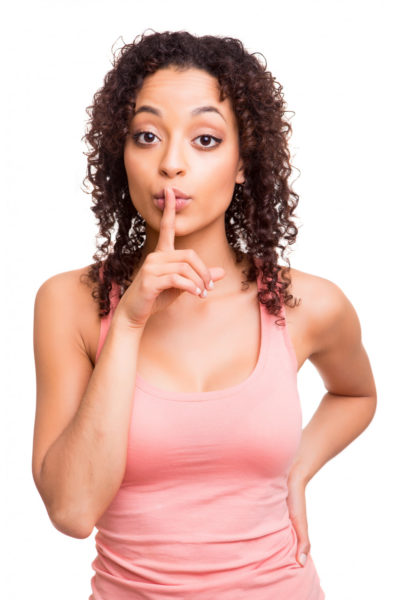 In 1996, there was an extended ASUU strike that led to a mass exodus from a lot of Nigerian universities. When the strike was called off, we resumed to half empty classes and hostels. For those of us for whom schooling abroad wasn’t an option, we pretty much just settled down to life as usual. Some of the leftover students were still making attempts to leave, and I had heard rumours that a friend of mine was planning to travel as well. Nobody had seen her all semester, and a few of us finally ran into her at the Faculty. After exchanging pleasantries, we asked her if it was true. “Ah, me ke? No oh! Where will my Father see that kind of money?” she responded, laughing hysterically. “I’m graduating with you guys oh!” Ronke travelled to the UK that very night.

That was the first time I experienced anything like that. I was soooo upset by the deception, and gave our mutual friend an earful! Did she think we were going to jazz her or something?! My friend, who did not take it personal at all, tried to explain to me that it was normal for people to keep such information to themselves.

Fast forward a few years later, when I had cause to travel frequently, first for school, and then work related. I was always so irritated by my Mom’s constant reminders to keep my travel information on the down low. So often would I roll my eyes at how paranoid Nigerians could be!

As the years progressed, I encountered it again in small measures, but it didn’t bother me much, especially as it was usually from distant acquaintances. This was until I ran into a good friend at a bridal shower, and happily inquired about her new husband (I had been her bridesmaid only a few months before). “Kunle is fine oh! He’s at home”. Imagine my shock when I later found out that Kunle was, in fact, abroad in Grad school, and his wife had gone to join him a few days after the bridal shower. I was so disgusted! Why lie??

Then I got married, and started this wonderful baby journey. One of my closest, longtime friends (our friendship dated back to our primary school days), was also trying for a baby. She and her husband had relocated to the States, but we chatted on Instant Messenger every single day, giving each other comfort. She had a very late miscarriage at some point, which was devastating, but she soon got back on the TTC wagon. You can imagine my shock when she called me on the phone one evening to tell me she had had a baby boy that day. It felt like I had been kicked in the gut. I congratulated her but then proceeded to cut her off, complaining to anyone who cared to listen about how betrayed I was by her deceit.

It wasn’t until my first IVF cycle failed that I understood why she had done this, and why most people are driven to being secretive. FEAR! And not fear of being jazzed, fear of disappointment, and the subsequent fear of having to face the people they have shared their happy news with.

Last week, I talked about how the heartbreak from the failure of my first IVF cycle was reignited every time I had to face any of the many people I told we were cycling, because it meant having to face the questions, the concern, the sadness all over again. For my 2nd cycle, I just couldn’t deal with that. So I found myself becoming a secret agent myself!

After my embryo transfer, I took it upon myself to hide away in the clinic for a few days, on self-imposed bed rest. I told some people I was away on a course, some I told I was travelling, and for the rest…well, their calls went unanswered. Then we got our positive result! We shared the news only with close family, and a few of our close friends. For me, that was a BIG DEAL, because anyone who knows me can testify that I wear my heart on my sleeve. I have no poker face whatsoever, and everyone typically knows what’s going on with me. I have absolutely no grey area. But not so, this time, not so.

At the 11 week mark, my bump became prominent, so there was no more hiding….well, that was for those that were able to see me. For the rest, I all but dropped off the face of the earth. Prior to my pregnancy, I was Madam Facebook, with status updates probably every hour, and picture uploads at least weekly. All that changed when I got pregnant. I’m not sure I even replied wall posts. And on BBM, only pre-pregnancy display pictures were allowed. Once, I put up a picture of my fingers, to show off a nail design I’d just gotten, but quickly pulled it down when a friend, who knew I was pregnant, said my fingers were beginning to look puffy. And the fact that I was having twins was even more classified information! I can count, probably on one hand, everyone who knew I was having twins. I remember eventually, but grudgingly, allowing my friends incorporate the twin theme into my baby shower. In fact, if my brother was not so quick to upload, on Facebook, a picture of me with the twins the very day I gave birth (and proceeded to tag me, to make matters worse), my Facebook family might have found out about the twins maybe on their 1st birthday.

A few months after I had my children, I picked up my phone to call my friend in the States, and we tearfully reconciled. And it was just as I had thought. After her first miscarriage at 22 weeks (a pregnancy she told me about pretty much as soon as she had peed on the stick), when she got pregnant again, she and her husband agreed they would not tell anyone at all. They only informed immediate family when they hit the 9-month mark. And I was one of the first people she called the day she had the baby…but yet, I chose to act like an insensitive brat. I was so ashamed of myself.

Since then, I have learnt not to take things like this personal. Everyone is entitled to privacy, in whatever mode or method they choose to express it. I got a call some days ago from a stranger, who was given my phone number by a mutual friend’s husband, to help plan a surprise baby shower for this mutual friend. Funny thing is I didn’t even know she was pregnant!!! A few days after the call, it was this mutual friend’s birthday and I sent her greetings on BBM. She thanked me, but still didn’t mention anything about the pregnancy. But rather than get upset, I have proceeded to actively plan the shower with the girl who called me, and hopefully the Mommy-to-be will have a wonderful time on the day.

The morale of the story is that we need to understand everyone’s situation before jumping into conclusions. And we also need to accept that we are not on a need-to-know basis with everyone. Accept whatever anyone decides to share, and accept that they have the right to keep some things to themselves.

And for my dear secret agents, ekushe oh! It’s not easy at all, on the contrary it is extremely energy consuming! But you must absolutely not allow yourself to be bullied or forced to share information before you are ready to. You must only share WHAT and WHEN you want to. Never mind if anybody chooses to take offence. Hopefully, the people who really matter will understand, and be there for you when you are ready to share.

Have a great week, everyone!