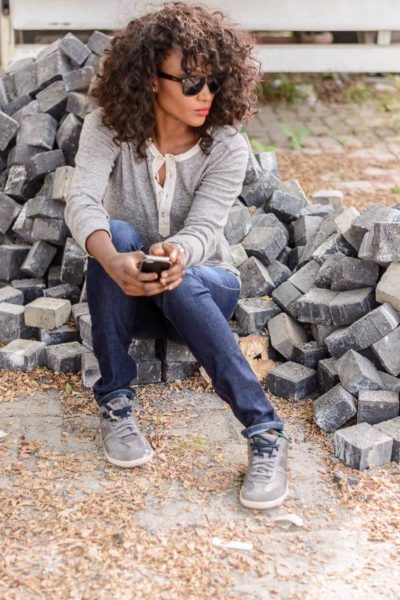 I was very tired and sweaty… and all I wanted to do was just get to my room in as little time as possible. It was the year when something strange had happened in Unilag and some students decided it was a grand idea to set the Vice Chancellor’s home ablaze. And in true retaliatory fashion, the “Unilag powers that were” decided to punish ALL students by first shutting down the school for months, only to open it and impose brand new laws which included banning all taxis into the campus, and putting a road-block beside the library – forcing all student car owners and campus shuttles to park far, far away from the part of the campus that concerned art students like me.

As if that was not bad enough, my temperamental car refused to start that day which meant that getting to school was more stressful than usual. To make matters worse, after 12 hours of slaving away in the studio, I had to trek – hungry and knackered – all the way from the Lagoon front to the campus gate to find a taxi that would take me to my hostel which was a ways from the main campus.

“Ahhhhh, finally!” I thought in relief as I stepped into the hostel’s spacious lobby. All I had to do was get through the Herculean task of climbing the stairs two floors up to my room. I longed for the relief of taking off my shoes, the stupid bra and let myself free of all constraints. I fully intended to all pass out on my bed, all sloth-faced and what-not.

“Oya, oya….” I hastened my tired legs to lead me closer sooner, when I looked up and saw a girl, stationary, ahead of me. I nodded a tired greeting and she replied quickly. I noticed she watched me anxiously – as if debating whether to speak to me or not –

A soft “excuse me… Isio?” told me she had decided to speak to me anyway, and when I turned around in answer I saw why she seemed so anxious – she had three bags stacked on top of each other beside her. My mind scanned her load in a micro-second: one overnight bag, one laptop bag and a gigantic Ghana-Must-Go bag that could fit a Goliath.

“Chineke! Sweet Mary, mother of Jesus, please let her be asking me for the time ooooo…” I had barely finished my silent prayer when she cut in…

“Could you please assist me in carrying my bags upstairs?” She asked me hesitantly.

I wailed to the heavens silently. To her I said, “Sure, no problem. What floor?”

Walahi, those two words killed me, I almost sputtered a laugh-cry in volcanic frustration! Then I looked at those blister-giving thin straps of the Ghana-Must-Go bag that looked alarmingly heavy.

Omo that was how I put hand in her matter o, literally. Together we were a comical sight, huffing and puffing sisteh’s load to the third floor. After that mountainous climb, she thanked me greatly and said she never would have thought I would’ve helped her. According to her, she had heard things about me from my former roommate, (whom I loved but knew liked to talk, talk, talk… {*insert side-note to former roomie* sorry na, but you know it’s true *chuckles*})

Apparently, my former roomie had told her something she found so perplexing she just had to share with me. According to her, she had asked my roommate (her friend) if she knew where I got my clothes from, to which my former roommate (who was a curvy UK size 16, while I was a size 6 model at the time) told her that the clothes I wore were hers that she loaned to me, and that because they were of such good quality, used to expand and shrink to fit both body types. As in, her clothes immediately shrank to my size when I wore them. Therefore, sisteh should look to her for hook-up for new clothes.

And then she (sisteh) said looking at me even more closely, she just realized how lekpa I was (no-offence she said) and how it was humanly impossible that clothes could expand and shrink with such “accuracy”.

Forget tiredness… I was just aghast. And then… I threw my head back and laughed! A deep, long and throaty roar of a laugh. Kai! Wetin pesin no go hear for this town? My laughter was so intense I had to wipe tears from my eyes. Forget anger sef, it was so out-of-this-world ridiculous, because at that time, said former-roomie was all #TeamCurvy, #ThickIsForRealMenAndBonesAreForDogs.  I was the skinniest I had ever been, thanks to a strict model-diet and Unilag stress. Plus sisteh’s words had brought up a very side-splitting visual of Timon and Pumba “dragging cloth”. Eezoookay. Share cloth kwa. God forbid bad thing.

I was too amused to take offence and so I thanked her for a good laugh. And in spite of all the ridiculous things I have ever heard about myself, I have to say, that is my personal favourite.

The second was what a magazine wrote about me and my relationship back in the day before I learnt to code my tinz like a CIA babanla secret Blacklist mission.  As in they went into details sha, about how I was planning my wedding in London, and my parents’ grand reactions and the possible location for their (not my own o) imagined wedding. Hian.

Well, it was about this guy, who is my parents’ neighbour. One day, my cousin rushed home to ask if we had heard the “latest gist”. She said he (let’s call him Dominion) was about crossing under Masha bridge when a speeding Danfo toppled over and fell on his head. Na wa o, Dominion’s head was SO STRONG that it pierced a hole into the side of the bus that landed on his head, even though the impact rendered him unconscious and he had to be rushed to hospital.

And even after all these years, I still peek at his head as he walks by. I can’t help myself. I know it is impossible that a bus fell on his head and not only did the bus “die” in his place, he managed to “chest” it. Like a boss.

I hope you guys are having a great Tuesday, and like always I would like to read your stories about the most ridiculous things ever heard about yourselves/someone else. (Ridiculous o, not malicious. People say malicious things but we dey chest am like Dominion’s head).