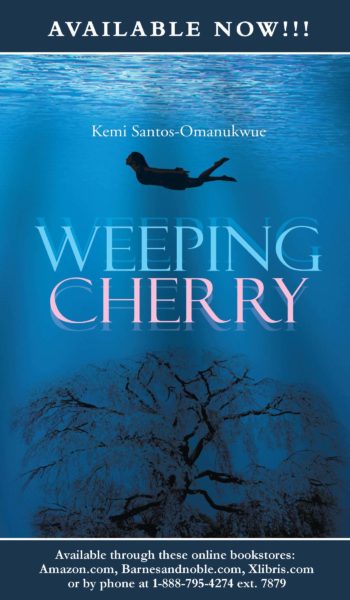 Plot Summary
Weeping Cherry is narrated by a 15-year-old teenager, Meredith Emarrow Hart, who lives with her mum and stepfather and attends high school in Canada. We find out early on that her birth father had an accident while rescuing Meredith as a child from their burning home; as a result, her father is confined to a home from the injuries sustained during the rescue. The book is centered on a school field trip to the Republic of Ireland, which Meredith wasn’t permitted to go by her parents. She ends up going by colluding with her aunty.

The story begins with the readers meeting Arcana, (Meredith’s best friend) and her boyfriend Demery, and his own best friend, Robin Lake, who all attend Ridden High with Meredith. They all end up on the field trip along with the school jocks, the catty social queen and her token best friend.

The field trip goes horribly wrong and the school group is divided into two by an incident where Meredith’s group find itself lost in a grand palace. They’re flown back home from Ireland after an accident.

When the students return home at the end of this unplanned misadventure, we find that almost all of Meredith’s family and friends (with the exception of her birth dad and beloved aunt, Cassie) are ‘mer-folk’ who go through painstaking measures to remain hidden in the human world.

Once home, the protagonist’s mother is forced to tell Meth her own side of the family history. She was born a mermaid and fell in love with Cameron Hart, Meth’s father; and for which she paid the price of being banished by the water kingdom. An evil merman, Mr. Stone (Twister as he is known in the water world) has enchanted Cameron and Meredith is obsessed with finding a way by which the enchantment may be removed.

Meredith finds out at the end that children born of mer-folk and humans hardly survive beyond 18 years of age and is told that scientists are racing against time to find a cure to save the 2 surviving offspring; Rurik from Russia and herself.

My Observation
Weeping Cherry is an amalgam of the most popular tween fantasy books of today. I see it as Harry Potter meets The Hunger Games meets Twilight. The mer-folk possess the power to read people’s memories and can eavesdrop on conversations. They can let others into their minds to experience their memories. This is very similar to the use of the Pensieve in the Harry Potter books with the most memorable being, when Harry Potter discovered Professor Dumbledore’s Pensieve and witnessed the trial of Barty Crouch Jr.

There is a nod to The Hunger Games on the trip to Ireland where the children find themselves alone in an abandoned building and they have race against time and the elements to survive.

The teen romance between Robin and Meredith mixed with the extraordinary powers possessed by Arcana, Demery and Robin is reminiscent of the Twilight series and Bella’s attachment to a creature from another realm.

The story line picked up very slowly and I found myself distracted a few pages in the initial times I picked up the book to read. I was able to piece together the different characters about 100 pages deep. The story line was disjointed and I had to make a conscious effort to remember bits and pieces of the lives of the characters, otherwise I had to go back to earlier pages to rejig my memory.

I love traveling through stories and I was pretty excited that the author was taking us to Ireland, but I was disappointed because the imagery wasn’t as vivid or lucid as I would have wanted. I even had to fact check the village in Ireland that was visited by the school.

Another issue I had to fact-check was the brown frog with purple spots that landed on Meredith’s hand while she was trying to catch a frog for her dissection lesson. Immediately I read that line I panicked because I imagined the frog to be a poison-dart frog, which is extremely poisonous to the touch for human beings. I was relieved when halfway into the book I discovered that it is a fantasy novel and I threw out the poison-dart issue.

The author is self-published and this is very evident in the output. The fact that the book was self-published may have taken away the precision of the editor’s correction pen. The book is littered with grammatical and typographical errors and several incidences of misused words. There is also a total lack of good sentence and phrase structure. One example that cannot be overlooked is the use of ‘seize’ instead of ‘cease’.

As I began to read the book I wondered if an adult who grew up in Lagos, Nigeria would write a very convincing tale of a North American high schooler. In my view the author did not do a very good job of this.