Tajé Prest: Too Big to Find a Husband? "Nigerians, STOP BODY SHAMING!" It isn’t Your Business Nor is it Your Place The minute I moved back to Nigeria two years ago it became clear that although 75% of Nigerian women are plus size, it isn’t celebrated and some people even frown upon it. A lot of Nigerian women will go out of their way to walk up to a complete stranger after they see you have no ring on, just to let you know that you are too big to find a husband, or that you should lose “small weight”. Then we have the uncouth family members that see you after a long time and even before they say hello, the first thing that comes out of their mouth to you is weight-related – “o ti put on” “omg you’ve added”… added what?

I’m the first to shut down negative comments and very quick to put you in your place. I try to avoid responding to older people’s snark but I’ll be the first to walk away if you try to ruin my day because I’m a size you’re not comfortable with. No need to say, “I’m sure she hates herself, she’s just pretending”, those are your own insecurities you’re projecting on the easiest target. Here’s my thing, if you aren’t close enough to the person then don’t say a word to them; keep your unsolicited advice to yourself. And if you are close to the person; until you notice that it is affecting their entire being, be it health or emotions, it isn’t your place either. Every plus size person is fully aware that they are big, they aren’t blind, they see themselves in the mirror every day.

Since I’ve moved to Nigeria, I’ve experienced some ugly behaviour. If I didn’t have tough skin I’d probably hide in my shell and never go out, I’m going to share some of my experiences with you just so you know you’re not alone. Body shaming is very common in Nigeria, its either you’re too big or you’re too skinny. To the trolls it’s either “you’re too big because you’re overeating and not exercising” or “you’re too skinny because you have no food” – there’s never a better reason for your size they don’t understand. 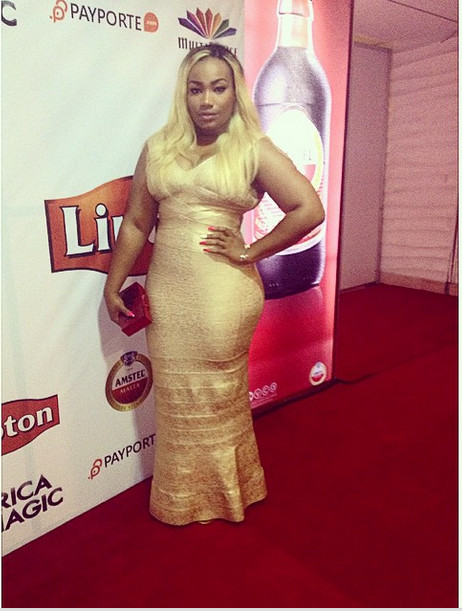 Let me digress for a minute; the ideal size for Nigerian women I’ve found is a small 12. That’s the size you need to be if ‘skinny’ isn’t for you and you want to be accepted. My thing is, why are you trying to be accepted by people that make no difference in your life?

There was a day I stopped to use an ATM in Lekki Phase 1 and some uneducated individual also waiting to use the ATM felt it was his due diligence to society to say, and I quote, “you should do some sports, maybe running or something.” I say uneducated because an educated man wouldn’t be so rude. His friend in his car heard him and told him off immediately. I laughed, and told him off with a two-part sentence, and walked back to my car. I smiled because his friend told him off so I didn’t have to say much and my appearance bothered him so much he felt he had to say something. Show-stopper or nah? 😀

Another experience was when I attended the AMVCA 2015 in a gold bandage dress with my arms out on the red carpet, which I usually don’t do. Social media platforms put out first photos on their Instagram pages and comments started pouring in. One person commented “she looks like the Malt bottle behind her,” another said “does she have friends?” Mind you that day I felt extremely sexy and nothing was going to get me down, everybody at the event kept showering me with compliments so really I was flying high.

There are a lot more examples but I’m sure you have some of your own, please do share. Let others know we’re all in this together. I’m going to use myself as an example; I LOVE myself, flaws and all. My weight is the queen of fluctuation. Because my body is the first to get tired of a workout routine or a meal plan and I have to switch things up from time to time but that doesn’t mean that I hate myself; in fact it’s the exact opposite. I love myself even harder because my self-love makes up for all the negativity that may come at me on the daily. Generally, it’s that my bum is too big it’s causing problems. This is a problem I embrace with open arms; I’d rather my dress fit with my curves sitting right than look straight as a ruler in a bodycon dress.

With her stretchmarks, rolls, cellulite and every flaw in-between, it isn’t your business nor is it your place to say something to the big woman you saw buying chocolate at the grocery store. It could easily be for someone and if it isn’t its not your business; let’s learn to leave everyone to live their lives, so people aren’t afraid to shop for someone else because the things on the list might cause glaring stares and whispers.

Body shaming is played out; from the plus size and ‘skinny’ people, we’re all over it.

Yung6ix says a “Friend” just tried to Shoot Him

Mina Martins: How Discovering My Husband’s Love Language Changed Everything