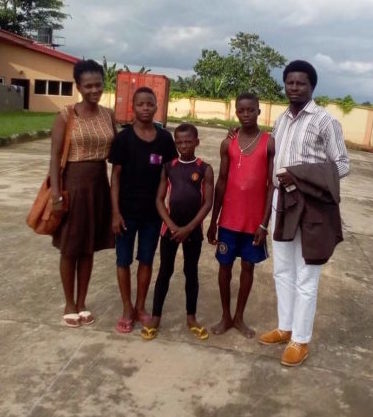 The issue of street children is a very popular trend in most emerging cities in the world. This is particularly so in developing countries, where the fabric of communalism found in traditional societies are almost faded. They are replaced by individualism which no longer prioritises and recognises child welfare as part of the society’s key responsibilities. This problem, also adds to the problem of inadequate social welfare structures by the state and immense existence of poverty rate that has varying high degrees in different regions. Therefore, it is easy to see children, teens and young adults engage in different menial jobs fighting for survival – like an average adult, on the streets. Some have parents or guardians, who are only nominally active in the child’s or teen’s life without taking welfare responsibility; others are orphans or products of mentally deficient parents who are unable to take care of them.

Cities are equally known to be sources of life changing opportunities. This is mostly due to the interplay of social, entrepreneurial and government development drives. These are used to induce high rate of geographical mobility leading to population and investment growth and generally, expand the economy of such regions; so who will really blame them as they troop into the cities in large numbers, like hustlers, trying to seek their own life-changing opportunities in different strategic positions of the cities.

At the epicentre of the city, Ibom Plaza, which octopuses into strategic roads leading to different parts of the city, one can easily notice a high population of children, teens, young adults, disabled, young mothers, aged and other vulnerable groups who engage in begging, petty businesses and services, or generally, “hustling” in the day. At night, any available space within the plaza, region becomes their bed. For 365 days, this is the living-cycle of some of them who cannot trace their homes, internally-displaced as a result of Boko Haram or just forgotten by relations and other care-givers. One of the major roads, Oron road, that diffused out of Nwaniba road, leading to Ibom plaza, equally seems to be a hotspot for the activities of street children/teens. From the morning that ushered in the bright sunshine to the mild sunset of the evening, at many traffic lights of the long Oron road, one can easily see group(s) of older children and teens, mostly boys, who are wielding foams and small bottles of soapy water, waiting for the STOP sign of the traffic light to show before starting frenzy windscreen clean-ups for as much cars as possible and waiting on the benevolence of car owners to drop change into their waiting lean palms before the light goes green. Specifically, the two-lane traffic light intersection of the Oron road seems to hold much promise for them probably as a result of multiplicity of routes there which present wider opportunity to engage with many motorists at the same time. The Maitama area of Ewet Housing Estate equally interests them.

The five months I have lived in the city made me to ask questions in different quarters. What are the state government’s plans for the social inclusion of these streetchildren into the affairs of the state? Is the government not keen to recognize the surge of these street children and teens as a social problem that needs utmost attention? Are the officials blind to notice that the relative peace the city enjoys, compared to other cities in Nigeria, will soon be a mirage in the next few years as these children and teens get older because of their vulnerable statuses, as so can easily be drafted into social ills by the expanding population? What about the Child Rights Act which I believe the state organs adopted? And why is everyone feeling unconcerned about them? Who are the urbanites really waiting for before taking up this challenge? Are they not seeing the danger of continuously excluding this group against access to social amenities which will improve their human capacity and channel them into the proper route of fending for themselves?

Experts agree that the issue of “street children” is a multi-faceted problem that stems from failures from the cultural, socio-economic, family system, traditional community welfare system, absence of proper social welfare scheme from government etc. This singular reason makes it impossible for government to tackle alone. No government can effectively tackle this without the input of different social actors of the citizenry. But where both the government and citizens are not bothered about them, there is an impending danger to the very society.

Footsteps of Hold My Hand Foundation, Uyo
Before my posting to the city earlier this year, I got connected to a young man, Benjamin Omin Itu, an ex-streetchild, who runs an NGO, Hold My Hand Foundation in Uyo and Abak, that tries to keep street children from harm by providing welfare benefits to them in terms of food, temporal shelter, retracing, security, restitution process and clothing courtesy of his savings and that of friends. We connected on Facebook and he equally attended the #streetkidsread, a literacy building event I convened for street children of Port Harcourt, under my NGO, Nwuliareads Initiative in partnership with Portharcourt Global Shapers Hub, for the celebration of the 2016 International Day for Street children in April.

His passion via his Facebook posts later captured me and still got me when I arrived Uyo which led me to the Foundation’s Abak residence on 28th August, 2016. I met six male street teens, in a room, laughing at the pranks they play with each other. The sheer new joy that lighted on their faces that a new face, visitor, came to visit them. Thereafter, tales of their pains and victories began.

He does not keep all the street children that identify with the foundation with him. Staying at the Foundation’s house is by choice. They are mostly orphans, little cared-for kids, children from mad women. Being assaulted, violated and raped are daily occurrence before they came to him because they were even sometimes seen as witches. I saw the darker scars on some of their bodies, some are still in the healing process. Sometimes, at the public place they slept at, some are kidnapped for rituals. No one will ever see them or even ask of them. They were peculiar cases too. There was Joseph, a street teen who got lucky and was adopted by a couple in Abak; he now goes to school, already in Secondary School. He is deemed like a god among others. Victor; he stole rolls of satchet milk from a provision shop and was nearly lynched; Benjamin was called and he rescued him and later began the restitution process. Victor paid back what he stole from the shop through working for the owner of the shop for a period of time.

Today, Victor still works in the shop and he is paid and even fed by the shop owner. The owner trusts him with his goods and money and this singular action has made him to become a better person who now abhors stealing and appreciates being hardworking. The noticeable changes seen among the street teens and children of Hold My Hand are that their sense of self-worth and value system is changing. Now, they yearn for school and feel ashamed when they see their mates on school uniforms when they go roaming the streets. Then the street children of Maitama, Ewet Housing Estate. Those ones run errands for the prostitutes that line up on that street and they are paid by being sexually touched. At this news, my jaw dropped. But these are regular tales in their lives.

One must commend these little footsteps that Hold my Hand takes and hope that more individuals, organizations, NGOs, and various government organs will do something substantially to improve their capacity by either giving them literacy education (going to schools) or expose them to one of the life-changing skills which will add more meaning to their lives. But before anything, their thinking pattern and sense of self-value and belonging need to be worked on.

Onosen Mike-Ifeta: You Must Never Crave Acceptance From People Who Won’t Give it To You

Chimezie Anajama is a Development worker, Sociologist and a Writer. Her development work with street children and teens inspired the “Street Rules”. She is currently co-campaigning for #iMatterToo Uyo Street Children Project to give alternative education to 30 street children/teens. Tweet her @ChimezieAnajama