A wise man once said you could arrest a man, but you can never arrest his mind; his ability to think and his ability to dream. Another wise man advised to always guard your mind jealously, because out of it flows the issues of life. The mind is the place greatness and failure starts. Wherever you are today is the result of the state of your mind and what you feed it.

Therefore, it is important to note that people with robust and positive mentalities were not born with it. They all learned it, and all possess similar key traits. Here are some of them.

They Don’t Cry Over Split Milk
In life, there is limited time, and there are few things within our control. It is better we invest in those things we can control such as THE NOW. You can’t change the past or control it, so why do you invest so much time in it. The only thing the past gives to us are lessons learned. I remember a time when I invested a good fraction of my savings into a business venture; to cut a long story short, I lost all my investment. This was shortly after I finished my university degree. Of course, I was upset, but one thing I didn’t do was drown in “my sorrows.” I took some time to reflect and learn from it. If we cry over the past, we will never move forward. I never met a man who gains constant momentum forward by looking back; the same principle applies to go ahead in life.

They Focus On Their Goals And Not Other People
During the Rio Olympics, there was a famous picture that went viral involving two athletes (Michael Phelps and Chad le Clos) competing in a swimming competition. 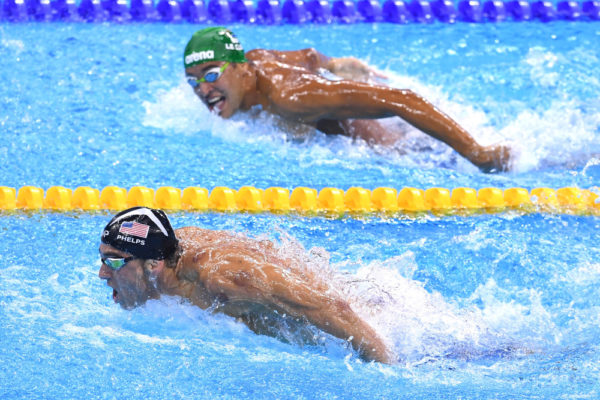 There was a quote that followed the picture which said: “Winners focus on winning while losers focus on winners.” Focus on your goals and stay in your lane. Even when you have your competition ahead of you, you shouldn’t still focus on them; when you do, all your efforts will be put into getting ahead of them which is not a sustainable way of winning. This is because most times when you get ahead of the competition, you become complacent. This is because all your focus and attention went into defeating the competition. The real way to win is to focus on the long-term outcome, even if it seems like you are losing in the short term.

They Don’t Let Fear Stop Them From Achieving Their Goals
Life is full of uncertainties, and this is what makes life interesting. Mentally strong people never let the fear of the unknown prevent them from trying, let alone achieving their goals. This is because they understand that fear is something that we create, and it doesn’t naturally exist. Every time fear kicks in, we must remember that we created it and whatever you are scared of, someone else who is no smarter than you has overcome it.

They Don’t Give Up Early And Expect Early Gratification
We live in a world where things are turned around quickly, we have two minutes Uncle Ben’s rice, next day delivery. However, strong people understand that same principle doesn’t apply to life. Whatever is worth doing is worth doing well and worth being committed to. When starting something new, whether it is a new job or a new sport, it is always difficult at first. However, difficulty is one of the key phases of success. In fact, I have noticed that people usually give up just when they are about to receive their reward. The key to sticking to it is ensuring that you do what you love and you will find out that what you do will also love you and make the pain of starting easier.

They Give Without Expecting To Get
Mentally strong people understand that true secret to long-term success lies in one’s ability and capacity to give without expecting to receive. You should understand that selflessness is not only a good trait, but it is a long-term winning strategy. Think of it this way, the reason why you purchase most things or you have a best friend is because you believe value is added to your life. You will never purchase something that doesn’t seem to give you more value than the price. With the same principles mentally strong people understand that to be demanded or desirable long term, they most add more value (i.e. give) than they receive.

"Ife was listed in the Top 100 Outstanding Graduates by the Future Leaders Magazine, UK. He has interned in top global brands like Accenture, PwC and Deloitte. He is a big believer in giving back to the community through any capacity possible. He describes himself in three words: Purposeful, Passionate and Proactive. Ife loves building and mentoring future leaders." Twitter: ife_tokan LinkedIn Ife Ade Tokan